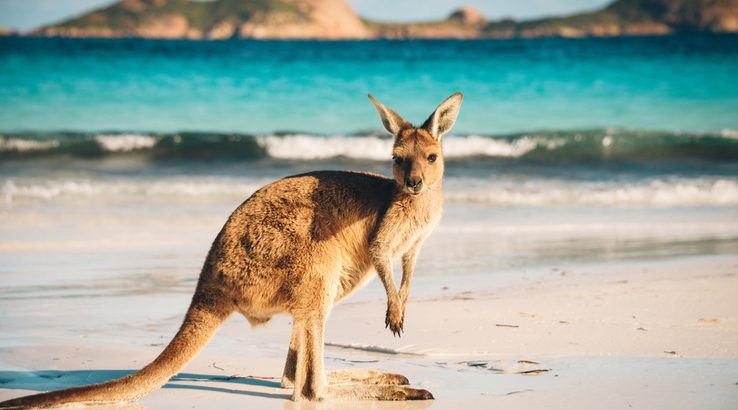 Australia is fielding an exceptionally diverse set of tourists.

This year's International Visitor Survey results are showing an all-around increase in visitors, and a particularly sharp increase in visitor spending, especially among visitors coming to study in Australia. Overall, the number of visitors is up 9%, while spending is up 7%.

However, Australia's popularity may be flagging among its traditional visitors. Only 2% more travellers arrived from New Zealand this year, spending less per person on average, while the number of visitors from the UK only increased by 3%, and their spending dropped by a significant 8%. The stereotypical image of the British backpacker on a shoestring budget might hold truer than ever.

On the whole, it's looking like Australia is becoming more popular in other countries, where it hasn't previously had much of a presence. The number of visitors from countries other than the top ten increased by 11%, while spend from these other countries was up by 10%.

Both of these are above the overall increases of 9% and 7%, showing that Australia is casting a wider net than the year before, and attracting visitors from a more diverse range of countries.

For a highly desirable yet far-flung destination like Australia, prepaid travel packages seem to be the key to attracting visitors. The countries that sent way more visitors to Australia this year were also some of the keenest on prepaid vacations.

42% of the money spent by visitors to Australia is spent before they even arrive, on airfares and other transport, pre-booked accommodation, food and drink packages, planed tours, entertainment and other arrangements. This prepaid component was as high 57 for travellers from Japan, and a 62% for US visitors, both of which saw sharp increases in the number of tourists arriving.

It makes a lot of sense. Australia is far away and expensive to get to. Pre-paid travel packages can be a lot more affordable, and put a much clearer price tag on the trip. And because it's such a desirable destination, travel agents and other providers have every reason to put Australia on sale.

The constant rise of online travel services is also a contributor. Gone are the days of phoning around for a hotel after arriving, or joining a tour group on the advice of a hawker on the street. By shopping online before departure you simply get better prices, frequently better quality and reduced hassle.

The shift towards prepaid travel

Of all prepaid expenses, international airfares were unsurprisingly the biggest. These flights accounted for 20% of all money tourists paid before leaving home, and will naturally need to be booked in advance.

But package tours were more than half that, accounting for 11.3% of the prepaid spend. Drawn by great value, visitors to Australia ended up pumping $4.3b into Australian package tours before they even left home. This was more than food and drink and accommodation (3.2%), education fees (5.7%) and everything else (2.1%) put together.

The same is true in reverse. Prepaid travel packages are probably one of the reasons Flight Centre became such a ubiquitous fixture, while Australians are learning to love prepaid tours as a safer and more reliable way of seeing exotic destinations, rather than sticking to the best-trodden paths.

The countries that are falling in love with Australia this year are embracing prepaid travel, and it's likely that the prepaid proportion will continue to grow thanks to the miracles of the internet age. Travellers are discovering that there's no real reason not to check for deals before leaving home, and to grab them if they suit.

In particular, it's safe to say that accommodation will start shifting more towards the prepaid. Just a few years ago it was fairly common to pick a hotel off a bulletin board at the airport, and then use the courtesy phone provided to call and ask for a room.

But now, travellers can now get neat lists of practically ever hotel, hostel, B&B, lodge, resort and rental property in town, and then instantly sort them as desired, check prices, availability, reviews and photos in one place, and can even see exactly how many rooms are left in each, how many people have made bookings there in the last few days, and get it all wrapped up in a best-price guarantee.

For the best prices and options, everything is best done before departure, and in the realm of prepaid travel.