New research suggests that Sony's PlayStation 5 will be carrying its momentum from the PS4 into its next-generation war with Xbox Series X.

London-based search agency Rise at Seven has released some intriguing research less than two weeks out from the launch of the next-generation consoles. There's plenty to like about both the PlayStation 5 and the Xbox Series X. Both consoles offer compelling but different ways of approaching the future of gaming.

However, this new data suggests Sony is in the box seat. You can read our hands-on impressions of the console and also our review of the incredible DualSense to form your own opinion. 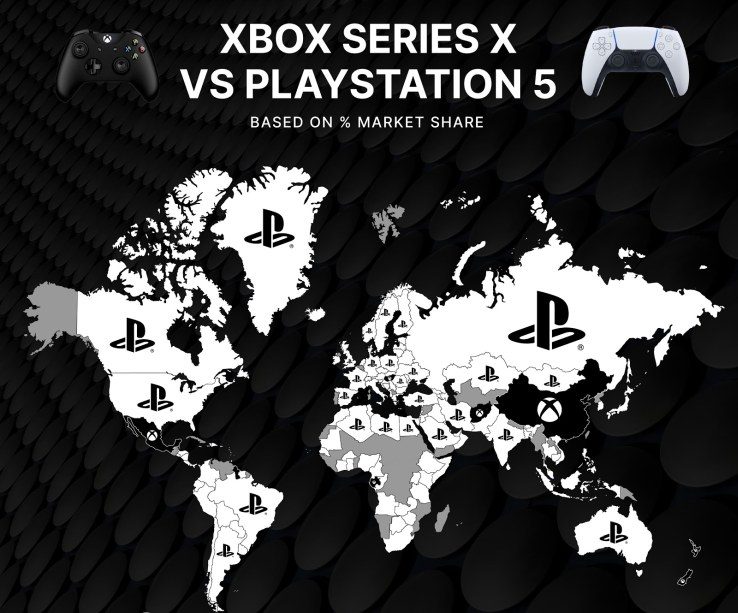 Where did the data come from?

Rise at Seven bills itself as a creative SEO agency and has GAME listed as one of its clients. You wouldn't think that the UK-based retail store would have a preference for either Sony or Microsoft. We're sure it wants to sell a lot of both consoles and their games. So, we'll at least assume there is no inherent bias in this data.

As for how the figures were acquired, Rise at Seven claims to have analysed global search data. It points to the fact that, as a result of the coronavirus pandemic, the majority of consoles this generation are being bought online, making it easier for them to ascertain the demand in each region.

The company analysed 161 countries around the world. In doing so, it's discovered that a whopping 148 of them – or 84% – are seeking a PlayStation 5 over an Xbox Series X.

Update: Pre-order stock is currently sold out, but you can register at the links below to be first in line when the second batch is released.

See all PlayStation 5 products at Amazon

We used global search data and online market share to find out which of the new consoles is the most popular in every country right now- Xbox or Playstation? - Carrie Rose, co-founder, Rise at Seven

A breakdown of the key territories is listed below.

Perhaps a key bit of data not included in this study is the search volume of each country. This would impact the console sales potential of each nation relative to the overall global potential. But looking at the 13 countries that are Xbox Series X aligned – Afghanistan, Gabon, American Samoa, Cayman Islands, Mexico, Anguilla, Guyana, China, Jamaica, Monaco, Hungary, Belize and New Zealand – that may make it an even more commanding PS5 victory.

While this study is fun water cooler talk and perhaps reflects the momentum of the PS4 and the existence of a new Spider-Man game in the launch line-up, it's unclear how deep the agency search went. They bill themselves as experts and we'll just have to take them at their word. But from what I've seen, the argument between PS5 vs XSX isn't as clear cut.

DualSense PS5 controller review: Gamechanger, gimmick or both? VIDEO: Xbox Series X unboxing – What you get on launch day