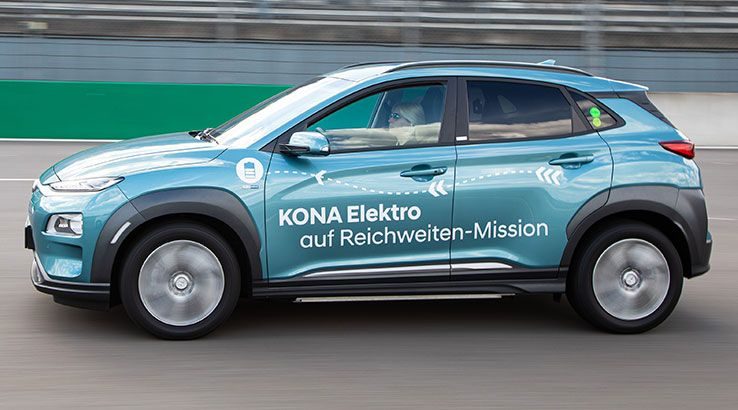 Hyundai used its small Kona electric SUV to travel over 1,000km on a single charge, earning a record in the process.

Hyundai started with the goal of travelling at least 1,000km between recharges. It logged three runs, each over 1,000km on a single battery charge, managing to break its target across the board. 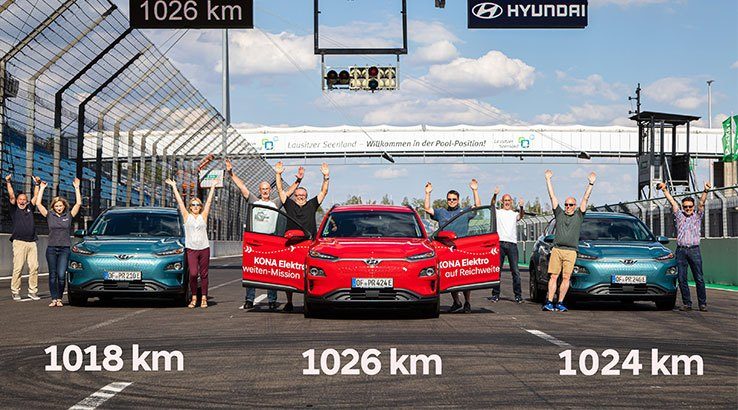 The final distances travelled were:

Averaging out those figures, we get a staggering 1,022.93km! What's more impressive is those figures are the maximum ranges of most utes and beyond many combustion-engined passenger vehicles with small fuel tanks!

The figures stack up pretty favourably against rivals too. The longest-enduring Tesla, the Model S Long Range, is good for around 610km. Its second-best performing model, a Performance Model S, will last 590km between charges.

How Hyundai set an EV record

Hyundai used the three Kona EVs to set the record, which is for vehicles with a 64kWh sized battery. The three SUVs were driven by three teams, one from German automotive publishers, Auto Bild, along with two groups from Hyundai Germany.

They then drove for 35-hours solid around a racetrack in the northern region of Brandenburg. The test was independently monitored by a local vehicle testing company, called Dekra.

Were the tests realistic?

The conditions were designed to mimic typical inner-city driving within Europe. That meant average speeds of 29-31km/h. The vehicles were left completely standard, exactly as they would come from the factory production line. They wore the standard treads fitted to EU market Konas, which are low rolling resistance tyres by Nexen. The vehicles all had DRLs, which remained on throughout the three-day marathon.

The only concessions made were the teams couldn't turn on the radio or A/C.

Obviously, the teams were on a closed race track, not a public road system, so there were fewer wildcards thrown at them. Things like traffic lights and other cars weren't present, which can impact on efficiency. Also, the cars were driven till the batteries were flat, reading 0%. This meant they rolled to a stop.

But other than that, theoretically at least, it shows what's possible.

The end of range anxiety?

"With this test, the KONA Electric confirmed what many of our customers already know: it is a reliably efficient and eco-friendly lifestyle SUV that is practical for everyday use", Keller stated.

That's quite true, considering the last census showed most working Australians travel less than 32km for work each day.

Keller asserted that Kona drivers have confidence that their car can go the distance.

"Customers driving the KONA Electric or other Hyundai EVs can expect to drive long distances without recharging or feeling range anxiety", Keller added.

Driveaway prices for the Kona Electric start from $63,532. The car has an official range of 449km and a 5-year, unlimited-kilometre warranty. Hyundai covers the battery with an 8-year warranty.

If you're interested in purchasing the award-winning, and now record-setting, small electric SUV, you must read our comparison Hyundai Kona review. We have also produced an electric vehicle guide, which will help you understand what to look for in an EV. You can also compare different models on that page.