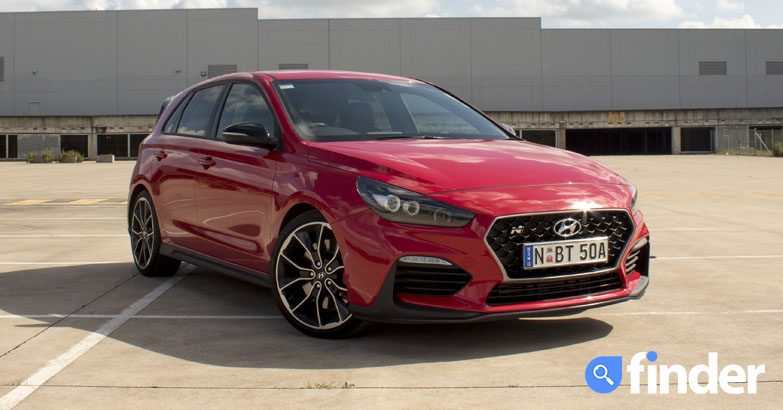 Can you guess what "N" stands for?

Whenever I pick up a test vehicle, instinctively I check to see what the car's current fuel consumption is prior to driving it. If it is higher than I think it should be or is supposed to be, it often becomes a challenge to see how low I can get this figure or if I can get it in line with the officially published numbers by the manufacturer.

The case was no different with the Hyundai i30N. When I hopped in and saw that the vehicle was currently guzzling 16.1L per 100kms, it was a "challenge accepted" moment. It was time to see how low we could get the fuel economy in this thirsty hot hatch. That is until I discovered "N" mode – which in this instance stood for "No chance".

The i30N is the Korean firm's first foray into hot hatches. As with Kia, Hyundai has recently gone about snapping up all of the heads behind the sporting divisions of companies like BMW and Mercedes in order to improve their vehicles – and it has been working.

With the i30N, you get aggressive but understated styling. The model we tested was red with black accents and had a spoiler with a triangle brake light that you would expect to see as Lewis Hamilton flew past you at Bahrain. Looking at the package they have put together, the i30N definitely looks feisty.

Inside is probably the one area where you are going to notice that it isn't European. There is a combination of hard and soft plastics, along with faux suede, but truth be told, it has been executed pretty well.

The racing style seats hold you in spot as you torque steer around and the infotainment system is pretty good. You get Bluetooth, Apple CarPlay and Android Auto as well as satellite navigation, which tells you accurately where to go and more importantly where the speed cameras are – you will need that.

There are other features too, like heated front seats and steering wheel, dual-zone climate control, lane-keep assist and parking sensors among other things. 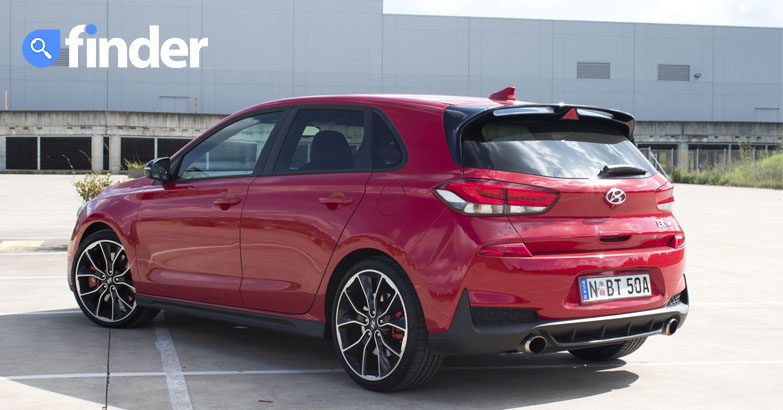 Sitting in the back is probably what you would expect from a hot hatch; you'll feel like the rear serves only as a place to carry a motorsport approved fire extinguisher. You get some storage bins in the door as well as storage pockets in the back of the seats in front of you. There is a fold down armrest and cup holders from the centre seats, but that it about it. Rear passengers won't get air conditioning vents or USB points for charging various devices. There are also ISOFIX mounting points to securely fasten child seats.

It is a tight squeeze in the back. With the driver's seat in my driving position (I'm just over 6 feet), I had to have a knee at either side of the driver's seat. But by the same token, I am having the same issue with the Toyota Corolla I am currently testing.

There are all the usual steering wheel controls that you find on cars these days: voice assistant, stereo volume, cruise control and a trip computer. The two that stand out the most though, and in my opinion the two most important, are the large blue "driving mode" and a chequered flag.

Thanks to their "bulk buying power", Georgie are able to help you buy the car you want and potentially save you money too. In fact, the average saving through Georgie is $4,616.
Promoted Find a Deal on Georgie's website
Driving mode lets you switch between Normal, Sport and Eco settings, all of which make adjustments to suspension, throttle response and various other technical stuff to make the car handle more like the respective configuration names

Whichever mode you are in though, the suspension is firm – again as you would expect from a car that is designed to get around the Nürburgring asap. Sport makes the exhaust note a bit more shouty while Eco, as you can image, tones it right down to a whisper.

Then there is the chequered flag, which in German translates to "N Mode" and which I call "crack mode". Not just because it is highly addictive, but because it makes a bunch of changes to the exhaust and introduces a rev-matching feature. The result being mass amounts of cracks and pops on upshifts and downshifts. Bringing out the child in me, I'm not sure I spent more than 10 seconds in any one gear. Hyundai has definitely nailed how a hot hatch should sound. 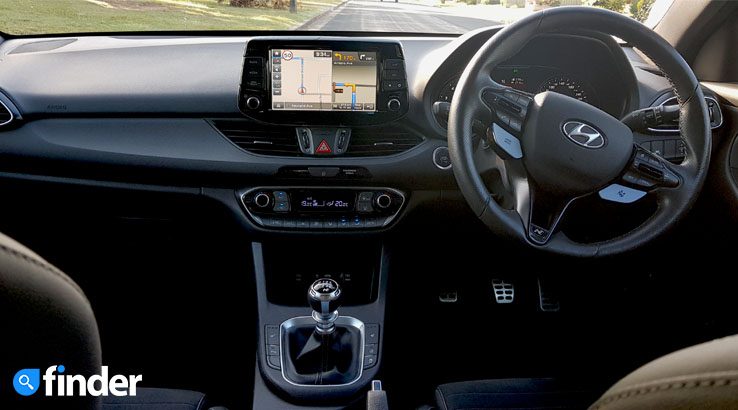 Engineered at the Nürburgring, steering is sharp and precise. It also has a great weight to it, delivered through a nice chunky steering wheel. The 2-litre turbo engine produces 202Kw and 353 Nm, which ensures there is plenty of torque steer and wheel spin should you bury your foot through it.

And the above is significant. If you are in the market for a hot hatch, you would be silly not to have looked at and considered the Golf R, which boasts 213Kw and 380Nm of torque but VW charges $15,000 more than Hyundai. Sure you don't get the leather interior, but you also get a manual gearbox, though that may be a pro or con depending on your preferences.

The Verdict on the Hyundai i30N

This is a serious, smile-inducing hot hatch. It is a great first attempt from Hyundai, and I am excited to see what they can produce next.

I haven't test driven the Golf R yet, but I am pretty confident I know what I would do with my spare money.

I can't wait to see both the next iteration of the i30N and also where Hyundai implements these new N models. They have already come out with a fastback i30N and rumours are swirling about a potential Veloster N. We can't wait to drive them all.