Quick verdict
An impressive first effort for HyperX. This is a stylishly designed mic that will deliver the goods for newbie streamers and hardcore veterans alike.

Seeking to ride the rising popularity wave of live streaming and YouTube content, peripheral maker HyperX has decided to release its first ever standalone microphone. This new baby, christened the HyperX QuadCast, certainly has no shortage of rivals in the high-quality audio-video equipment space – the most notable being Razer's Seiren X and the Samson G-Track Pro. Be that as it may, what has been delivered here is less a speculative first attempt and more of a smashing debut home run.

Basically, if you're looking for a USB mic to live stream, create YouTube content or podcast with, I think you'd be hard-pressed to find a more reliable and features-rich product in this price band.

Call me shallow, but my love for the QuadCast begins with its looks. You're getting an all-metal cylindrical body, and the bonus shock mount is firmly affixed with screws and some eye-catching red elastic chords. Admittedly, when the central LEDs are lit up like a miniature stop light, this is an aggressive-looking microphone. An angry beehive of a hot mic. For most gamers that's a plus and some much-desired visual street cred.

I should also point out the unit ships already mounted to the desktop stand and shock mount, though there's also an adapter included to let you connect everything to a third-party (non-provided) boom arm. If you're a console streamer I think you'll want to take this option, because in its tabletop configuration the QuadCast is quite squat. You'll find yourself hunching forward towards it on your coffee table. 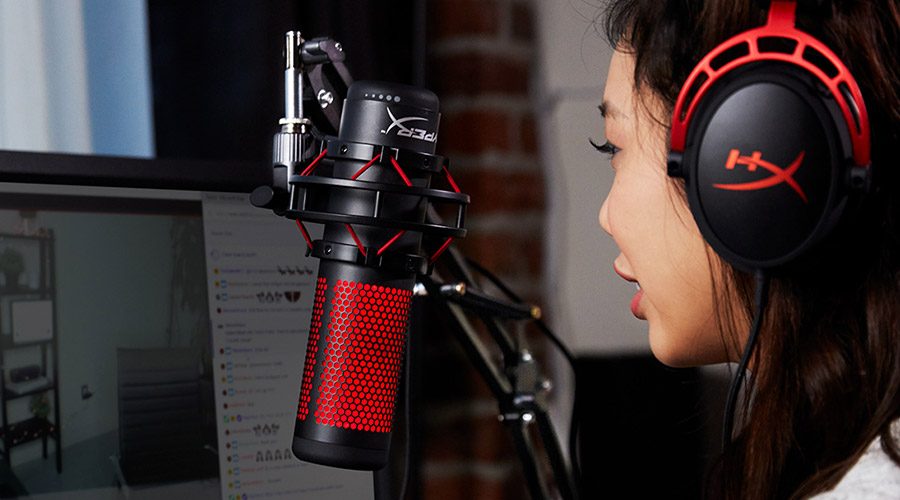 Straight away I like that the means to control mic volume eschews sliders in favour of just having you horizontally twist the base of the unit. It's less fiddly and easy to achieve when you're mid-session and absolutely cannot divert your eyes off the screen, even for a second. Likewise, muting yourself is a matter of tapping a button that encapsulates the entire top of the unit. Doing this will extinguish the angry red LED lights that adorn the main shaft of the microphone. There's simply no mistaking when you're off or on air, which I think will prevent a lot of embarrassing moments.

On the rear of the device you get a standard USB jack to connect this unit to a PC, PS4 or Mac (you can achieve this by hooking in the braided three-metre cable included). There's also a 3.5mm headphone jack secreted back there which will allow you to hook in some cans for the purposes of hearing yourself talk. Upon testing this port with passthrough PC audio I found the output to be 1:1.

That said, I would have liked a bit more clearance in the port area on the back. A headphone cable and the USB plug tend to get wedged in a little too closely against the included stand adapter. Unfortunate past experiences have taught me this claustrophobic situation will likely produce excess cable bend and port degradation for any less-than-careful users.

In terms of polar patterns you're getting four options: stereo, omni-directional, bidirectional and cardioid. It's worth noting that if you're a streamer who makes up the main demographic of this product, that's kind of overkill – all you'll ever really need is cardioid. Next on the specs list is a bit-depth of 16 and a thoroughly decent 48kHz sample rate. Frequency response is also OK being in the range of 20Hz–20Khz and you're getting decent sensitivity of -36 decibels. Basically, all of these specs are what I'd expect from a mic at this price range. Aside from the excess polar patterns there's nothing that stands out as exceptional nor under par. 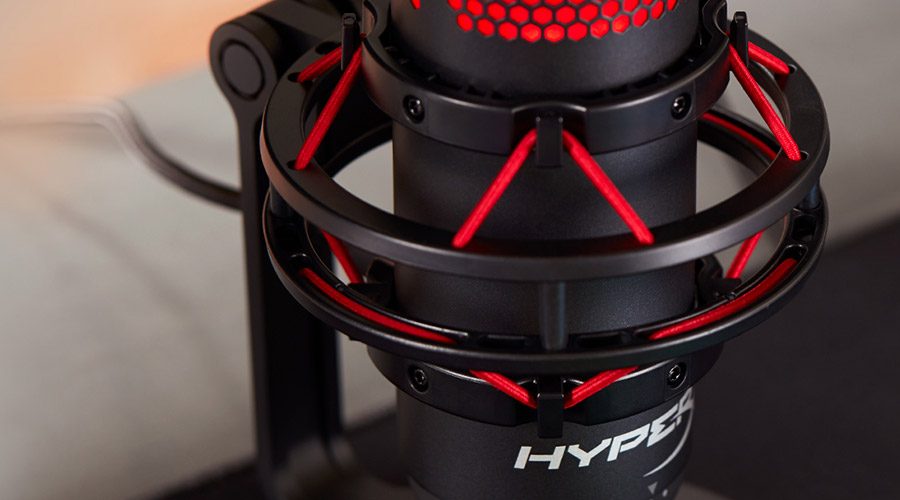 What is out of the ordinary is the inclusion of that anti-vibration shock mount. At the time of writing you'll not see another mic in this price range that will bundle it in standard and it's a very useful thing to have (more on this in a bit).

For starters, I found the QuadCast does a decent job of rejecting basic background noise. Part of that can be attributed to the internal pop filter and the anti-shock mount served admirably in its role, too. The latter reduced a great deal of incidental noise when I had the unit sat on a desk in front of me while I clicked my way on a mechanical keyboard (and made deliberate yet half-hearted attempts to bump the table with my elbows).

While the capture quality we're getting here wouldn't make me recommend this for slumming musicians, the QuadCast can handle any spoken-word scenarios with absolute aplomb. Yes, capturing at 48kHz at 16-bit is technically weaker than the 24-bit offered by the close rival that is the Samson G-Track Pro, but you'd need quite the ear to discern the difference. 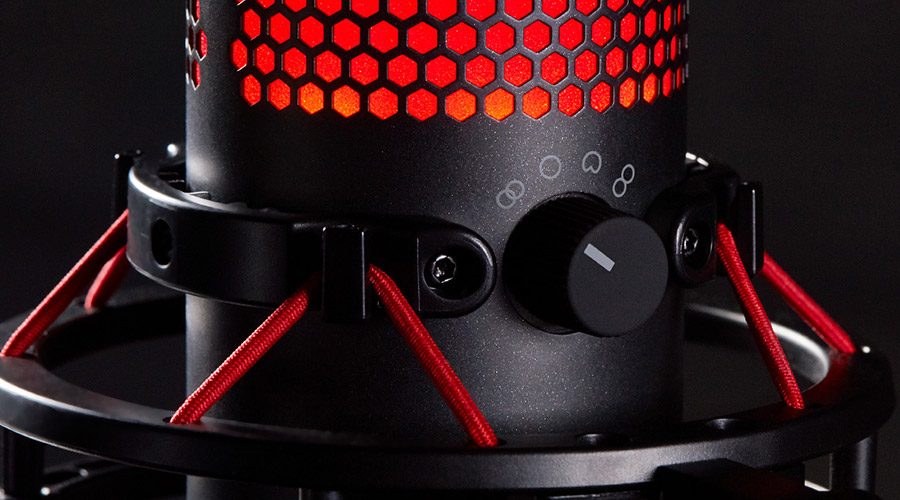 The QuadCast also wins points for being simple to set up on desktops and PS4. Being a plug-and-play microphone that relies on no software means Windows 10 will immediately play nice with it. With very little options tweaking I was able to capture full, warm-sounding results in my spoken-word tests. The low-end responsiveness subtly draws out any bass you may have in your vocal chords, and your mids are kept nice and crisp. All that being said, you ought to look into a pop filter purchase as the included pop filter reduces but doesn't fully eliminate plosives.

The HyperX QuadCast is an impressive first effort for a hardware manufacturer known for exceptional build quality and price-competitive features. This is a stylishly designed mic that will deliver the goods for newbie streamers and veterans alike. 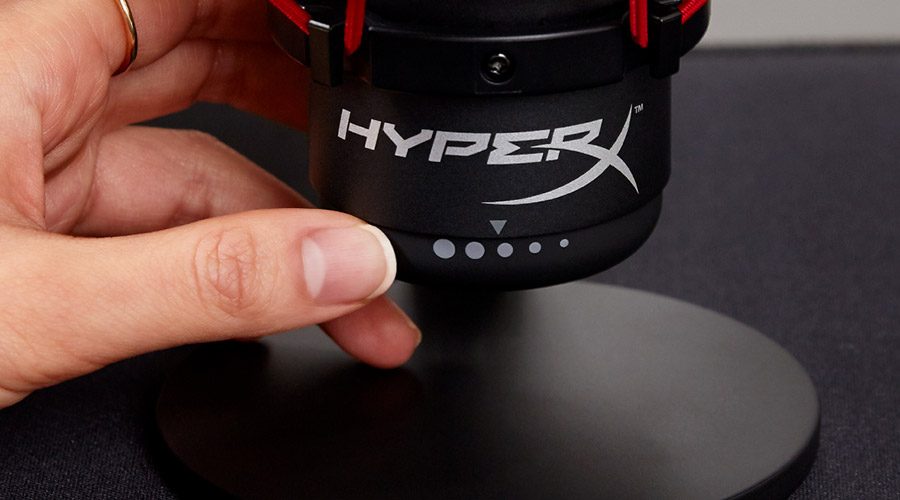 The HyperX QuadCast retails for $219 and is available from JB Hi-Fi, Amazon, EB Games, mwave and other computer retailers.Buy at Amazon