The honeycomb future is here. More and more PC peripheral manufacturers are embracing hexagons to produce ultralight gaming mice that often weigh less than half of their full-fat brethren.

Latest to join the honeycomb ranks is HyperX with the release of the HyperX Pulsefire Haste wired gaming mouse. It's the company's first ultralight gaming mouse, but as we saw with the Roccat Burst Pro, experience isn't a prerequisite to producing an excellent product. Can the Pulsefire Haste achieve similar success? Let's take a look. 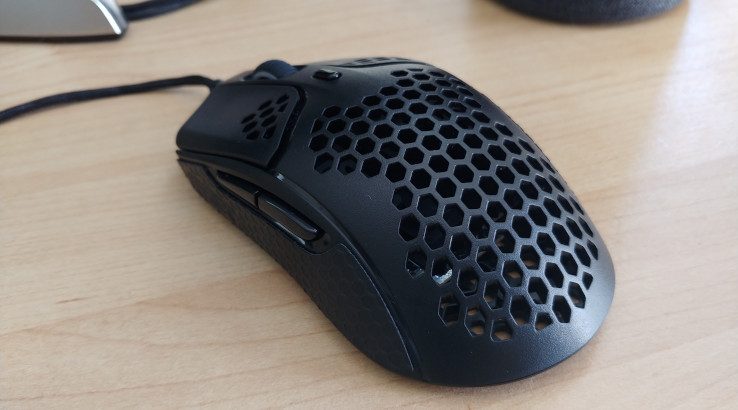 The Pulsefire Haste follows the same design playbook as most honeycomb mice. Hexagonal holes cover the top and underside of its plain black shell, even spreading to the bottom of its primary left and right buttons. It's a look that won't appeal to everyone – I personally prefer the sleeker aesthetic of a fully-enclosed shell – but it's consistent with the competition.

The benefit of all those hex-shaped holes is a significant reduction in overall weight, slimming the Pulsefire Haste down to a mere 59g. That's tremendously light, to the point that it almost feels hollow when you pick it up. It doesn't feel flimsy though, thanks to its sturdy plastic shell that firmly resists tight, white-knuckled grips.

Though the Pulsefire Haste features a leftie-friendly symmetrical design, it takes the typical approach of only including thumb buttons on the left side. So while it's technically ambidextrous, left-handed gamers essentially have to write off the thumb buttons unless they're comfortable clawing their ring and pinkie fingers.

Each side of the Pulsefire Haste is curved only slightly inwards. It's comfortable enough, but the straighter profile doesn't offer quite as much support or control as a deeper hourglass shape.

Like the Logitech G Pro X Superlight, the HyperX Pulsefire Haste features no textured surfaces on its plastic shell. Instead, it includes pre-cut grip tape in the box for the sides, left and right mouse buttons and thumb buttons. This tape significantly increases stability and control, and I recommend at least applying it to the sides of the mouse. That said, if you prefer the cooler, smoother feel of naked plastic, you can just leave the tape in the box. That's the benefit of the DIY solution, even if it isn't as sleek or seamless as incorporating the grip into the shell itself.

On the input front, the left and right mouse buttons are slightly concave instead of sitting flush with the rest of the shell. This helps keep your fingers centred on both buttons for optimal clicking.

Though slim, the thumb buttons are large enough to reach and hit with minimal effort. The scroll wheel, meanwhile, is noticeably thinner than most. This isn't bad, per se, but I personally prefer wider wheels as they're easier to grip and are more comfortable to rest your fingers on. The wheel's rubber surface is nice and grippy though.

A smooth, unobtrusive USB cable is critical for an ultralight mouse, so it's fortunate that HyperX has equipped the Pulsefire Haste with one of its proprietary, low-friction HyperFlex cables. Much like Razer's SpeedFlex cable, the custom material is soft and flexible, draping around objects and edges without getting caught or adding resistance to your mouse movements.

Since it's a gaming mouse, it's no surprise that the Pulsefire Haste includes RGB lighting. HyperX has taken a more reserved approach than most, with just two LED strips on either side of the scroll wheel. 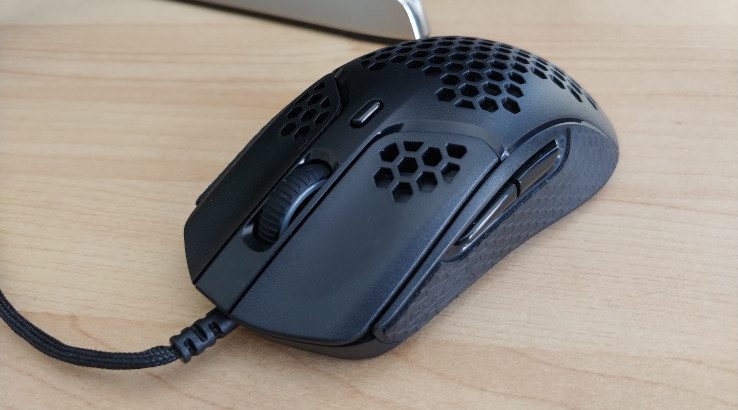 Whipping the Pulsefire Haste across your mousepad is a breeze thanks to its featherweight frame. Snapping a quick 180 in DOOM Eternal requires minimal effort, as does selecting and directing troops across the map in Age of Empires III: Definitive Edition. This is aided in no small part by the slick PTFE feet on the underside of the mouse. Not only did they glide smoothly over my mousepad, but over rough surfaces like tables and benches, too.

Of course, swift mouse movements require a keen sensor to keep up with them. Fortunately, the Pixart 3335 optical sensor within the Pulsefire Haste is up to the task. It delivered flawless tracking performance throughout my testing, enabling precision headshots in games like Destiny 2 and Gunfire Reborn as well as pinpoint accuracy on weak points in DOOM Eternal.

The Pulsefire Haste backs ups its top-notch tracking with excellent click performance. Under the hood lie TTC Golden micro dustproof switches, and they respond swiftly and firmly to each click. Feedback is precise and unambiguous, yet resistance is low enough to allow for rapid clicking when the occasion calls for it. The switches feel strong enough to take plenty of hammering too, with HyperX rating them for a lifespan of 60 million clicks.

The one area where performance flags is the scroll wheel. Clicking it down requires pushing through stiff resistance, yet the feedback from each click is weak and mushy. Scrolling is a bit muddy, too, with the feedback accompanying each tick of the wheel a little softer than I'd like. 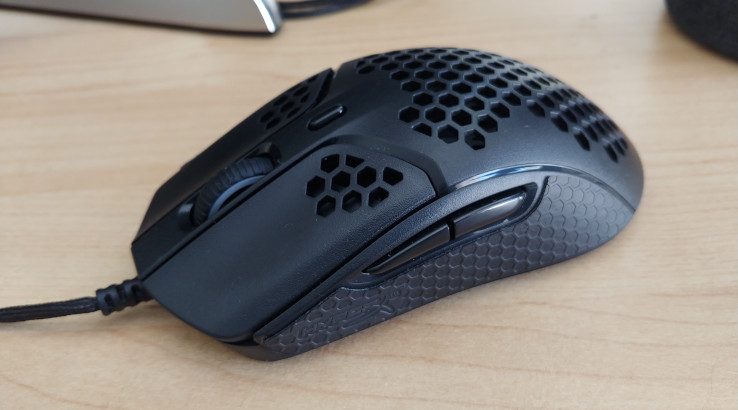 While not as feature-rich as some of its competitors, the Pulsefire Haste has a handful of configuration options managed through the HyperX Ngenuity desktop app.

Let's start with button remapping. HyperX claims that the Pulsefire Haste has six programmable buttons, but this feels like a bit of a stretch. Two of those buttons – the left and right primary buttons – can only be mapped to either the left or right click. The thumb buttons, scroll wheel click and dedicated DPI button, meanwhile, support mapping to other mouse buttons, keyboard keys, multimedia functions, system functions and custom macros. Mapping is handled through a simple interface where you select the button from a picture of the mouse and assign a function from a list.

The Pulsefire Haste's optical sensor supports a sensitivity range from 200 DPI up to 16,000 DPI, with the ability to define five distinct DPI tiers. Cycling between these on the fly is as simple as hitting the dedicated DPI button beneath the scroll wheel.

RGB customisation is relatively basic. You can choose from just a few lighting effects: solid colour, cycling, breathing pulse or triggered fade. None offer much in the way of further customisation.

Beyond that, you can tweak the polling rate of the optical sensor up to its maximum of 1000Hz and change the RGB brightness. The mouse does include on-board memory, but it can only store a single profile at a time. All told, it's pretty barebones.

It is worth mentioning that the Pulsefire Haste is compatible with Xbox One and PS4 in addition to PC, in case you're looking for a mouse with cross-platform support.

Should you buy the HyperX Pulsefire Haste?

As HyperX's first ultralight gaming mouse, the Pulsefire Haste is a winner. It skates swiftly and smoothly with minimal physical effort, its tracking accuracy is top-notch and it's built sturdy enough to handle plenty of heavy use.

There's certainly room for improvement – scroll wheel feedback could be firmer and software customisation could be deeper – but the HyperX Pulsefire Haste is an excellent addition to the ultralight gaming mouse space. 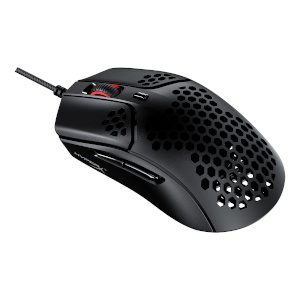 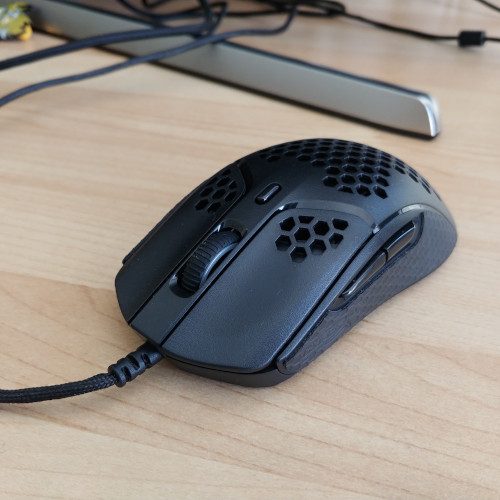