Welcome to the game that sounds like it features Tron Light Cycles – and probably an ADHD-suffering, Vin Diesel-esque hero who gets heinously sideways on them – but totally doesn't. Actually we'd crowd-fund the crap out of something like that, but Hyper Light Drifter is in fact a 2D Action RPG in the vein of the best 8-bit and 16-bit classics. Needless to say, it managed to kickstart my heart in other ways.

So, what is a drifter? If you're picturing a scruffy, chain-smoking hitchhiker angry at the local sheriff for running him out of town, you'd be wrong. They're the collectors of forgotten knowledge, lost technologies and broken histories in the lands of Buried Time. You'll need to throw on the why-does-it-have-to-be-pink cape of an especially unwell drifter who hacks up multi-coloured vomit while desperately searching for a cure. Fittingly, it will be a quest which will require some very ill skills on your behalf.

HLD is easy to pick up, but brutally difficult to master. If you've not got the dexterity of a ninja robot, nor the stick-to-itveness and pattern-memorisation skills of an OCD Dark Souls player, well, you're probably going to have a bad time. To have any hope of surviving as a futuristic swordsman, you'll need to learn techniques like hitting the dash button at the correct time to multiply it more or less infinitely. Likewise, your simple one-button combos can also be augmented with extra presses to initiate cleaves (one shots kill most minions) and lunge hits that causes a stun to give you breathing room. Throw in the ability to return enemy bullets with yet another savvy button press, and you've got pleasing brawls that feel like one part The Legend of Zelda, and another part Jedi Power Battles. 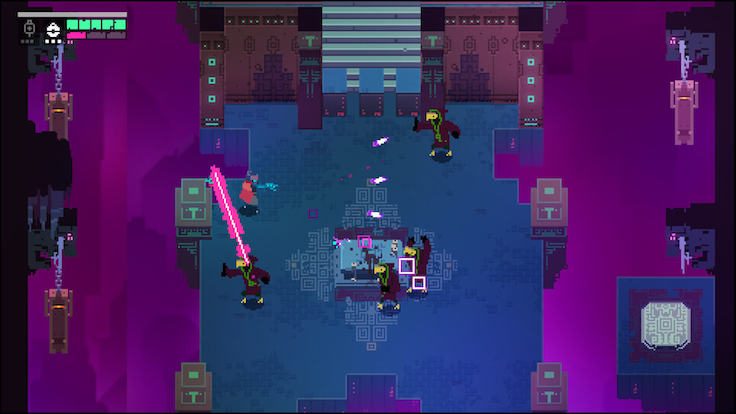 Death manifests as either jack-in-the-box turrets that pop out of the beautiful pixelart scenery, or it charges through en masse in large mob hordes. Thwarting the latter from afar, with a controllable Metroid-like bomb, is preferable. The alternative: wading in with your sword and trying to teleport dash around tight arenas set over bottomless chasms (with no guard railings to save you), This will either result in death, or the lucky-as-heck discovery of some invisible platform that leads to HLD's many secret areas. When all else fails, issuing gunishment with ranged weapons, preferably with the meaty triple-spread shotgun, makes for an entertaining bullet ballet.

The endorphin rush was real. That's a rare thing, folks.

You're going to need every offensive option you can get your hands on, too, because this features some of the most memorable and crushing boss battles this side of a FromSoftware game. You've already guessed the deal; overlarge entities chock full of vitality, seeking to kill you with elaborate, yet predictable phased assaults. What makes things difficult is the frailty of your drifter, something that creates a fair bit of trial and error. Whenever I beat one of these behemoths, the endorphin rush was real. That's a rare thing, folks. There are also a great many pleasant feels to be had outside of combat. HLD has a sit button, and for very good reason; the neon vistas, that stretch out into the infinite below you, are often achingly beautiful. You'll spend plenty of time studying this world, too, as you look for subtle pixel-art cues on how to progress – a light, a skeleton from ages past – anything to indicate a path. This is a game that seems to always hand you many branching exits, a few Castlevania-style item barriers, but no blatant signposts. When everything looks this gorgeous, a little backtracking is a pleasure (and frequently lucrative). When the roughly seven hour runtime is up, Hyper Light Drifter's vague-yet-satisfying ending will no doubt lure you back into its NewGame+, thanks to unanswered questions and a lust for secret areas. That's what I did immediately after the credits, at least. Mostly due to an admiration of its superb craftsmanship, but there was also a bit of Stockholm syndrome, too.

Hyper Light Drifter represents style and substance in equal measure. This has got just the right balance of frustration and fairness to bait you in and lock you away for good. In short, it's the most beautiful and pleasingly player-abusive experience I've had since exiting Dark Souls III's transitory lands of Lothric.

We reviewed Hyper Light Drifter on PlayStation 4 with a copy provided by the publisher. 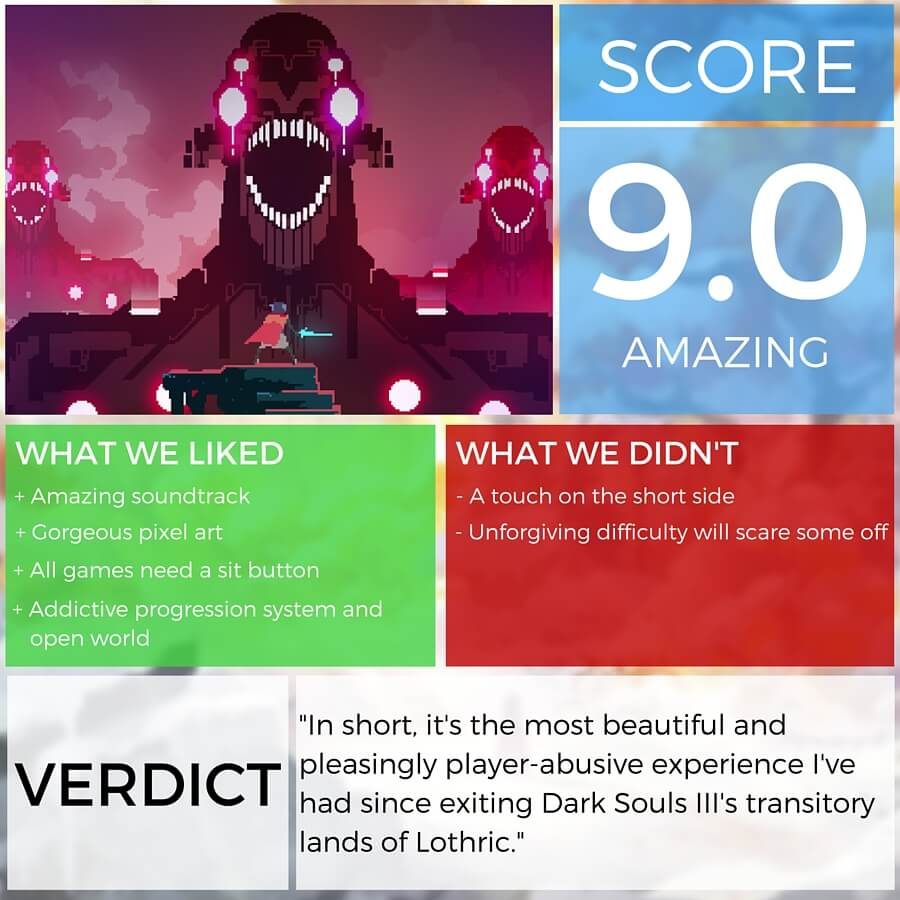 I Am Setsuna Review: “A lovingly-crafted callback worth answering” Abzû review: Therapeutic and beautiful