The Huawei Watch GT has astonishing battery life and a good suite of applications, but it's limited in its overall app store and is somewhat tricky to "buy" in Australia.

Quick Verdict
The Huawei Watch GT covers the basics of notifications and fitness tracking well and has a battery life that leaves other smartwatches seriously wanting. However, the lack of app integration, especially for music, is problematic.

Pricing accurate as of 24th January 2022

Smartwatches aren't a new concept, but for years they've had the same essential problem.

Folks who want to wear watches largely do so for the style and then the convenience of a timepiece, because in the smartphone age, the actual time is only as far away as your pocket or purse.

Smartwatches are meant to be more than simple timepieces, but to date, they've largely only tackled notifications and fitness tracking because the limitations of small screens and batteries have limited their ability to expand further.

The Huawei Watch GT nails the essentials of a smartwatch, but it's struck with its own limitations that make me ponder if I can properly consider it a "smartwatch" at all. It may just be a smart fitness tracker in a watch shape. Which isn't to say that it doesn't have a level of appeal. 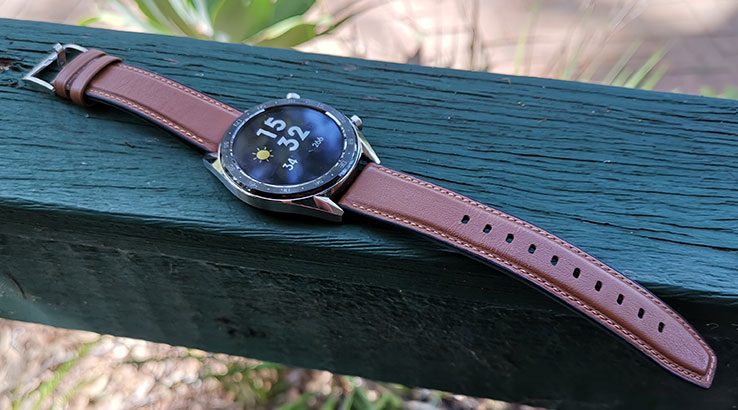 Huawei's last smartwatch to surface in Australia, the Huawei Watch 2, was an Android Wear watch with integrated 4G connectivity and a style that was largely geared towards folks who liked digital watches.

The Huawei Watch GT has a generously sized 1.39-inch 454x454 pixel display, larger than most competing smartwatches. There are two dedicated side buttons, with the upper button giving general menu access while the lower button launches the Huawei Watch GT's fitness application specifically.

At 46.5x46.5x10.6mm, it's a rather large smartwatch, and there isn't a smaller option if that's more your style. I have relatively thin wrists, but I never felt it was an overwhelming presence on my arm in the way that some classic watches can be.

That large display gives Huawei plenty of space for notifications, but what it doesn't give you is a whole heaping set of watch-face choices. It's similar to the problem with the Apple Watch Series 4 because it's Huawei's way or no way at all. Actually, it's a little worse because at least the limited quantity of Apple Watch faces allow for "complication" choices, so you can select what onscreen elements you want. You get no such luxury with the Huawei Watch GT, although to be fair, during the review period an update did add a couple of new faces to choose from. 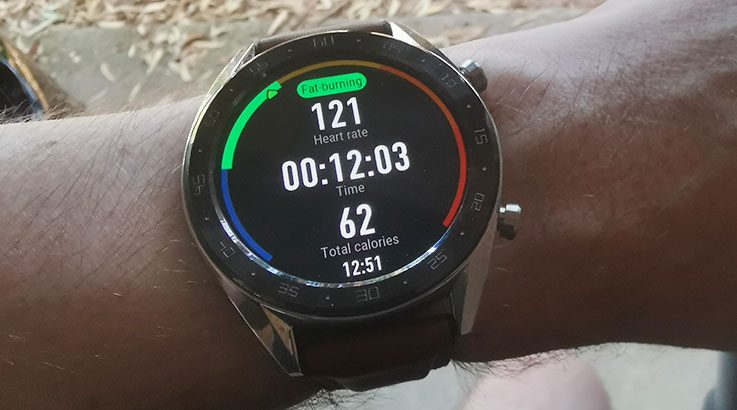 The Huawei Watch GT pairs over Bluetooth via the Huawei Health app. You don't require a Huawei phone to install the app, although if you do have a Huawei phone, it's probably already present. I tested largely with a Huawei Mate 20 Pro for review purposes. Huawei's Health app is acceptable but not really that exciting, and I honestly didn't use it much beyond that initial pairing session. If you wanted to really confuse folks, it'll even work with iOS devices as long as you're using iOS 9 or later.

Huawei has been coy about the underlying processor in the Huawei Watch GT, simply noting that it has 16MB of onboard storage and just 128MB of memory. That's because unlike the Huawei Watch 2, this isn't an Android Wear device, and that's a very important consideration. It's running bespoke Huawei software, and that means that there's currently no "app store" for this particular watch. It covers the essential basics, including notifications that you can switch on or off on a per-app basis, fitness tracking including heart-rate and sleep tracking and basic features such as weather, compass, flashlight and alarms.

One notable omission in that list is any form of music playback. You can take the Huawei Watch GT out for a run, but you'll need some other kind of device if you want tunes to run along to because there's no current support for loading music onto the Huawei Watch GT.

You couldn't even install, say, Spotify onto the Huawei Watch GT because there's no app store either. That puts the Huawei Watch GT more into competition with watch-style fitness trackers than "true" smartwatches, although Huawei could presumably launch that kind of feature, presuming the underlying OS supports it and they could get developers on board. Still, given it's been out a few months now, the odds of that seem low, and you certainly shouldn't count on it.

Actual performance is quite decent for those essential smartwatch functions. Notifications are clear and can be quite lengthy, although again the lack of apps means that they're all pointers to your phone's screen at some point. Fitness tracking and GPS work well, as does heart-rate tracking. I can't stand wearing a full watch like this to bed, so I can't comment on the quality of its sleep tracking, however. 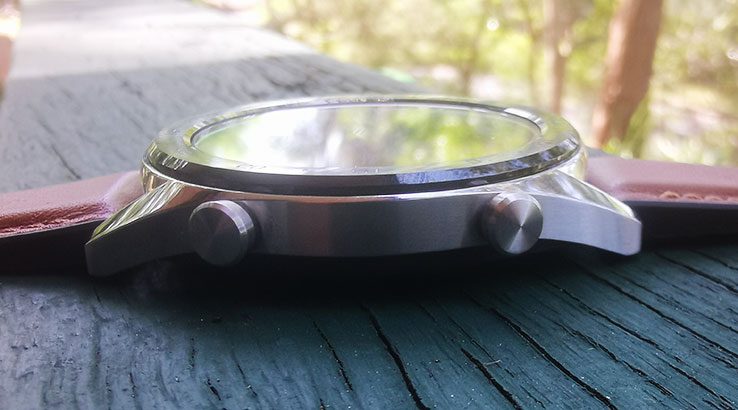 Astonishingly, they're not lying about that battery life. Indeed, you might make it through even more time than that, although the reasons why become clear pretty quickly when you start using the Huawei Watch GT.

Where other smartwatches use "always-on" style displays so you can check the time at ease, the Huawei Watch GT requires a button tap to bring the display to light, and it quickly dims again unless you're actively using it. The underlying software is incredibly aggressive when it comes to switching the display off, and the end result is a battery that just seems to keep on going. I've been testing it for a couple of weeks and can confirm that 14 days of battery life is entirely achievable.

Charging is via a custom magnetic charging clip that plugs into a standard USB-A type socket. It works well enough, but as always you'd want to be careful not to lose it. The longer battery endurance of the Huawei Watch GT would keep you going longer than most phones, but it's a pity that Huawei couldn't find a way to charge it via common USB-C. 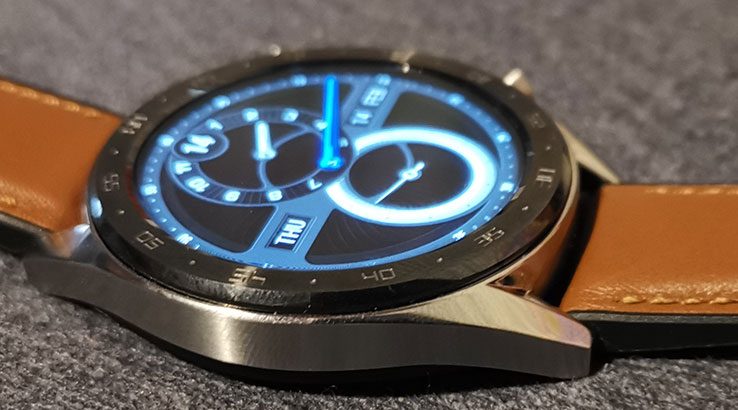 More than most, the Huawei Watch GT has had me wondering what smartwatches are actually for.

If you're in the camp that says that they're mini-computers that replace key functions of your smartphone with lots of flexibility, you're likely to find the Huawei Watch GT limiting and frustrating.

If, on the other hand, you figure that they're best when used for base fitness tracking and notifications, it's an ideal wrist companion. The lack of music support is troubling, but beyond that the reality in the smartwatch space is that we really have yet to see that true "killer app" that makes a smartwatch a must-buy prospect, rather than a nice-to-have companion device. The Huawei Watch GT fulfils the basics very well, and it does so with a battery life that leaves every other smartwatch wanting.

Except that without apps support, it might not be a "smartwatch" at all.

Officially speaking, you can't "buy" the Huawei Watch GT in Australia at all. Which makes it rather mystifying that Huawei states that it has an RRP of $399 because that would indicate that you could in fact officially buy it.

That's a great deal any way you look at it. Right now, the Huawei Mate 20 Pro is topping the charts of our best mobile phones list, and you can score one on contract with Vodafone pretty easily.

So, you can't buy one outright in Australia.

Huawei announced the Huawei Watch GT at the launch of the Huawei Mate 20 series, and it's been on sale in other markets worldwide for a little while now.

That means that it's available on eBay pretty easily, so if you were keen on its exceptional battery life, you could buy one as a standalone device.

Battery life
Up to 14 days