Quick verdict: The HUAWEI WATCH FIT straddles the line between a fitness tracker and a true smartwatch with good battery life.

The HUAWEI WATCH FIT is very much a half-and-half device; it's mostly a simple fitness tracker with just a few of the trappings of a true smartwatch. It's nicely equipped with a variety of health monitoring and fitness modes, and if you were coming to fitness tracking and smartwatches for the first time, it's going to be a good choice, but those already in the Fitbit camps or enamoured of more fully-featured smartwatches aren't likely to be convinced to switch over to Huawei. 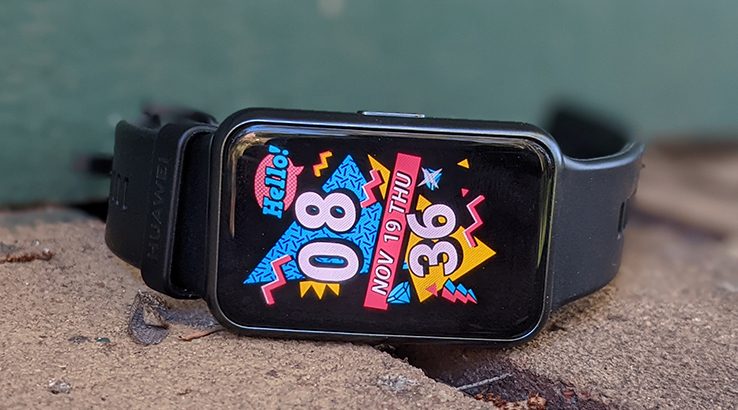 The HUAWEI WATCH FIT has a design that could be said to be derivative of square smartwatch designs like the Apple Watch Series 6 – if you were to take those watches and pound them from both sides with sledgehammers. It features an elongated rectangular 1.64-inch AMOLED display, and while that might sound large in smartwatch-size terms, bear in mind that this is always a diagonal measurement. The HUAWEI WATCH FIT is certainly tall, but it means that its user interface has to live within a column style interface.

At a design level, that does help the HUAWEI WATCH FIT remain relatively inconspicuous, looking more like a slightly jazzed up fitness band than a smartwatch. In Australia, Huawei sells the HUAWEI WATCH FIT in Mint Green, Sakura Pink or Graphite Black finishes, and it's the latter that I've been testing out over the past few weeks.

Controls are limited to touchscreen swipes and taps as well as a single side button that brings up a scrolling menu of mostly fitness app choices. It's a simple system for sure, but it works quite well in that gap space between a "full" smartwatch and a simple fitness tracker.

The band on the HUAWEI WATCH FIT is a simple silicone strap that matches your WATCH FIT colour choice. It's nothing fancy at all, and while there are release points for replacement, Huawei doesn't have any plans at this stage to release alternate strap styles or colours for the HUAWEI WATCH FIT in Australia. 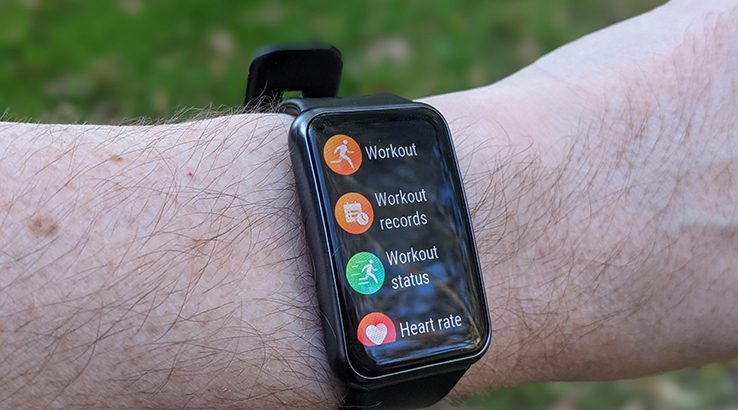 All of the fitness tracking activities present in the HUAWEI WATCH FIT work through the Huawei Health app, which you'll need to install if you're not running a HUAWEI WATCH. It's available for both iOS and Android, but like so many fitness app products, it's a closed silo of your fitness data; if you want to move to other Huawei wearables, your data can travel with you, but less so if you're switching from another fitness tracker product or want to shift away from Huawei at some future date. While this isn't unique to Huawei, isn't it long past time we had some kind of open, consumer-friendly standard in play?

Like Huawei's other wearables, the operating system you're looking at with the HUAWEI WATCH FIT is Huawei's own LiteOS. I've long had the issue with LiteOS that it's also a closed shop in terms of additional apps that you can add or services that you can control through the company's wearable devices. If you view the HUAWEI WATCH FIT as a slightly-smarter fitness band that's not such a big deal, but if you're looking for the kinds of app integration you get through Wear OS or watchOS, you simply won't find them here.

That's not to say that the HUAWEI WATCH FIT is exactly lacking in direct apps, especially for fitness routines. Indeed, it's awash with all the fitness routines you'd nominally expect from a fitness band these days, split between specific fitness and running courses and more direct activity types. The range on offer is very wide, covering obvious types such as running, cycling and swimming and more esoteric fare such as belly dancing and darts. Really – it has a darts mode, although all this does is track your heart rate, time and calories burned, rather than seemingly using any complex accelerometer-based measurements of your arm swing motion. Maybe Huawei's saving that for the HUAWEI WATCH FIT 2?

The HUAWEI WATCH FIT is also capable of tracking sleep as long as you're happy to wear a watch to bed. Its readings aren't exactly comprehensive on the watch itself, although it does pass more data through to the Huawei Health app over time.

Speaking of sensors, the HUAWEI WATCH FIT includes a reasonably accurate basic heart rate sensor as well as a blood oxygen sensor for more dedicated tracking purposes. Measuring your blood oxygen is a very slow process, and like the recently reviewed Apple Watch Series 6, I found I could get faster results with a dedicated and cheap finger sensor in any case.

The vertical display on the HUAWEI WATCH FIT works well for some fitness purposes and less so for other functions, such as notifications. If you get a lengthy message notification, you're stuck reading this long column of text, which is less than ideal especially if you're out and about. The longer face also affects how actual watch faces look, with a lot of the onscreen UI elements having a slightly squashed look to them. Huawei does provide a range of watch faces for the HUAWEI WATCH FIT, accessed through the Huawei Health app. 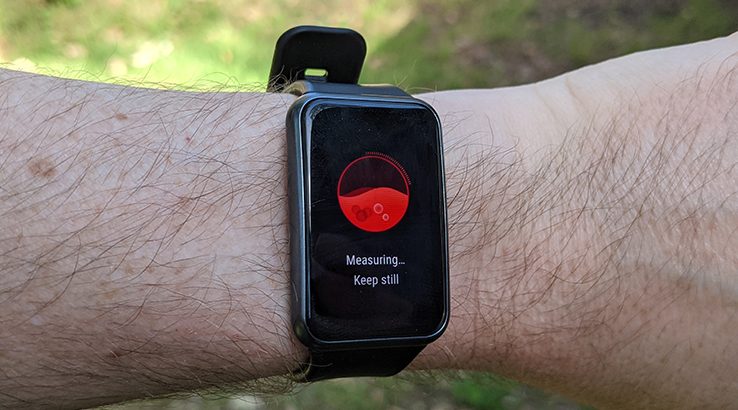 Huawei rates the HUAWEI WATCH FIT as being capable of up to 10 days of usage, although that presumes that you're not using the inbuilt GPS tracking all that extensively. Having tested the HUAWEI WATCH FIT over the past couple of weeks, it's a fairly accurate figure; I tended to go around six to seven days before it started to run particularly low. That's a very solid result for a device that straddles the line between a full smartwatch and a simpler fitness tracker.

When it does start to run out of charge, you've got to use the included magnetic charging thimble.

No, it's not a thimble, but that's what Huawei calls its custom charging cable. It can plug into any USB-A charger, although you'll have to supply that yourself. Recharging is reasonably rapid, but like so many small magnetic charging cables, it can be a bit fiddly to get it to properly line up with the underside of the HUAWEI WATCH FIT.

Should you buy the HUAWEI WATCH FIT?

Huawei's wearables that use LiteOS all share that same app limitation, and for the more expensive smartwatches, that always feels like a deal-breaker to me. They're well-engineered devices with good battery life, but they're just so limited as to be unusable.

By dint of its lower price and simpler ambitions, the HUAWEI WATCH FIT sidesteps most of those issues, presenting a good quality fitness tracking experience with a wide array of fitness goals to pursue within a single device. From $87.41 at Amazon Check availability at eBay