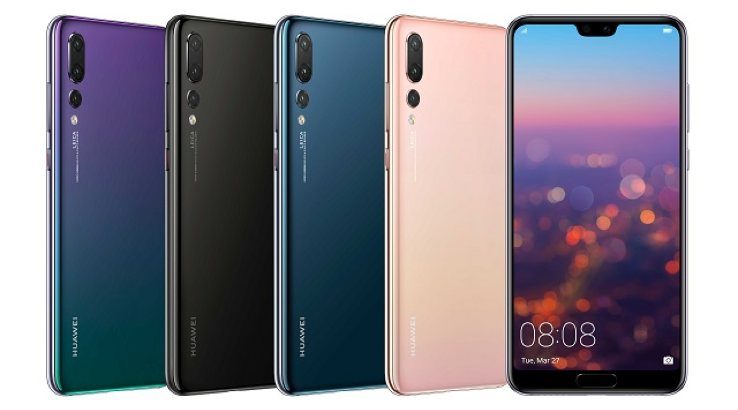 Huawei's new flagship smartphone has more rear cameras than any other, along with a rather familiar looking notch.

At its Paris launch overnight, Huawei has announced its new P20 series handsets, with camera technology and the integration of AI features to aid that, photography pitched as the key selling points.

As rumoured, the Huawei P20 Pro features three rear lenses, combining a 40MP RGB sensor, a 20MP monochrome sensor and an 8MP 3x optical zoom sensor. While you can take pictures directly with the 40MP sensor at full resolution if you so wish, the default for that sensor is to combine pixels for increased lower light sensitivity, taking 10MP photos with sensors that weigh in at 2µm each.

The 8MP optical zoom lens features optical image stabilisation, but the other two lenses skip out on that feature, instead using AI-based stabilisation techniques.

The regular Huawei P20 is a two-lens model, with a 12MP RGB and 20MP monochrome lens.

Both the P20 Pro and P20 include support for 960fps super slow motion, putting them in the same class as the Samsung Galaxy S9, Samsung Galaxy S9+ and Sony's Xperia XZ Premium. Sony's upcoming Xperia XZ2 will still have the slow motion edge with support for 1080p shooting where competitors, including the Huawei P20 family, only offer it at 720p resolution.

Around the front, both models feature a 24MP selfie camera with an AI-driven "beautification" mode, as well as 3D portrait lighting features. It's also at the front that you'll notice the similarity to a certain well-known phone brand.

That's because the Huawei P20 and Huawei P20 Pro both feature a "notch" based design, although their screen sizes are somewhat larger than Apple's iPhone X design. The Huawei P20 features a 5.8 inch 16:9 FHD LCD display, while the P20 Pro runs with an 6.1 inch 18:9 OLED display.

The frames of the new devices feature a new optical coating process that gives the rear of the casings a gradual hue that changes according to the light shining on it. Rather predictably, reports from the launch suggest that, like most shiny phone backs, they're rather good at picking up fingerprints rapidly.

All members of the Huawei P20 family skip out on headphone jacks entirely, although Huawei did launch its entries into the wireless audio space with its new Huawei FreeBuds and Huawei Active Noise Cancelling Earphones.

Speaking of pricing, while Huawei Australia has confirmed that Australia will be "among the first" markets to retail its new phones including the Porsche Design model, it didn't reveal local pricing or availability of the new handsets just yet.

Internationally, it's being reported that the P20 will sell for €649 from today, while the P20 Pro will arrive in some markets on 6 April for €899, and the PORSCHE DESIGN HUAWEI Mate RS will sell for a hefty €2,095 from 12 April.