The next generation of virtual reality lands June 2021 with the arrival of the HTC VIVE Pro 2. Here's everything you need to know. 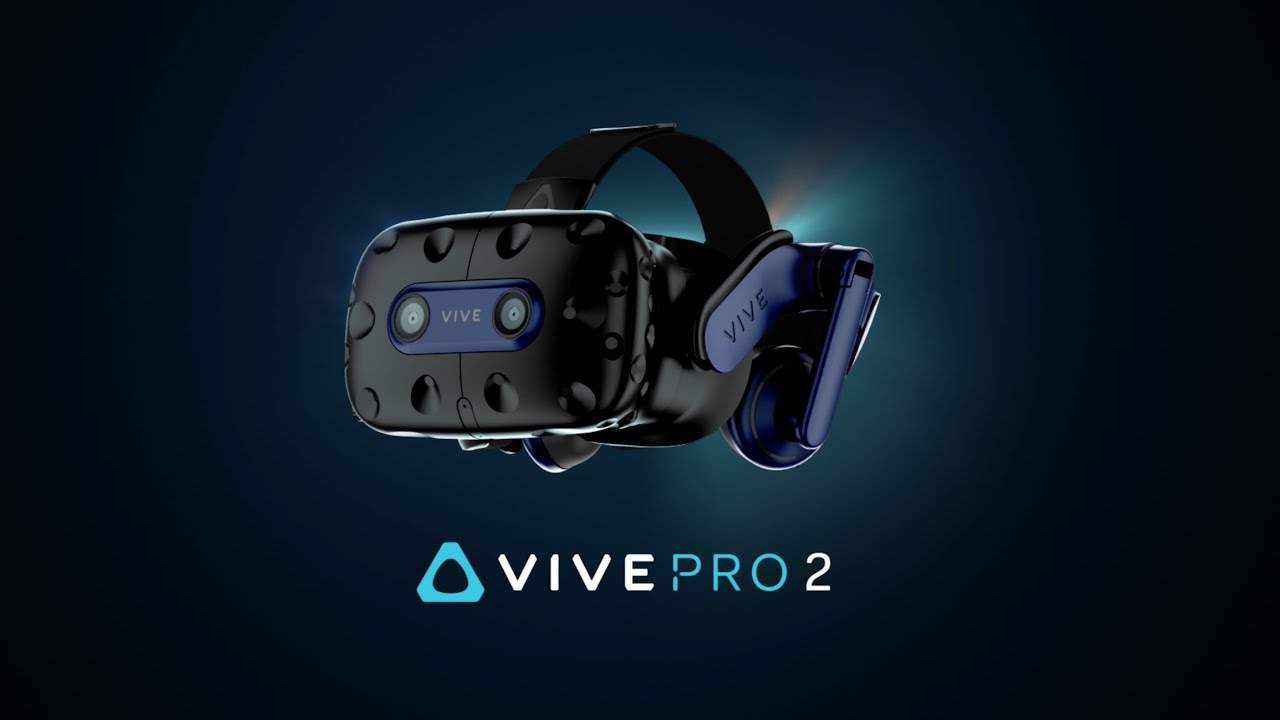 The HTC VIVE Pro 2 provides a significant step forward for gamers in the pursuit of ultimate VR immersion. The new headset was revealed, and became available for pre-order, on 12 May 2021. It was announced alongside the business-focused HTC VIVE Focus 3.

As its name would suggest, it's the first genuine sequel to the HTC VIVE Pro that released in April 2016. At the time it was a best-in-class headset, and on paper, its follow-up looks set to achieve the same result. It remains a wired headset at heart, although is compatible with the VIVE Wireless Kit for those who want to adapt it into an all-in-one solution.

Let's dive in and take a closer look at the HTC VIVE Pro 2, which is sure to stake a claim as the best VR headset in Australia. It will certainly beat PSVR 2 to market by a good year.

When is the HTC VIVE Pro 2 release date in Australia?

The HTC VIVE Pro 2 will be available in Australia from 4 June 2021. Pre-orders are open now.

How much does the HTC VIVE Pro 2 cost?

The HTC VIVE Pro 2 standalone headset will cost $1,299. During the pre-order period, you can sign up to the VIVE newsletter to receive an $80 discount and a two-month VIVE Infinity membership.

Alternatively, if you wait until August – a specific date is still TBC – you can buy the VIVE Pro 2 Kit for $2,199. This includes the Base Station 2.0 and the VIVE 2018 controllers alongside the headset itself. What's weird is that if you buy them individually through the VIVE website right now that kit would only cost $1,938, so we wonder if there is something else included we don't know about yet.

HTC is taking an interesting approach to the release of the HTC VIVE Pro 2. It's in many ways being pitched as an upgrade for existing customers as much as it is an entry point for those who have been waiting for the technology to get up to speed with their expectations. Hence the decision to sell just the headset at launch.

Note that all existing VIVE peripherals are compatible with the HTC VIVE Pro 2. They're all part of one big happy ecosystem. This includes the Facial Tracker, Base Stations, Wireless Adaptor, Wand controllers and more. 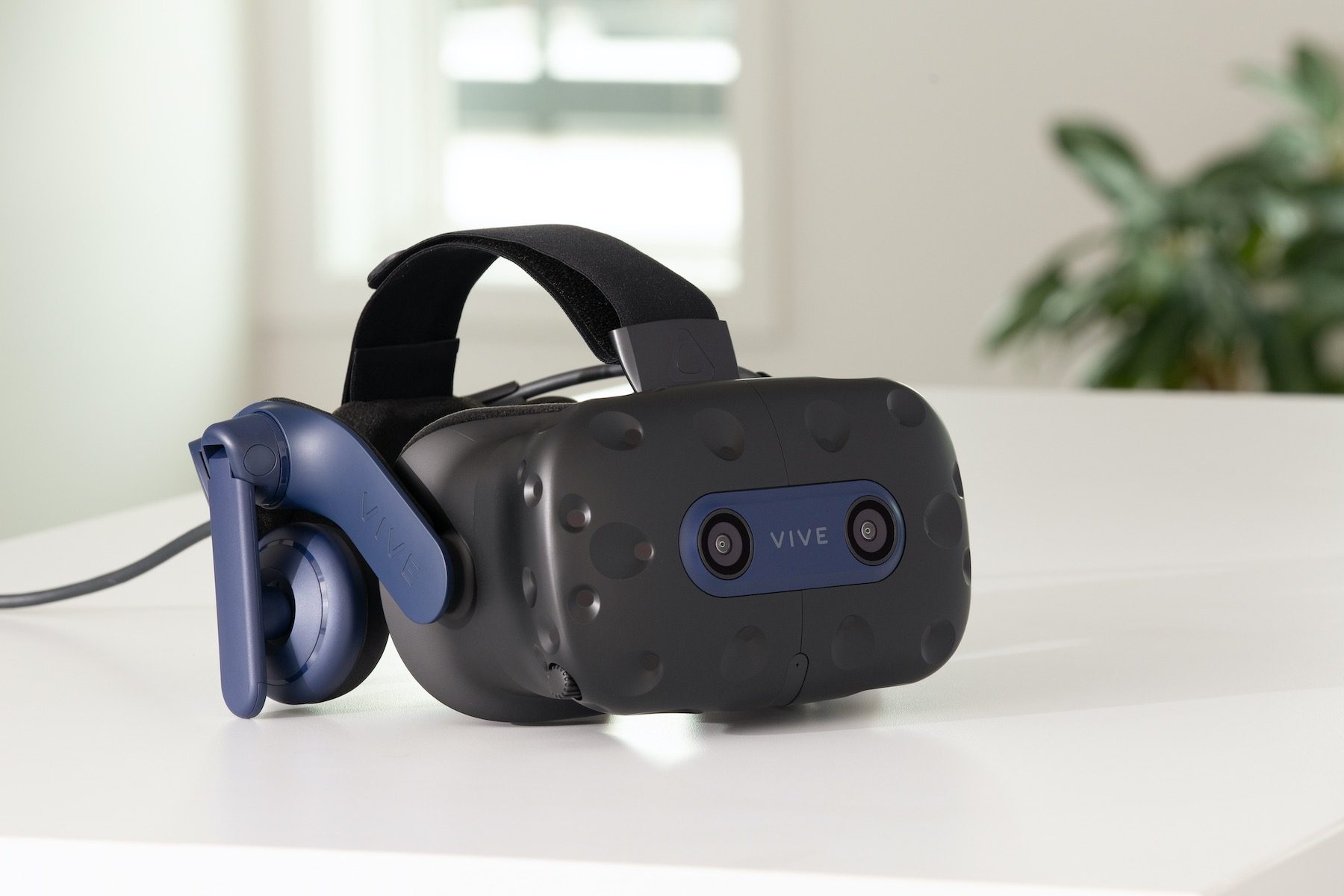 Where can you buy the HTC VIVE Pro 2?

During my conversation with Dexmier, he told me that the HTC VIVE Pro 2 will be sold through the same retail partners that were utilised with previous VIVE Pro models. However, he also indicated that conversations with additional retailers are at play, so hopefully we will get a wider distribution this time around.

At the time of writing, the HTC VIVE Pro 2 will offer the highest-end VR experience on the market, assuming you have a PC capable of meeting its performance demands. Here are the key features you can expect.

Much like the HTC VIVE Focus 3, the VIVE Pro 2 is scaling up the virtual reality resolution to 5K. Well, kind of. In truth you get a 2.5K image in each eye – or more precisely 2,448 x 2,448 pixels. Together you could – if you were in marketing – claim the overall 5K resolution, but it's a bit of a furphy.

Regardless, it's still the best resolution in the market. It's joined by a 120Hz refresh rate, which is a significant leap forward. Together, this is going to bring high-end VR games – and indeed business applications – to a level we haven't experienced before. The clarity will be stunning, especially alongside an improved 120-degree field-of-view.

All that visual goodness is delivered on fast-switch, real RGB sub-pixel LCD screens. The VIVE Pro 2 is also the first VR headset to utilise Display Stream Compression, which better handles the management of these bigger files between your PC and the headset.

The VIVE Pro 2 utilises an intriguing dual stacked-lens design to achieve its resolution and field-of-view in a way that hasn't drastically increased the size of the headset itself. Indeed, the overall look has barely evolved at all. The company hasn't provided comparative size and weight information to the original headset at this stage, so we anticipate little change in footprint.

Indeed, until we can get hands-on with the VIVE Pro 2, we can only go by the non-specific promises of HTC: that the weight is evenly distributed; that it can easily house glasses for those gamers who require them; that the headstrap dial can be fine-tuned painlessly via a dial, and so forth.

However, we can confirm that the VIVE Pro 2 is IPD (interpupilary distance) adjustable, so you can alter the gap between the eye displays over the bridge of your nose. 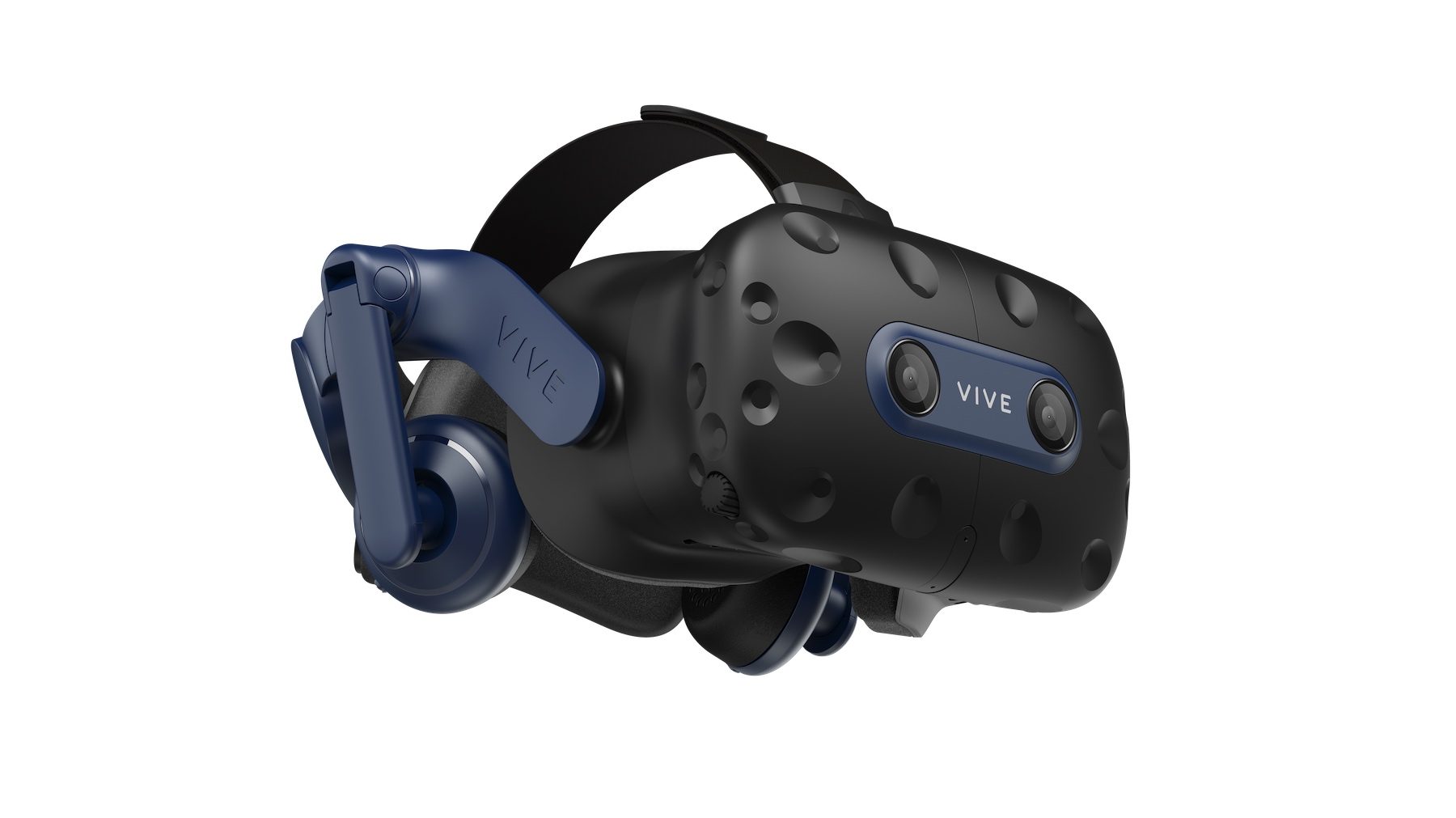 If there's one disappointment with the HTC VIVE Pro it's a continued reliance on Base Stations for tracking – especially given that the HTC VIVE Focus 3 has quad-camera tracking built into the headset itself.

The 3D spatial sound speakers that sit next to your ears are deliberately designed to not completely disconnect you from the real world. If a Dothraki horde charges your position in the middle of a Half-Life: Alyx session, you'll know it. There is an audio jack and the headset's audio is Hi-Res certified. As such, you can connect better gaming headsets should you desire.

The headset does feature a dual microphone, too.

The HTC VIVE Pro 2 isn't releasing with any new iteration to the controller set. Indeed, the most recent VIVE Pro controller from HTC – released back in 2018 – is the one you'll use with the new headset.

That controller remains solid at least. The eight-hour battery life, depending on what game you are playing, isn't amazing and is probably the biggest concern, especially considering the new controllers coming to the HTC VIVE Focus 3 claim a 15-hour battery life. Other notable features include:

Unfortunately, you cannot use the new HTC VIVE Focus 3 controllers – also launching in June – with the VIVE Pro 2. This is likely due to the different tracking systems.

Yes it is. It is not only compatible with the software available to download via the VIVEPORT app store, but also all the peripherals. This includes the Base Stations, Controllers, Trackers, Wireless Adaptor and anything in the SteamVR Tracking library.

Alongside the announcement, HTC stopped short of providing minimum PC specifications for the VIVE Pro 2, but you can expect the recommended specs to be high to very-high end. The company is targeting gamers and even businesses that want the very best in VR performance and that will come at a cost in PC hardware.

However, it's not all bad news in terms of minimum specs. The VIVE Pro 2 will support the 2010-era DisplayPort 1.2. Utilising a technology called Display Stream Compression – developed in conjunction with AMD and NVIDIA – the VIVE Pro 2 can better manage the demand on older rigs. HTC suggested to Finder that graphics cards as old as 2016's GTX 1090 will be able to run the VIVE Pro 2.

Whether you take a hit to the resolution and/or refresh rate in the process is what we'll need to test in our forthcoming review. 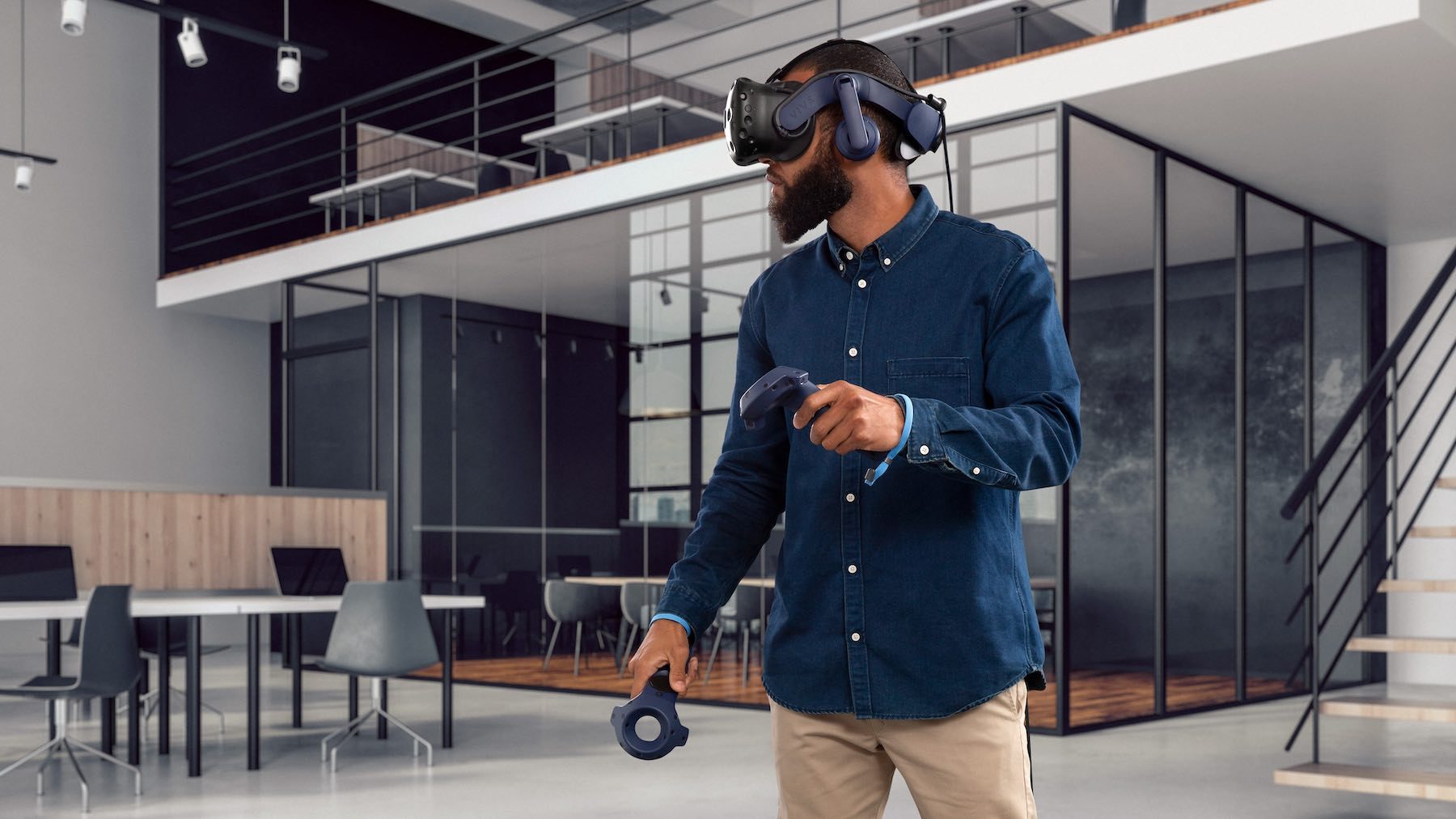