HP's updated Spectre Laptop has an eye-catching design and good overall performance, albeit at a predictably high price point.

Buy at Amazon
HP's Spectre line of 2-in-1s has a long heritage of delivering attractive business-centric laptops, and with just a few nips and tucks in the design department, along with some new innards, that's exactly what the latest model of the company's HP Spectre x360 13 delivers. In a market where there are a lot of copycat designs, the HP Spectre x360 13 certainly stands out. 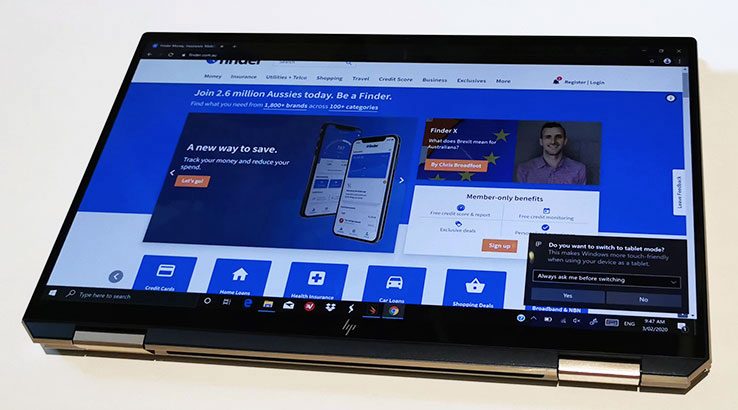 The biggest change for the newest model of the HP Spectre x360 13 is the way that the company's tweaked its design to make the angular parts of the laptop appear even more angular. Nowhere is this more evident than in the corners, where HP's taken the Stanley Knife to the top corners. They're wholly diagonal where on prior models you got a more traditional rectangular laptop look.

This isn't just slimming down for the sake of aesthetics entirely, either. The left top side is where HP places the HP Spectre x360 13's power button, while the top right houses a USB-C port that can be used for data or charging purposes. Just around the "corner" from that port is another USB-C port as well as a microSD reader and a physical switch for disabling the HP Spectre x360 13's inbuilt webcam if you're security-minded that way. 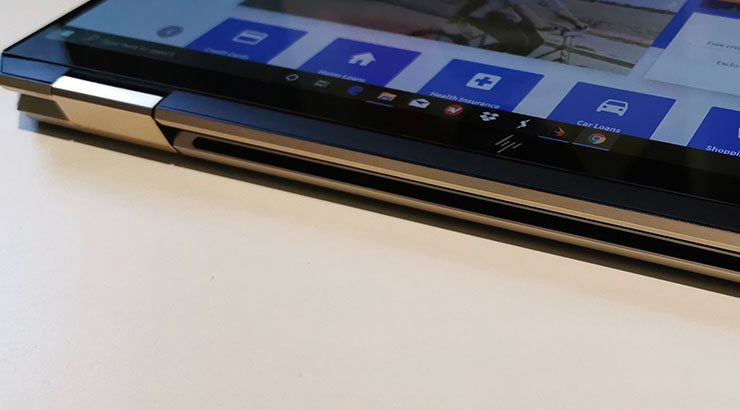 Speaking of security, the inbuilt camera works with Microsoft's Windows Hello system for login purposes, but there's also an onboard fingerprint sensor if that's your biometric authentication flavour of choice. It's located to the right of the touchpad, which is a configuration I find a lot easier to handle than those laptops that use the power button for the same purpose. Then again, given where HP puts the power button on the HP Spectre x360 13, it essentially didn't have a choice there.

On the left-hand side, there's a combination headphone/microphone jack as well as an expandable USB-A type port. While USB-C is fast taking over as the connection of choice, it's nice to see HP include older school flexibility for those times when you've got an older peripheral to hand.

HP sells the HP Spectre x360 13 in a variety of configurations when it comes to screen technology depending on how much you're willing to spend. 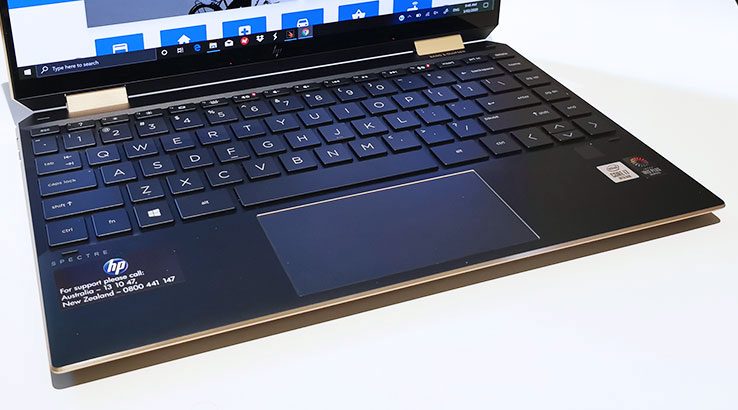 The review model supplied was the top-tier model with a 13-inch 4K OLED display, but it's also possible to buy a slightly cheaper model that drops to Full HD/IPS LCD if you don't want or need quite that much resolution. It's certainly nice if you're also using the HP Spectre x360 13 for more than just work tasks, though.

As with previous generations of the HP Spectre line, the HP Spectre x360 13 has a solid hinge that allows for full rotation of the screen, so you can quickly and quite securely flip it around to turn it into a tablet. However, at around 1.32kg, you'll certainly feel its weight if you're using its tablet mode for any considerable length of time. 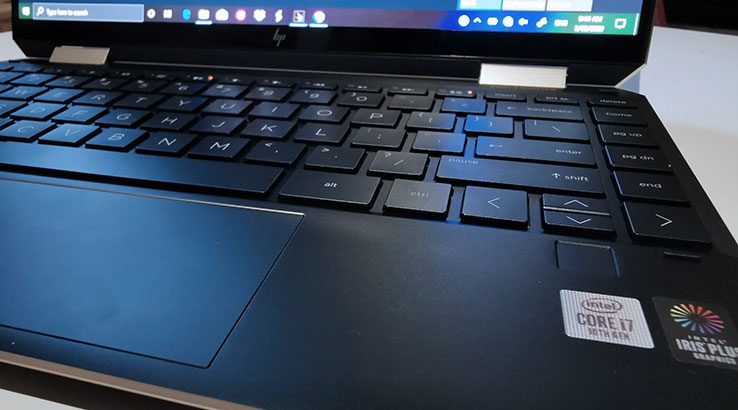 The model of the HP Spectre x360 13 provided for review ran on an Intel Core i7-1065G7 "Ice Lake" 1.3Ghz processor with 16GB RAM and 512GB of onboard storage. That's a fair but not spectacular recipe for performance at this price point, but then notebook refreshes typically just bump up in the exact way that HP has improved the internals for the HP Spectre x360 13.

As such, its benchmark performance sits in the space of being entirely acceptable for what is a business laptop. Pitting it against Microsoft's Surface family for example sees the HP narrowly beat out both the Surface Pro 7 running on the same processor and Surface Laptop 3 built around AMD's Ryzen 5 358 in PCMark 10:

That's a different level that's so slight that you probably wouldn't notice it in day-to-day usage, however. Where the HP Spectre x360 13 stumbles a little more is in graphics performance. It's using Intel's own Iris Plus graphics solution, and predictably it's not terribly powerful. Here's how it compared using 3DMark's Time Spy test:

It should be noted that 3DMark refused to verify that HP test result due to HP's own inbuilt driver. While you might reasonably conclude that this isn't pitched as a gaming laptop, if your business needs functions such as CAD or video editing, the HP may struggle to entirely deliver.

The other issue with the HP Spectre x360 13 when you push it hard is that heat dissipation kicks into full gear, mostly towards your lap. This isn't a unique problem for thin and light laptops, but I certainly noticed it when I was using it heavily.

The other aspect of using a laptop that's often overlooked is the keyboard. HP's design layout for the HP Spectre x360 13 is very good for a laptop of this size. While there's no number pad, HP has left reasonable space between each key, and there's a good-sized set of arrow keys for selection too. I tend to be pretty brutal to keys thanks to my typing speed, but the HP Spectre x360 13 didn't let me down for accuracy or noise. 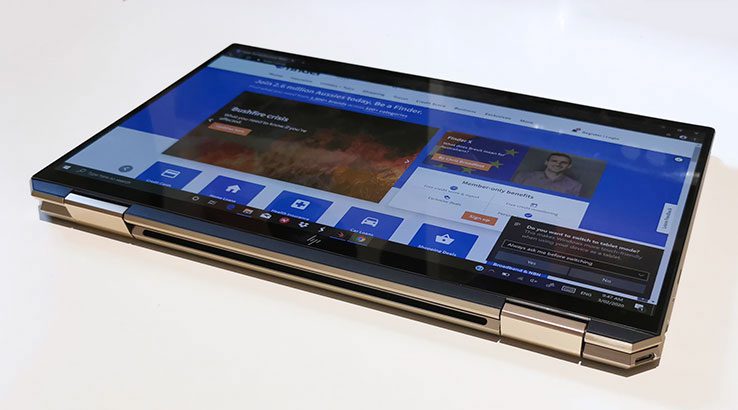 HP rates the HP Spectre x360 13 as being capable of up to 22 hours and 30 minutes of video playback, although that's a figure that it peppers with some significant qualifications. That's a test run, according to HP Australia's website at "using continuous HD video playback, 720p (1280x720) resolution, 150 nits brightness, system audio level at 50%, player audio level at 100% played from local storage, headphone attached, wireless off, auto dimming off." 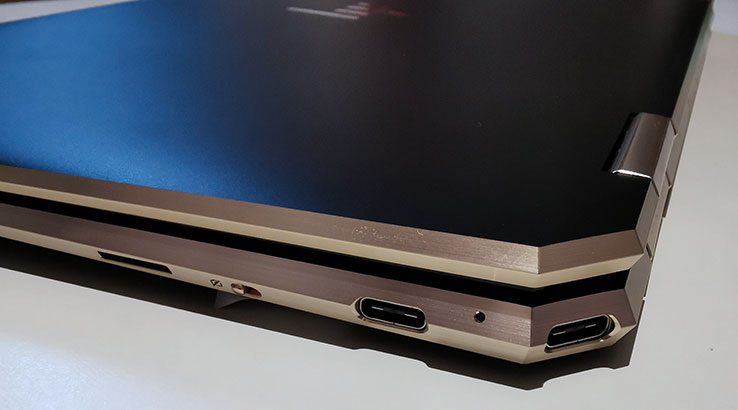 We tend to test with Full HD 1080p video at maximum brightness and with Wi-Fi enabled because we figure that it's pretty rare you'd drop your Wi-Fi connectivity just to play a video.

Doing that and looping a video at moderate volume through the HP Spectre x360 13's own speakers rather than through headphones, which would again hit the battery in a more robust fashion gave us a figure well below HP's claims:

So where does the truth lie? Somewhere in-between, really; our video test is designed to be a little brutal, and HP's is meant to show its shiny laptop in the best possible light.

Having used the HP Spectre x360 13 for work purposes on and off over a couple of weeks, I'm confident enough to say that for most purposes, it'll handle a full business day's work without too many issues. Long plane trips might be a worry if you wanted to watch a lot of videos, however, unless you pack the USB Charger and you're lucky enough to have working in-seat power.

How we score our reviews
The HP Spectre x360 13 is in some respects a specifications bump wrapped in a slightly modified design from previous years. There's nothing essentially wrong with that, and in this space, there are a lot of designs that tend to end up looking bland. You can't accuse the HP Spectre x360 13 of that, and for its core business traveller market, it's an entirely suitable choice.

That being said, this market is awash with choices and a lot of competitive price-cutting, so it's well worth looking around and comparing your choices at the time of purchase.