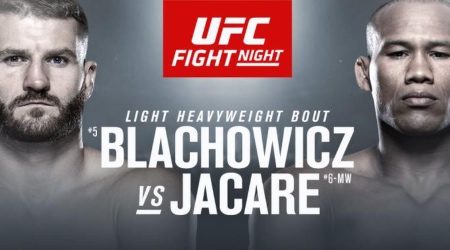 Jan Blachowicz faces off with Brazil's own Ronaldo Souza in the main event of UFC São Paulo.

Souza returns to Brazil and moves to the light heavyweight division just in time to come head-to-head with Jan Blachowicz at the main event during UFC Fight Night 164, scheduled to take place this weekend in São Paulo.

Further down the main card, the co-main event features a Rua vs Craig bout, which is likely to be Rua's last ever fight in the UFC as he has plans to retire. The Brazilian MMA legend won his last fight against Tyson Pedro via technical knockout last year, while rising star Paul Craig was victorious against Vinicius Moreira just a couple of months ago.

UFC Fight Night 164 will air live in Australia, so you can tune in and see for yourself who comes out on top. All in all, there's plenty to look forward to, thanks to an intriguing full card. MMA fans should definitely give this event a stream – there won't be another UFC Fight Night for three weeks.

Who will win Blachowicz vs Souza?

Souza will definitely face a big challenge with Blachowicz, as it happens for every fighter who changes weight classes. "Jacare" is looking for a fresh UFC start late in his career, but he'll be fighting in his home country which should positively contribute to morale.

Meanwhile, Blachowicz heads to São Paulo with five wins from his last six fights, so he should be in excellent spirits. He's coming off the best win of his career so far against former champion Luke Rockhold. If he wins against Souza, he will jump in the rankings for a shot at champion Jon Jones.

The odds are in Blachowicz's favour, but we wouldn't overlook Souza just yet. He's got plenty to prove, which might be enough to give him an edge this weekend.

When does UFC Fight Night 164 Blachowicz vs Souza start?

UFC Fight Night 164 starts on Sunday 17 November at 10am AEDT. You can tune in for the main card from 12pm AEDT.

How to watch UFC Fight Night 164 Blachowicz vs Souza live

In Australia, UFC Fight Night 164 will be broadcast live and exclusively on ESPN2. As a result, there are plenty of ways to tune in, whether you choose pay TV or streaming platforms. Here's everything you need to catch all the action live.

Kayo Sports offers coverage of over 50 sports, live and on demand, including plenty of MMA action. You can get a Basic subscription for $25/month and watch on two screens at the same time or a Premium subscription which supports three simultaneous streams for $35/month. Either way, you'll gain access to the platform's entire library and impressive list of features.

The sports streaming service lets you watch up to four videos at once on the same screen with SplitView, explore statistics during a game with Interactive Stats and hide scores with the No Spoilers setting. If you're running late, you can jump right to the action that matters with Key Moments. Or simply watch a Kayo Mini, which is a condensed version of an event and delivers the highlights in 20 minutes or less. Content is in HD and there are no contracts, so you can cancel your subscription at any time. Read more about the platform in our detailed Kayo Sports review.

Kayo Sports is available via web or you can download the app to your smartphone/tablet. Keen to watch on the big screen? The service is also compatible with Android TV, Apple TV, Chromecast and Telstra TV.

New subscribers get a 14-day free trial. That means you can stream UFC Fight Night 164 Blachowicz vs Souza completely free and test the platform's features at the same time. Or, if you're busy and can't watch live, simply tune in later and enjoy the fight on demand when your schedule clears up.

ESPN2 is part of the Foxtel IQ Sports HD channel pack. If you're a subscriber, you can watch the UFC event on TV or stream it to your laptop or mobile device with either Foxtel GO or WatchESPN. Both apps are free with your Foxtel Sports HD subscription.

You can take advantage of Foxtel's Christmas sale and get Foxtel Plus and Sports HD for $58/month on a 1-year plan. This also buys you the iQ4, the telco's most advanced set-top box that enables you to watch content in 4K and record live TV. If you decide to wait, Foxtel IQ deals are always available.

MMA fans can also stream ESPN2 with Foxtel Now, the service that lets you watch Foxtel channels live and enjoy on-demand content via the Internet. You will need the Sport channel pack, which costs $29/month. That's on top of the base Essentials pack, priced at $25/month. This one offers a mix of Pop and Lifestyle channels.

Subscribers can access Foxtel Now on laptops and mobile devices with the Foxtel GO app. The service is also compatible with Sony Android TVs, Airplay/Chromecast, Telstra TV, PS4 and the Foxtel Now Box. New subscribers get a 10-day free trial.

ESPN2 is available with Fetch TV as part of the Vibe channel pack. This one costs only $6/month, but the total price of your subscription will depend on whether you bought your Fetch box outright or got it through a broadband provider.

Besides the top two fights, MMA fans can enjoy a packed UFC Fight Night 164. Here's the full card for the event: