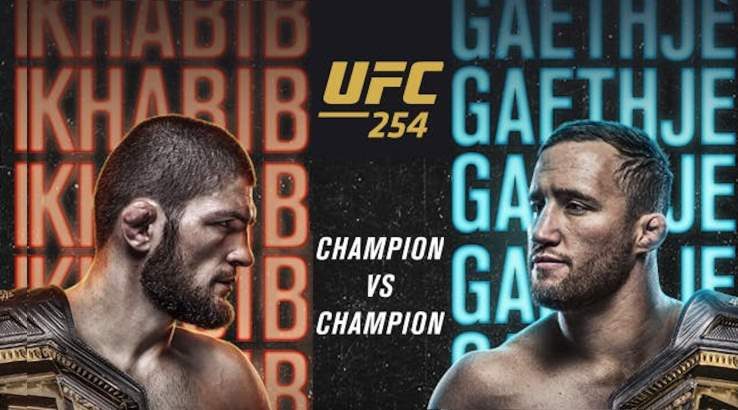 SUMMARY: You can watch the UFC 254 preliminary rounds for free on any device with Kayo Sports by using this 14-day trial, but the only place to watch the main card, including the Khabib vs Poirier and Whittaker vs Cannonier fight, is on pay-per-view..

All you need to know as a starting point for UFC 254 Nurmagomedov vs Gaethje is the fact UFC president Dana White says it is on track to become the biggest pay-per-view event in the organisation's history. It's that big.

Khabib Nurmagomedov is surely the most feared man in the UFC. Holding a perfect 28-0 record, the 32-year-old has comfortably handled any challenge directed his way thus far. He is naturally favoured against interim champion Justin Gaethje (22-2 record). But there is a sense the American has a decent shot at finally finding a way past the Russian superstar.

Australia's Robert Whittaker could also put himself in the frame for a rematch with middleweight champion Israel Adesanya if he can win his co-main event clash with Jared Cannonier.

When is UFC 254 Khabib vs Gaethje?

Fans in Australia need to pay close attention here as this showcase isn't being held at the usual time for a UFC main event. To appease Nurmagomedov's massive European fan base – the guy has almost 22 million Instagram followers – UFC 254 is catering to their timezone.

The prelims get underway at 3am AEDT on Sunday 25 October on Fight Island in Abu Dhabi with 3 fights, including Australian heavyweight Tai Tuivasa's bout with Stefan Struve. The main card kicks off at 5am with a stacked six-fight schedule.

How to watch UFC 254 Khabib vs Gaethje

As usual, you have a range of viewing options for the different stages of UFC 254. The preliminary fights are on ESPN, with the main card exclusive to pay-per-view on Main Event, and you can access both a variety of ways. Take a look at our complete guide to watching the UFC for more information.

How to watch UFC 254 preliminary card

In Australia, you can find ESPN content on Foxtel iQ, Kayo Sports, Foxtel Now and Fetch TV. There is also UFC Fight Pass. Among those options, Kayo is the pick for the preliminary card and more than 50 other live sports.

If you are yet to try Kayo Sports, it has a 14-day free trial. After that, a Basic subscription is $25 a month which allows you to watch on 2 screens. There is also a Premium subscription for $35 a month that gives you another screen. You can check out our full Kayo review for more information.

Kayo also has a wide range of special features, such as SplitView, where you can watch four sports at once on the same screen. It is compatible with Android and iOS devices, Android TV, Telstra TV, Apple TV, Samsung TV (2017 or later), PCs, Macs, Chromecast and AirPlay.

How to watch UFC 254 Nurmagomedov vs Gaethje main card

The main card of UFC 254 is a pay-per-view event that you need to purchase through Main Event. Foxtel, UFC Fight Pass, Fetch TV and PS4 are the providers of the main card.

You can order UFC 254 for $54.95 through a Foxtel subscription and you have a few options. You can go through the Main Event website, use your Foxtel remote, the My Foxtel app or order it over the phone. You can also order it over the phone if you have Optus TV featuring Foxtel. Ordering through a phone agent will incur an additional $2 booking fee.

UFC Fight Pass is another option and will also set you back $54.95. You can subscribe to Fight Pass for $10.99 a month or $104.99 a year for a load of UFC content, but main cards will still require an additional fee. Fight Pass is compatible with Apple TV, Xbox One, Xbox 360, Amazon Fire TV, iPad, iPhone and Android devices, Chromecast, PCs and Macs, Samsung smart TVs and LG smart TVs.

Live stream UFC 254 on your PlayStation 4

If you have a PlayStation 4, look for Live Events in the PS Store. Once you have purchased the fight you can watch it through the "videos" menu. Once again it costs $54.95 through this option or there is a discounted price of $49.95 if you are a PlayStation Plus member.

Who will win UFC 254 Nurmagomedov vs Gaethje?

Fight fans have been waiting more than a year to see Nurmagomedov get back in the Octagon. The Russian's last fight was a submission victory over Dustin Poirier on 7 September 2019. In that time, Khabib has also sadly dealt with the death of his father and trainer Abdulmanap.

It had been assumed by many in the MMA world that Tony Ferguson could be the man to truly challenge Nurmagomedov. But those thoughts were abruptly derailed when Gaethje dismantled the former champion at UFC 249 back in May.

Gaethje, who calls himself "the highlight", has shown dramatic improvement and will take the confidence of a four-fight winning streak to Fight Island. Yet while Nurmagomedov has had a less than ideal preparation, Finder's previous occasions to watch the Russian fight make it very hard for us to tip against him. We'll hope for a classic that goes the distance, with Nurmagomedov to take some hits before retaining his unbeaten record by decision.

The 76ers and the Nets can certainly attract the headlines. See what happens when they face off this Saturday.

Arsenal and Aston Villa will both be looking to find form when they meet in the Premier League this week.

This weekend sees 6 of the top 7 play each other - will the top 3 start to pull clear?

The 2021/22 NBA season is here and we're treated to a massive clash on opening day as the Lakers host the Warriors.