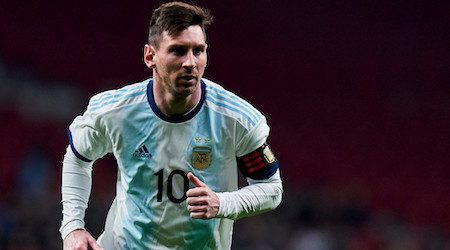 Here's how to watch the Copa America Final Brazil vs Peru, and the third-place play-off Argentina vs Chile, live stream.

The 46th edition of the world's oldest continental football competition featured the 10 CONMEBOL nations and two invitees in Japan and Qatar. The tournament started on 15 June to 8 July (AEST). There are three groups of four teams, each playing the others, then quarter-finals and semi-finals. Then on the last weekend we have the third place play-off and a final.

After a torrid tournament, the final is decided: Peru vs Brazil. The third place play-off is Chile vs Argentina.

When does the Brazil vs Peru Copa America Final start?

The 2019 Copa America final between Brazil vs Peru begins at 6:00 am AEST on July 8. It will be broadcast live on all four of the services compared below. If you are watching in an ACST time zone, you'll need to tuned in by 5:30 am, and over in Perth on the AWST time line, you're looking at a 4:00 am start for Brazil vs Peru. Kayo Sports will offer replays on demand later in the day.

When does the Argentina vs Chile Copa America third-place play-off start?

The 2019 Copa America third-place play-off between Argentina vs Chile begins at 5:00 am AEST on July 7. All four of the TV services detailed below will show Chile vs Argentina live. In the ACST time zone you will need to tune in at 4:30 am, and in the AWST you're looking at 3:00 am. Kayo Sports will off replays on demand of Argentina vs Chile if you want to sleep in.

How can I watch the Copa America Final online in Australia?

The 2019 Copa America is being broadcast in Australia through beIN SPORTS, which is available through Foxtel Now, Kayo Sports, beIN SPORTS CONNECT and Fetch. Below we will compare these options for you.

If you're only interested in sport but want all the sports channels Foxtel has to offer, Kayo Sports is cheaper. The Basic option costs $25/month and lets you watch on two simultaneous screens, while the Premium option is $35/month and allows you to watch on three different screens at the same time. Both options come with a 14-day free trial period.

Kayo Sports also offers a number of innovative new live sports streaming features we've never seen before - such as SplitView and Key Moments timeline - as well as additional content such as the Kayo Minis, which are condensed highlight packages of games. It's our pick as the best way to watch a Copa America live stream and you can dive much deeper into its feature in our review.

To stream Copa America on Foxtel Now you will need to pay for the Essentials pack, which costs $25/month, and pay $29/month on top of that for the Sport pack, totalling $54/month. It comes with a 10-day free trial for new customers.

beIN SPORTS CONNECT is available as a standalone service and costs $19.99/month (or $199/year) and offers a two-week free trial. While this is a cheaper deal than Kayo and Foxtel, it doesn't come with as many channels. The three beIN SPORTS channels are available on Kayo and Foxtel, as are eight Fox Sports channels and two ESPN channels, so there's a much larger range of sports on offer there.

Another option is through Fetch. Customers can add the beIN SPORTS pack for $19.99/month, with no lock-in contract. You'll need to already have the Fetch box and service running, and that monthly charge would be on top of what you already pay.

As hosts, Brazil come into the tournament as favourites, even though they're missing Neymar through injury. Before the 2014 World Cup, Brazil had been unbeaten for 39 years at home in competitive matches, but then the "Mineirazo" happened, as Germany beat them in 7-1 in the semi-final on the way to becoming world champions. While the Seleção do still have one of the strongest squads in the tournament, even without Neymar, the players will be under pressure to deliver and not suffer as they did in 2014.

This tournament represents one of the last chances for Lionel Messi to win a senior trophy for La Albiceleste, though Argentina are taking a young and inexperienced squad to Brazil. After losing three finals in three years from 2014 to 2016, this side also has plenty of demons it needs to exorcise. To have any chance, Argentina will need Messi firing on all cylinders and the rest of the team stepping up to support him.

Uruguay are always a danger and the tiny nation of 3.5 million people have won more Copa Americas than anyone else, with 15 wins under their belt. La Celeste will be hard to beat, as always, with a defence marshalled by captain Diego Godín, a young, exciting midfield, and some stardust upfront in Luis Suárez and Edinson Cavani.

Of the other teams, reigning champions Chile will be keen to bounce back after missing last year's World Cup, though the club form of Alexis Sánchez over the last 18 months will be of concern for La Roja.

Colombia will need James Rodríguez to recapture some of his form from the 2014 World Cup when he won the Golden Boot for his six goals in five matches and was arguably the tournament's best player. Los Cafeteros have a squad capable of challenging for the trophy and have unfinished business in Brazil after a controversial exit in 2014.

Peru surprised many by qualifying for the 2018 World Cup in dramatic style and Los Incas will be keen to build on that experience. Peru hadn't qualified for the World Cup since 1982 before last year and boast a talented generation of players.

Paraguay are in a tough group alongside Argentina, Colombia and Qatar, but won't be easybeats. The nature of the tournament means that the two best third placed teams will advance to the quarter-finals and it would be a surprise if Paraguay couldn't manage at least third place in Group B. Evergreen striker Roque Santa Cruz was forced to withdraw from the squad from injury and Los Guaraníes will miss his experience.

Venezuela's young squad can draw on the experience of the 2017 U-20 FIFA World Cup. A number of members from that team are now fully fledged internationals and will be in action in this tournament.

Ecuador had a disappointing end to the 2018 World Cup qualification, losing the last six matches after looking certain to qualify. Grouped with Uruguay, Japan and Chile, La Tricolor will be up against it.

Away from the altitude of La Paz, Bolivia have always struggled, and this tournament will be no exception. Being grouped with Brazil, Venezuela and Peru won't be easy and if La Verde can make it out of the group it would be an achievement.

The inclusion of Japan and Qatar is curious, but common in the Copa America as there are only 10 teams in CONMEBOL. Neither side is expected to progress far into the tournament but both will do well to use the experience as a learning curve.

This is Japan's second appearance, though in recent additions, teams from CONCACAF such as Mexico, the USA and Costa Rica have been invited instead. Of interest to Australian fans are reports that the Socceroos have been invited to the 2020 edition of the tournament.