How will Geelong fare without Patrick Dangerfield against fellow premiership fancy West Coast?

SUMMARY: Cats vs Eagles is only on Channel 7 in Western Australia. However, it's delayed by four hours. If you want to watch live your best option is to watch on Kayo Sports. You can watch for free with this 14-day trial.

Despite coming off a win over battlers North Melbourne, Geelong are looking shaky. Patrick Dangerfield will miss at least eight weeks after needing surgery on his ankle. The timing couldn't be worse for Geelong after West Coast bounced back against St Kilda.

However, if you simply went off the form guide West Coast are due to lose this week. The Eagles' first five weeks has resulted in a repetitive win-loss pattern. Tied three wins each, the winner of Geelong vs West Coast will be gunning for the top four.

When is Geelong vs West Coast?

How to watch Geelong vs West Coast

Western Australians consider yourselves unlucky this weekend. This is 1 of 3 games each in 2021 where both WA clubs are delayed on Channel 7 by up to 4 hours. Geelong vs West Coast will not be shown on Channel 7 in WA until 2:30pm AWST.

If you want to watch live you'll need to access Fox Footy. You can do so via Foxtel iQ, Foxtel Now or Kayo Sports. You can compare Kayo and Foxtel here. Otherwise for a footy-specific breakdown see our AFL streaming guide.

It's a huge round of AFL headlined by three fixtures on Anzac Day. Given Geelong vs West Coast is just the second match of the round, it'd be a great time to try Kayo's 14-day free trial.

All up there are hundreds of competitions and leagues on Kayo. They also recently picked up the VFL. You can see the full list of sports on Kayo here.

Kayo will add $25 or $35 a month to your monthly streaming bill. The only difference is that you can watch on three streams rather than two with the more expensive option. Telstra Live Pass customers can also score 80% off Kayo for 12 months by 31 May.

Kayo has a range of unique viewing features to add to your viewing experience. SplitView lets you watch up to four sports at once. There's a bunch of different format options with SplitView so you can easily focus on one specific game, while being able to keep track of others without focussing too hard. You can check it all out in our Kayo Sports review.

Who will win Geelong Cats vs West Coast? 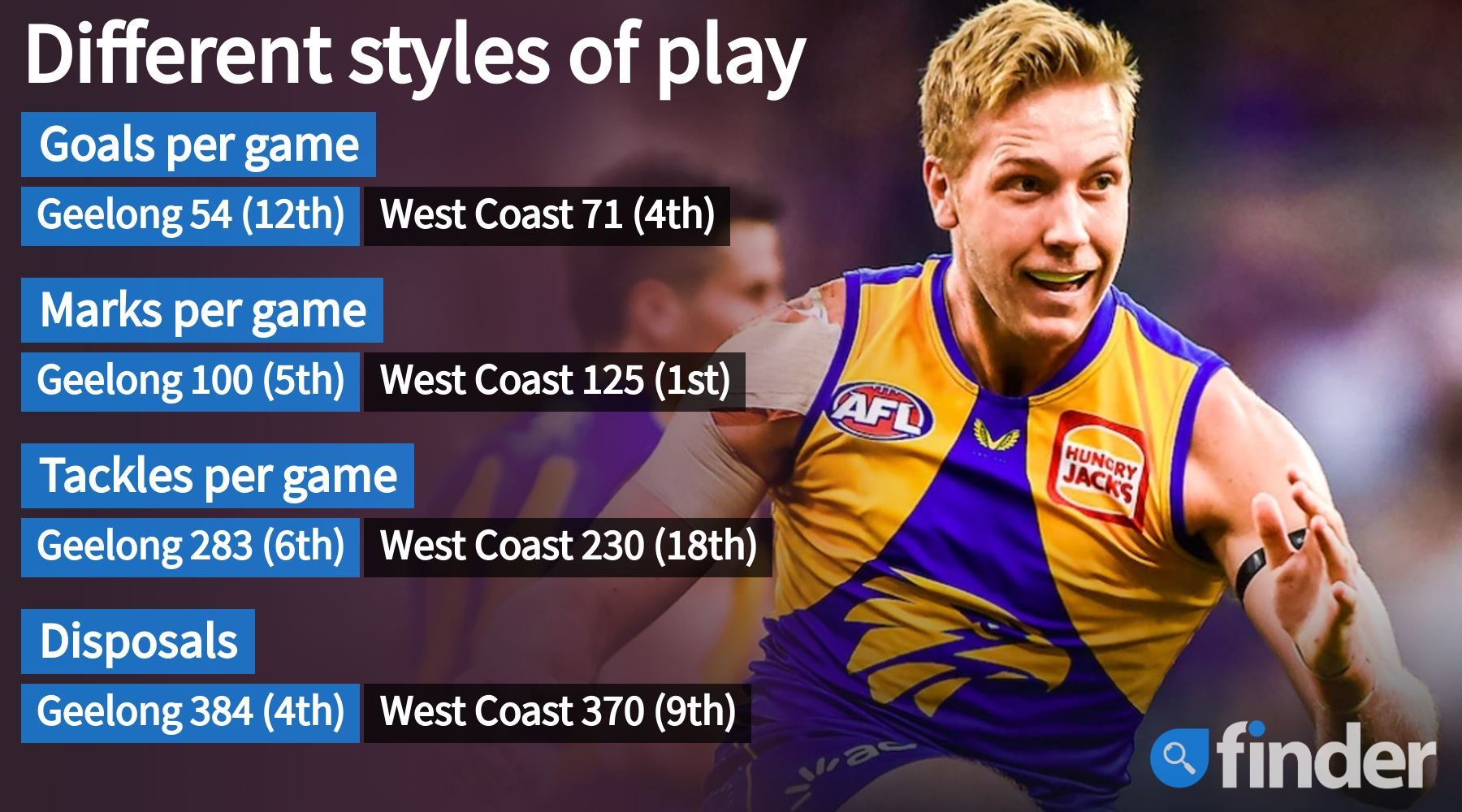 The loss of Dangerfield is a bitter blow for the 2020 grand finalists. So far Geelong have failed to demonstrate they are capable of going one better this year. On the positive side, former GWS star Jeremy Cameron will make his long-awaited debut for Geelong after overcoming his hamstring setbacks.

West Coast star Josh Kennedy missed training on Wednesday and is in doubt for the Cats game. The Coleman Medallist is battling to overcome an ankle injury from the Eagles' emphatic win over Collingwood.

"It's whether we roll him out there or freshen him up," Eagles coach Adam Simpson said. Former skipper Shannon Hurn (calf) is unlikely to play this week.

The Eagles have won just 1 match at Geelong this century, way back in round 10, 2006. "I think we played them 3 or 4 times (at Geelong) in my time with an average losing margin of 50 points and it's not because the ground is skinnier," Simpson said. West Coast's long injury list includes Luke Shuey, Elliot Yeo and Liam Ryan.

The Cats have been well below their best but we're tipping them to win by a whisker. With Cameron finally in the side, the Cats won't have to rely so heavily on Tom Hawkins as a focal point in attack. Geelong by 7 points.

You can see a comparison of Kayo vs Foxtel here. Otherwise if you'd like to see a demo of Kayo check out our review.