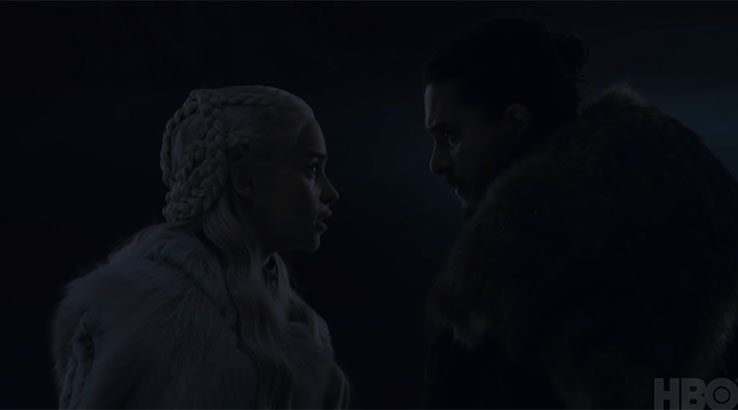 Can't see the death for the darkness in the latest episode of Game of Thrones?

Note: I'm absolutely avoiding spoilers for the latest episode of Game of Thrones here, but a lot of the chatter and feedback around the episode has talked about how dark the episode is. Here are some ways to make it a little more legible for your enjoyment.

Game of Thrones has always been a dark series. Yeah, you're shocked that it's rather grim, but for the third episode of the eighth series, the director has taken the "dark" bit rather literally.

"The Long Night" is very dimly lit, and that, combined with many watching through Foxtel Now's sometimes-compromised streaming bitrates, has led to many complaints.

Get deal
No installation and no lock-in contract. New customers only. Sign up now.

Without spoiling too much, even the trailer for the episode makes it clear just how dark this episode actually is.

So, there's a fresh and violent new episode out there, and you may find it hard to watch beyond the spectacle of who joins your local GoT dead pool. So what can you do?

Get your room lighting right

If you're watching on a big TV – or even on a tablet or a phone – the quantity of ambient light will have a really profound effect on how much of a given dark scene is actually visible. Here you want to emulate what you'd find in any given cinema, which is to say as dark as possible.

Allow your display to be the primary light source you're looking at because any light shining on the screen won't help you see it; instead, it'll either reflect or wash out your ability to see finer details. Draw the curtains, dim the lights (or switch them off entirely) and you may find Game of Thrones more watchable – and a damned sight more spooky too.

Note: Finder is not responsible for any soiled underwear as a result of watching Game of Thrones in the dark.

Here you've got to be careful because a lot of the settings on your TV don't always do what you'd think they might.

Your best first bet here is to check the pre-configured settings for your TV's various modes. These do vary by manufacturer, but the difference between "cinema" and "sport" modes could be the difference between seeing that wight sword or not before it impales somebody. What's more, if there's no difference, or it's worse, it's easy to switch back and lose none of your display's fine calibration.

What about the more manual controls, then?

Your natural inclination might be to tweak up the brightness on your TV to make the screen, well, brighter, right?

Wrong. For most TV panels, the brightness setting actually modifies the black level across the entire panel. Depending on the smarts of your TV's image processing, this could well lead to images that are even harder to see.

In most cases, dialling the brightness down could actually work better, but it's also worth checking your contrast settings. That's (broadly) the differences in overall brightness between individual onscreen items. Cranking that up might lose you a few midtones, but it could lead to a slightly clearer display for a dark episode like this.

Here, it's well worth seeing if your TV allows for a "custom" setting because then you can tweak away for visibility without impinging on your overall TV watching experience. Simply switch back to the standard mode you were using before once you're done. Easy!

If your TV has specific modes for enhanced contrast or energy saving modes, it's also worth checking if their presence or absence makes the overall picture a little brighter too.

If you're watching on a laptop, smartphone or tablet, your brightness tweaking choices are typically more constrained. Some integrated laptop GPUs may let you tweak your visual profiles, and some smartphones have "video enhance" modes that may help here, depending on the precise model. You're not going to lose much by switching them on and seeing if that makes much of a difference.

Wait for the digital copies

If you're watching Game of Thrones on Foxtel Now on a less-than-stellar connection – otherwise known as an awful lot of Australian broadband – then the chances are good that the adaptive stream has dropped you into a Westeros that is occupied by plenty of blocky characters that belong more to a Commodore 64 display than a 2019 flat panel.

If you're able to switch up to a faster connection with a new broadband plan (you can compare those here), that's one solution that could solve the long night woes.

Those low bit rates are a pain, but unless you're able to switch to a faster connection and see those bitrates rise, your best bet might be to wait until full digital copies are available to legally download.

Those should come to the likes of iTunes and Google Play once the season has concluded. A downloaded episode has no bitrate issues by definition, so you'll be seeing it as the director intended.

There's a hard truth underlying all of this, and it's that there's been a rather deliberate choice for this episode to be filmed very dark.

That's a tone choice – it probably helps to keep the CGI budget lower too – because shooting the same episode in broad daylight wouldn't make it quite as grim in nature.

To a certain extent, if you're not meant to see certain details in the episode, that may just be deliberate. If you do punch up the display to make those details more apparent, to a certain extent you're going beyond what was intended for this particular episode.

Wait for the books to catch up

Naturally, with a book you can make the pictures as high definition in your mind as you like, no 8K display required. However, the wait for that will certainly be longer than for the end of the TV series – and the way George R.R. Martin is going, probably longer than the proposed spin-off series too.