How to break into the property market: Get real! | Finder

How to break into the property market: Get real! 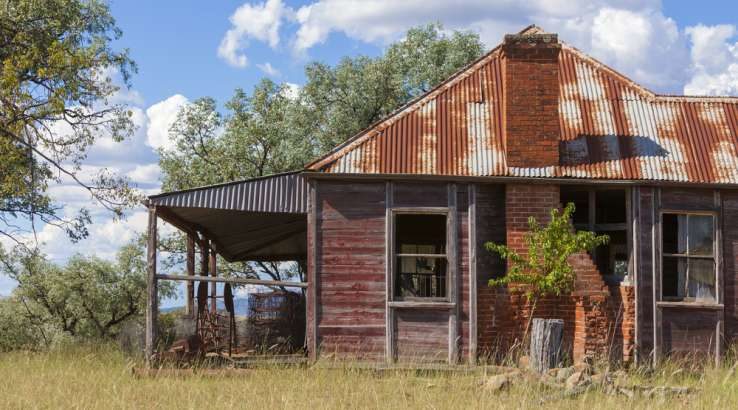 The most important real estate lesson is that you have to compromise.

"It needs TOO much work," muttered virtually every prospective buyer as they exited the open home inspections of the 87-year-old Californian bungalow that would – perhaps by default – become my home.

With its pink facade and tiny purple bathroom, the deceased estate, complete with its cracked walls and asbestos-laden rear extension, was put in the "too-hard" basket by just about everyone who saw it.

While some things were forgivable – the colour scheme, floral carpet and pet fur spring to mind – we were under no illusions about what exactly we were dealing with (and the building inspection confirmed our suspicions).

This house was a triple threat, of the literal kind. Asbestos, located in an industrial suburb, with an abandoned red bus in the street…. While everyone said "No thanks", my non-conformist side kicked in and I just knew we had to have it. As far as house-hunting goes, this property, with all its imperfections – and there were many! – was "the one".

Did we compromise? Absolutely.

Do we regret it? Absolutely not.

A recent finder.com.au survey of 2,022 Australians revealed the biggest property turn-offs Australians will overlook to crack into the market.

The promising news? Four in five Aussies (78%) will put up with some undesirable features for their slice of homeowner life. Think lack of cafe culture, buying a deceased estate, a house with the street number "13", or being located near a fast-food chain.

But when it comes to deal-breakers, our research also found that Aussies are less likely to overlook some things.

A house located in an area with a bad smell, asbestos in the walls or ceiling, and an above-average crime rate were the top "turn-offs".

Rounding out the top five were homes located in a street with abandoned vehicles, trailers or boats, and being located in an industrial area

But take it from someone who settled on a home complete with three of these deal-breakers (plus a flight path for good measure): I am one very happy homeowner.

Getting rid of the asbestos was not as costly as we'd expected and the abandoned bus, well, it never hurt anyone. It eventually disappeared, too.

The industrial area we live in has some of the best cafes in Sydney within walking distance.

As for the aircraft noise? "You'll get used to it," they said. They were right.

To prospective homeowners, I say this: keep an open mind.

Whether it's size, location, or features, compromise can go a long way when it comes to breaking into the property market. There's no such thing as the perfect property. What matters is that it's some form of "perfect" to you.

Property is the biggest financial decision of your life. It's also a long-term investment. While you may not realise it now, urban renewal and gentrification can completely alter a suburb's appeal, demographics and perception in the wider community – and, in many cases, capital growth potential.

So before you write off a shabby prospective home, ask yourself whether your deal-breaker really is just that – or an issue that can be fixed – now or later – or lived with. Who knows, the "flaw" might just be worth your chance at homeownership.

Bessie Hassan's Money Expert column provides advice to help you make the most of your money. It appears regularly on finder.com.au.