How much are head of state houses worth?

The White House is about to get a new tenant, but how does Donald Trump's new home stack up to those of other global heads of state?

A shock result in the American election last night means that Donald Trump will be taking up residence at 1600 Pennsylvania Avenue come January 20 of next year. But how does his new home compare to the residences of our Prime Minister, or those of other world leaders? We checked out the official homes of other leaders around the world to see which country’s top job comes with the best housing perks. 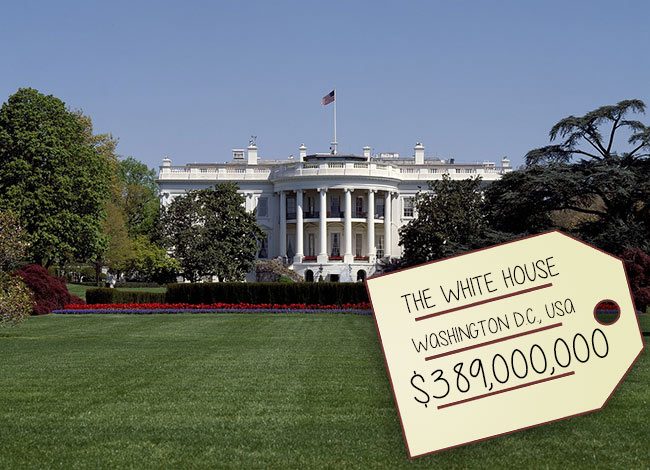 The presidential home in America’s capital differs slightly from some other official residences in that it’s simultaneously residential and commercial property. While the President and his family live in the opulent 132 room mansion, it’s also a working office for the Executive branch.

The residence was built in 1800, but was mostly destroyed when British troops torched it in 1814. Every US president since John Adams, the country’s second, has lived in the house. 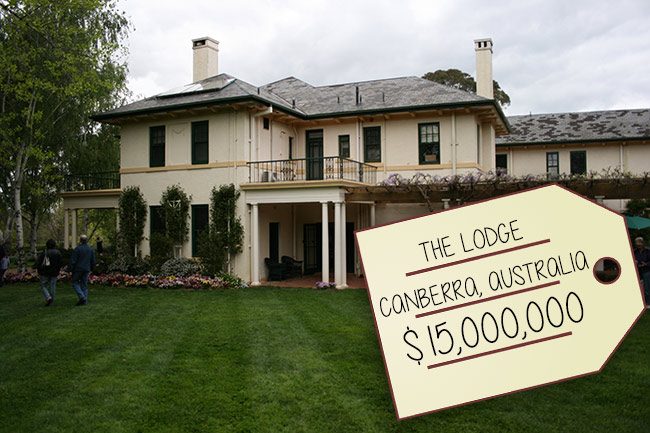 Perhaps the more official of the two official Australian prime ministerial residences, the Lodge was built in 1927, originally as a temporary residence for the Prime Minister until something more opulent and elaborate could be constructed. Apparently the 40-room Georgian mansion was deemed sufficiently opulent and elaborate, as Australian prime ministers have occupied the dwelling for most of its near-90 year existence.

The Lodge recently underwent a $9 million renovation. The update may have been long overdue, with a former Rudd staffer describing the residence as a “spartan convent”. In spite of the pricey upgrade, Domain has estimated the market value of the Lodge to be at a rather humble $15 million, which would still more than double the previous price record for Canberra property, set in 2010 for the $7.3 million sale of a Red Hill mansion. 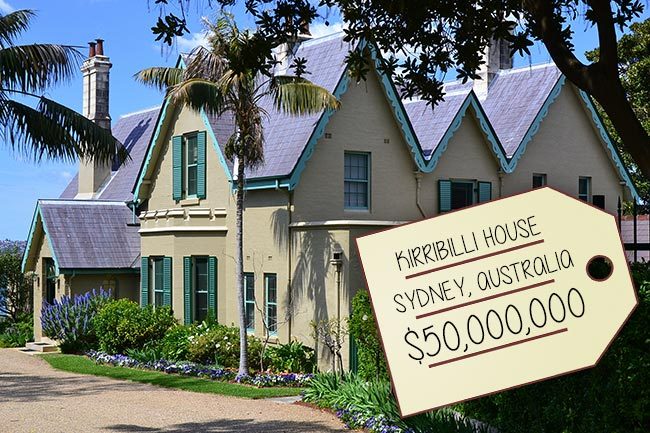 Kirribilli House is one of two official residences of Australia’s Prime Minister. The twin-gabled Gothic house was built in 1854 by merchant Adolphus Frederic Feez, and the harbourside home came into use as an official prime ministerial residence in 1956. 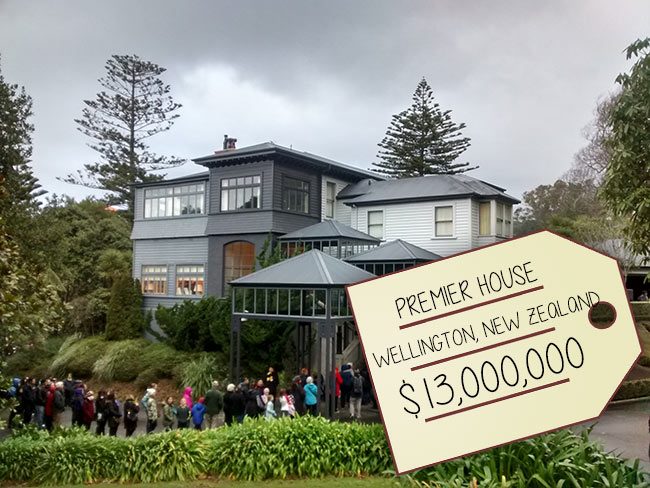 Across the ditch, our Kiwi brethren put their prime ministers up in the hilly suburb of Thorndon at 260 Tinakori Road. Premier House has had a tumultuous history as an official residence. First constructed in 1843 for Wellington’s first mayor, the home was purchased for use as a prime ministerial residence in 1865 when the NZ government shifted its base to Wellington.

The original wooden house has been extensively expanded and refurbished, and the sprawling residence is currently valued at just over $13 million. Like the Lodge and Kirribilli House, it’s not seeing much use at the moment. Both current Prime Minister John Key and previous Prime Minister Helen Clark chose to keep their family homes in Auckland while making minimal use of Premier House. 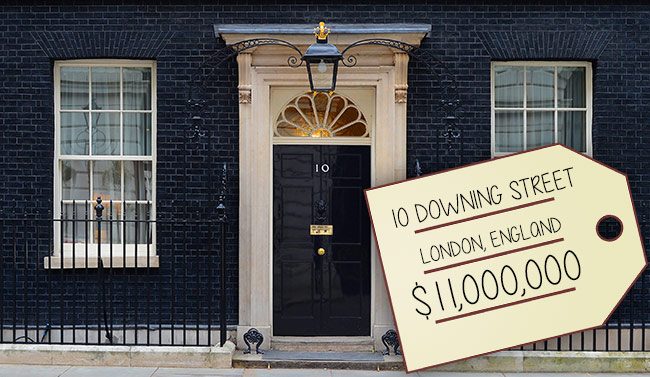 At least one famous political address is getting a new resident, with Theresa May replacing David Cameron as the UK’s Prime Minister. 10 Downing Street has been the official residence of the United Kingdom’s prime ministers since 1753. While the brick fronted terrace with its iconic black door appears humble from the outside, the residence is said to span more than 100 rooms inside.

A 2015 valuation put the price of the property at slightly more than $11 million. That’s an increase of nearly $3.5 million during Cameron’s term as Prime Minister. The property rose a staggering 40% in value under Tony Blair’s tenure, but fell in value under the watch of Blair’s successor Gordon Brown.

The home to Canada’s Prime Minister was originally built around 1866, but didn’t come into use as an official residence until 1951. The Victorian mansion has 35 rooms over four floors. In spite of its grand appearance, 24 Sussex Drive is said to be in horrendous disrepair. Former Prime Minister Pierre Trudeau’s wife Margaret famously called the residence a “large, cold, grey mansion”, and joyously announced last year that her son, current Prime Minister Justin Trudeau, would not be moving his family into the house.

The residence is due to undergo extensive renovations totalling more than $10 million. These updates could add to the property’s value, estimated in 2013 by real estate blog Movoto to be at around $7.65 million. 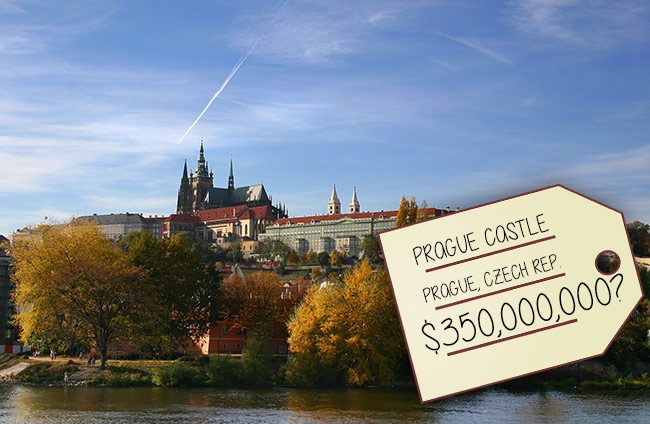 The Czech Republic’s Prague Castle may be the crown jewel of all official residences. With a turbulent and often violent history dating back to the 9th Century AD, the castle has been home to kings, Holy Roman Emperors, Communist dictators and even (for a single night) Adolf Hitler. It holds the Guinness World Record as the largest ancient castle in the world.

In addition to housing several museums, churches, gardens and a monastery, Prague Castle is also the official residence of the President of the Czech Republic. It is currently home to mercurial Czech President Miloš Zeman and his wife Ivana Zemanová.

It’s difficult to put a price tag on such a sprawling, historic site. However, the Global Property Guide currently puts Prague real estate at an average price of around $5,000 per square metre. Considering Prague Castle occupies 70,000 square metres, this would yield what is likely a very, very conservative estimate of $350 million. For that incredibly low price, don’t expect to get the Bohemian Crown Jewels, also a fixture of the castle, as part of the deal. 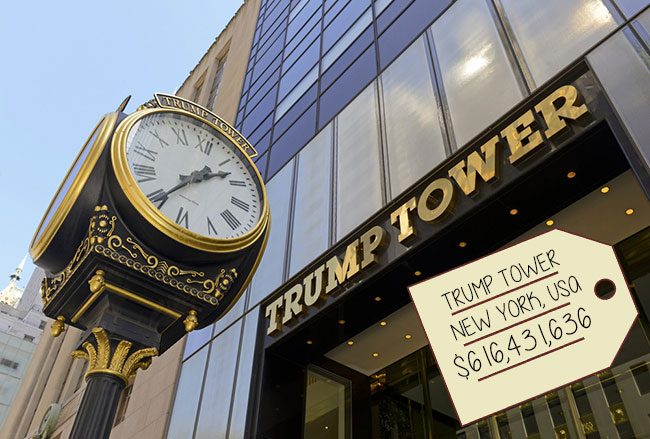 Donald Trump's current home is considerably more opulent than the one he's about to move into. Trump Tower sits at 725 Fifth Avenue, just a couple blocks from New York's Central Park. The building has had its share of notable residents, not least of which is the current President-Elect. Actor Bruce Willis, soccer player Cristiano Ronaldo, composer Andrew Lloyd-Weber, King of Pop Michael Jackson and deposed Hatian dictator "Baby Doc" Duvalier have all called the building home. It also stood in for Wayne Enterprises in the film The Dark Knight Rises.

Fortune Magazine puts the building's value at $616,431,636. That amount could buy the White House and have enough left over to purchase five of the other six properties on our list.