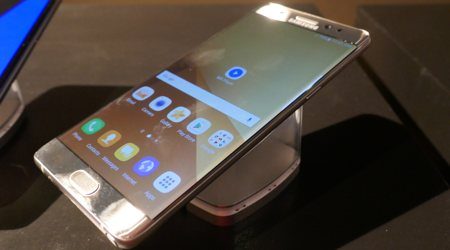 If you’re a Galaxy Note 7 owner, here’s what you need to do with your smartphone in light of Samsung’s recall action.

Following a rash of battery explosion issues in South Korea, Samsung has taken the step of recalling all models of the Galaxy Note 7 sold worldwide. While the company indicated late last week that it would look into refund, replacement or repairs, Samsung is step of recalling all Note 7 devices sold in Australia. According to Samsung, in the weeks since the Note 7’s launch, it has sold some 51,060 Note 7 phones locally.

Why is Samsung recalling the Galaxy Note 7?

The issue relates to a battery fault that so far appears to have only affected 35 Galaxy Note 7 devices worldwide. There’s no sign of the battery fault, which can cause it to explode, occurring in Australia as yet, but Samsung is recalling all Note 7 devices worldwide as a precautionary step. The fault appears to lie only in the battery used in the Note 7 itself; there’s no sign that it affects other Samsung devices.

What should I do with my Galaxy Note 7?

Samsung is asking all customers who have purchased a Note 7 to voluntarily return their devices to Samsung. If requested refunds will be issued, or alternatively a replacement courtesy device will be provided while Samsung waits for new stock of the Note 7 to be shipped into Australia. That’s expected to take between three and four weeks.

Replacement devices are expected to be available from Samsung from 7 September 2016.

So what do I do now?

If you’ve purchased a Note 7 device, the first practical thing you should do is back up your existing data on your Note 7 before wiping away anything personal. It’s not clear to what extent Samsung may reuse components or check data on devices recalled, so it’s best to be safe rather than sorry in terms of your own photos or other personal data.

You should then power down the Note 7 and contact Samsung to arrange your refund or replacement. Samsung has set up a web form, or you can call its customer service line on 1300 362 603.

What if I got my Galaxy Note 7 on a contract?

If your Note 7 was supplied by your telco, you should contact them to arrange for its return. Given it’s a core part of your contract there really shouldn’t be an issue with your telco if you wish to cancel the rest of your contract at that point; in fact for Optus or Vodafone customers you’d be well within the 30-day window where they offer that as standard anyway.

What if I got my Galaxy Note 7 from a retailer?

Samsung’s official statement suggests that you contact that retailer to discuss your remedy options. As all Galaxy Note 7 units have been recalled, they’re by definition not fit for purpose so Australian consumer law is rather firmly on your side if you want a refund.

Can I keep my Galaxy Note 7?

Strictly speaking, Samsung can’t compel you to return the goods already sold to you. However, this would be a remarkably unwise move. While it’s rare for smartphones to malfunction to this extent, the sad truth is that there have been injuries as the result of other smartphones malfunctioning. Simply put, it’s just not worth the risk.

Samsung Electronics Australia is today taking the proactive and voluntary step to recall 51,060 Galaxy Note7 smartphones. The recall is in response to the recent announcement by Samsung Consumer Electronics global regarding isolated battery cell issues with the Galaxy Note7 device.

Samsung Electronics Australia advises all customers who use a Galaxy Note7 smartphone to power off their device, return it to its place of purchase and use an alternative device until a remedy can be provided.

Alternatively, customers who have not purchased a Galaxy Note7 from Samsung can approach their place of purchase to discuss their remedy options.

“The safety and ongoing satisfaction of our customers is our top priority,” said Richard Fink, Vice President IT & Mobile, Samsung Electronics Australia. “We know our Galaxy Note7 customers are our most loyal customers and we are taking a proactive approach to support them. We are asking customers to contact Samsung or their place of purchase to arrange a suitable courtesy smartphone or refund.

Courtesy devices will become available from this Wednesday (September 7, 2016).”