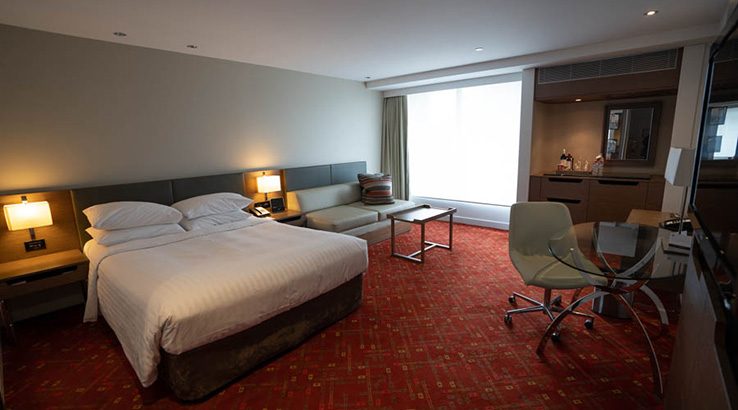 Experience larger-than-normal rooms within a 5-star setting in the heart of Melbourne's East End theatre district.

With flights to Melbourne and Harry Potter and the Cursed Child tickets in hand (yes, I went and it was incredible) the only thing left to do was book accommodation.

If, like me, you're making a trip of it, one of the best-placed luxury hotels is Melbourne Marriott. This 5-star hotel is literally a six-minute walk to the Princess Theatre, has larger-than-average rooms for the city and its local-produce-driven restaurant features pre-theatre meals. So you definitely won't be late to the show.

We were invited to stay in one of its deluxe city view rooms and needless to say, it was an exceptional experience.

Star rating: ★★★★1/2
Cost: On the higher end of the price scale, even for a 5-star hotel in Melbourne, at around $300 per night.
Location: Perfectly placed for East End theatre productions, to visit Parliament House and to dine in Chinatown.
Decor: A contemporary fit-out with high ceilings and Melbourne-inspired artworks and prints.
Check-in/check-out process: Quick and easy. No queues both times and we were able to check in early.
Rooms: At 36sqm, the deluxe room is generously sized, even for a 5-star hotel.
Food: The restaurant features locally driven modern Australian fare. Breakfast is a choice of buffet or à la carte with all your typical Western offerings.
Facilities: An indoor heated pool is attached to the gym which overlooks a private courtyard.

The deluxe city view room is Melbourne Marriott's cheapest option. Rates start around $300 per night, which puts it on the higher end of the cost scale for a 5-star hotel in the CBD.

Cheaper options include the IFSTAYS EQ Tower which has rooms from $230 per night, but this is an apart-hotel. A more expensive option is the QT Melbourne with its $355 per night price tag.

Tucked into the north-east corner of the Melbourne CBD, Melbourne Marriott is within a short walking distance to Spring Street and Lonsdale Street tram stops and Parliament railway station, which we used to get around the city with ease. The hotel is within the free tram network too which was a bonus.

Another bonus, particularly for our trip, is that the hotel is also located in the heart of the East End theatre district. In fact, it's so close that from select suites you can view the Comedy Theatre and Her Majesty's Theatre. From its doorstep, you can access foodie hubs of Chinatown and the Greek Precinct and the tourist meccas of Parliament House, Carlton Gardens and Melbourne Museum on foot. 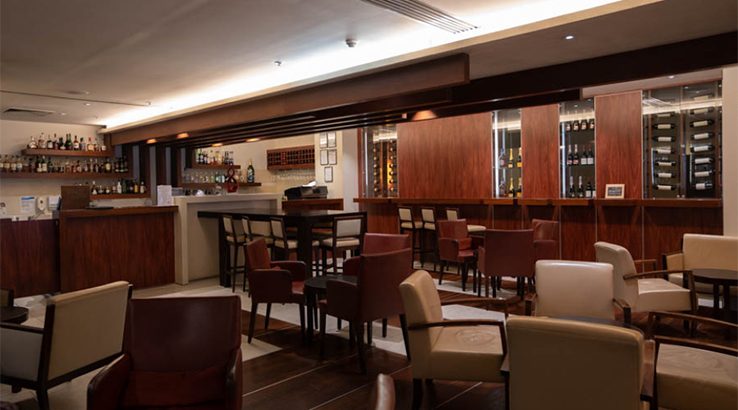 Contemporary and welcoming, the Melbourne Marriott lives off open and airy spaces. Floor-to-ceiling windows welcome passersby to peer into its restaurant, bar and lobby but inside you'll feel none of it as the hush of the city disappears.

The Elements Lounge and Bar is your secret hide-out, filled with neutral browns and a fireplace that cracks open in winter.

The rooms follow suit, fitted with contemporary neutrals though there's a subtle colourful throw to the city in the finer details. The carpet is patterned to resemble the Melbourne tram line while flashback pictures of Melbourne's nearby streets act as artworks in rooms and hallways.

We arrived early on a Saturday morning and made a beeline for the hotel, hoping we could drop our bags before hitting the town and checking in later. At 11am, there was no line at the counter and we were advised we could rest in the bar while our room was made up. We were promptly offered teas and coffees and in less than 20 minutes were given our room key.

Check-out was just as amicable and efficient, dropping the key off at the desk and settling the bill before heading off. The porter was even diligent enough to ask if we needed to store our bags for the day. Our bathroom in the hotel.

The moment we swept into our room we knew we'd arrived into something exceptional. Standard rooms are comprised of a short hallway, bathroom, bed and bar area with little room for anything else. Ours was more than generous with a separate alcove for the wardrobe and luggage as well as a living space with an actual lounge and coffee table.

The atmosphere was bright with light neutrals and white as the decor. There was a full-sized mirror beside the bed which was a wonderful addition that not too many standard rooms I've noticed include and there were delicate touches of Melbourne strewn throughout, including black-and-white photos of historical streets.

Something I found interesting is that no room has a bathtub, this being a predominantly business-focused hotel. In larger rooms, such as suites, this space has been replaced by larger wardrobe areas. We dined on the buffet breakfast which included your standard Western dishes such as eggs, toast, pastries and juices. There were a few left-of-centre items such as dumplings thrown into the mix, too. It was nice and the service was on point, but the food was nothing special.

If you haven't booked it with your room, it'll set you back $39 a person which can be viewed as steep if you're not a big eater. If this is the case, à la carte options are available. Otherwise you can explore the nearby cafes. This is Melbourne so there are plenty.

In the evenings, pre-theatre menus are available which are $49 for a 2-course or $59 for a 3-course and feature numerous gluten- and dairy-free dishes. As a point of difference, dishes are driven by local produce. 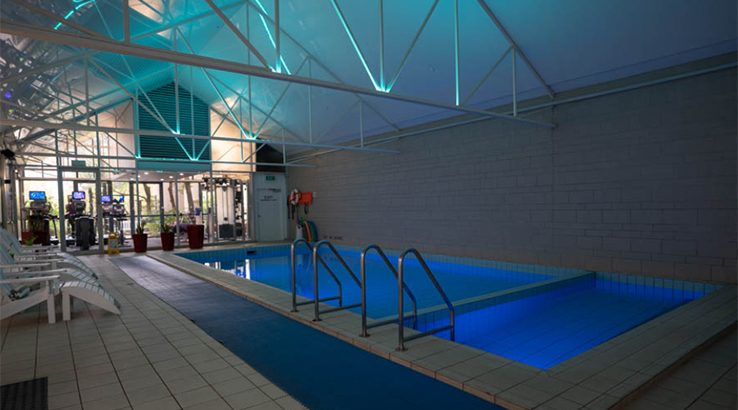 The heated salt-water pool with gym attached in the background.

The hotel has a heated and salted indoor pool which is a godsend in a city like Melbourne where the weather can be fickle throughout the day.

There is also a gym area with basic equipment, though no classes as the space is quite small. This overlooks a courtyard which is for guests only and is a secret little oasis among the bustle of the city and something I highly recommend exploring.

For business travellers, there are numerous meeting rooms of various sizes which can be booked and are located in a separate section of the hotel so you won't have wandering guests bothering you. There's also an executive lounge, available to guests of select rooms, which acts as a private space for meals, meetings and work.

The Melbourne Marriott is a delightful 5-star find in the east of the city. It's primarily a business hotel with basic pool, gym and breakfast options, but it's ideally located for anyone here to catch a show at one of the East End theatres.

I was particularly impressed by the size of the rooms, which felt more like suites with their lounge spaces and their service, which was friendly and attentive.

Book your stay at the Melbourne Marriott Hotel