A cheeky staycation in the heart of the city.

I've always toyed with the idea of a staycation but never felt compelled to commit. After all, why would I want to shell out a couple of hundred bucks for a night in when I can do so at home for free?

But having had Amora Hotel Jamison Sydney on my radar for a while now, tickets to a concert in the city and an occasion to celebrate (I may have gotten lazy with a Christmas present for the other half), I figured what the heck and booked a Friday night stay in the cheapest room possible.

What ensued was an unlikely upgrade to a Club Suite (which I wasn't advised about at all when I checked in) and waking up with that glowing feeling you can only get when you're miles away from home.

For a 5-star hotel in the city, ~$200 is your base cost for a standard room. At $192 for a base level deluxe king, the Amora Hotel Jamison is a well-priced option for anyone searching for a high level of luxury.

Centrally located, the Amora Hotel Jamison is a short walk from Wynyard station and a slightly longer one to Circular Quay station.

Its entrance is inconspicuously located on Jamison Street, which is a side street off the city's main George Street. This makes it feel like a secluded oasis in the middle of the city, but it also makes it a tad difficult to find. It's also uphill so if you have luggage or find inclines difficult, it may make the journey a little uncomfortable. 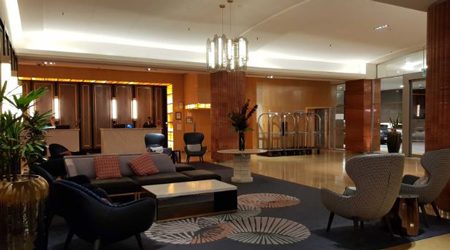 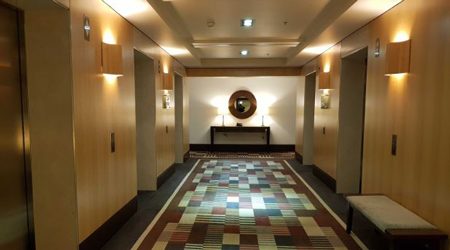 The Amora Hotel Jamison Sydney is a classic hotel that feels obviously refurbished. Its lobby features brown tones, richly coloured rugs and warm lighting. It feels homey, though it doesn't bask in much natural light due to its side-street positioning.

These warm tones flow into the rooms via plush seating and pillows in hues of grey and purple. This is met with modern trimmings such as brilliant white and black tiles in the bathroom, smart TVs in the living space and bedroom, and USB charger ports.

This was quick, professional and friendly. The only issue I'd have would be that I wasn't advised that our room had been upgraded as the check-in staff simply asked me for my ID and credit card before handing over my room key and directing me to the lifts headed for level 33.

What I found a little cheeky was that a few days earlier the hotel had sent an email offering discounted upgrades. Honestly, I was tempted as a higher floor location was going to set me back only $17 per night but having already splurged on a staycation I held back. I'm glad I did as I got the upgrade and then some for nix.

And while I wish I could say how I did it, I can't. I was carrying a backpack at the time and was wearing a bright blue dress and thongs, so I doubt my ensemble did the trick.

I also didn't ask for an upgrade or mention that it was a present for my husband. I did check in at 6pm so perhaps they just had a spare room and I was the last person to check in for the evening. The fact that they were offering upgrade discounts could be a red flag that the hotel hadn't sold its more premium rooms. That's my only guess. 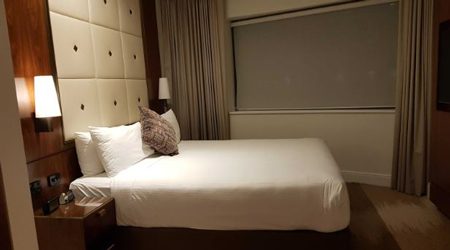 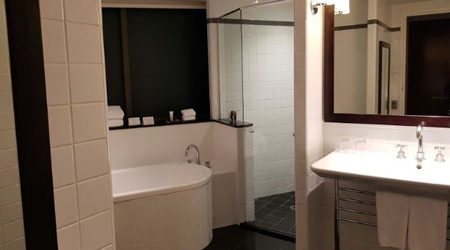 Every room within the Club Suite is spacious and inviting. The kitchen area sits in the hallway which leads to a living room that comes complete with an L-shaped lounge, a side table, a flat-screen TV, a chair and a working desk. The rooms overlook Wynyard Park though if you're lucky to score a Jamison Club Executive Suite, which is the next step up, you'll revel in views of Darling Harbour instead.

The bedroom and ensuite are separated by double doors, drawing comparisons to a one-bedroom apartment rather than a hotel room. The room is fairly standard with wardrobe, king bed and window, which annoyingly looks into an office building. However, there are blackout blinds for privacy.

A pillow menu was available however all four pillows were of different styles, allowing us to pick and choose which suited our sleeping needs best and no doubt contributed to us waking up refreshed in the morning.

The bathroom is modern though draws on classic elements such as a console sink with metal legs that reads slightly steampunkish. It boasts a generously sized bath; however, this seems to have compromised the shower space, which was quite petite.

What I found odd was that select amenities weren't readily provided. Instead, a card was left in the bathroom stating that toothbrush kits, sewing kits and other extras were available upon request.

This might have been an effort to reduce waste, but for a 5-star hotel, I would have expected it to be standard to leave them inside the room rather than force us to call up a porter to deliver the items. Which is what we did as yes, we left our toothbrushes at home.

The Amora Hotel Jamison Sydney is a gem in the heart of the city. Its service is friendly, rooms are impeccable and yeah, it didn't hurt that we were upgraded to a suite for the price of a king room.