Here’s why the cryptocurrency markets just bounced up so hard

The auspicious timing of this rise is well beyond coincidence.

After some decisive drops over the last few weeks, the cryptocurrency markets seem to have abruptly found some juice, with the total market cap rising about 10% over the course of a few hours.

It's the clearest bounce the markets have enjoyed in quite a while, with double-digit 24-hour gains being the norm for most coins. While it might initially seem a bit random, a closer look shows that the timing is auspicious beyond the point of coincidence.

According to CoinMarketCap, this rise started precisely 12 months after bitcoin cracked $20,000 en route to its all-time high – and that's precisely, right down to just a few minutes. 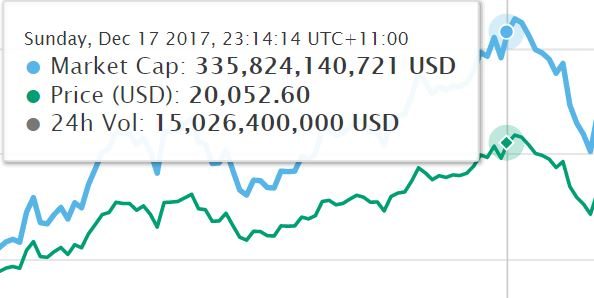 So, how shall we construe this?

One might argue that the timing here isn't actually that weird.

Certain time zones and times of day will see the most active trading activity, and you don't have to look very hard to find recurring patterns in trading.

The exact time of day is perfectly reasonable. It would have been 7.14am in New York, 8.14pm in Hong Kong and 9.14pm in Seoul and Tokyo, which means that window of a couple of hours is the strongest period of overlap between all of the world's biggest crypto-market time zones. If there's any time when the crypto markets would be boiling over, it would be in that narrow window of a couple of hours.

That this rise happened on the exact 12 month anniversary of bitcoin's peak might be a little harder to explain, although bitcoin is purely speculative so you can reasonably expect it to respond to sentiment more directly than other assets.

Traders might be responding to their own theories about Christmas being a good time for bitcoin, or people re-evaluating their finances at the end of the year and dropping spare cash into crypto or similar. It doesn't necessarily matter whether these theories hold any water, just that enough people expect other people to hold these kinds of beliefs – thereby buying up in anticipation of others buying up.

People are naturally irrational, so these kinds of psychological markers are important for stoking cognitive biases. The outcome bias may have people expecting this to naturally be a good time for crypto, even if they can't say why, while the presence of news about bitcoin's all-time-high anniversary in conjunction with availability heuristics has people buying.

It's basically pure superstition that has people buying up right now.

Someone's obviously manipulating the markets, maybe even trying to get the same people who FOMO'd in a year ago to FOMO back in now.

And have you even seen the kind of rubbish that's being pumped right now? Good lord, Dogecoin was one of the day's biggest winners. It's up 20%. And EOS was up 30% at one point. Bitcoin Private and Waltonchain are also among the day's biggest winners suggesting that it's not necessarily all about quality and real-world viability. Plus, many of the day's big winners seem to be predominantly coins out of China, and it's commonly held that most of the crypto market manipulation tends to emerge from China. The markets are green (for now), but the flags are red.

One year ago today, Satoshi Nakamoto ascended bitcoin to its all-time high to raise awareness of the technology – given to him by libertarian space aliens – to prepare Earthlings for the blockchain new world order that will soon be ushered in.

The subsequent fall was also part of Satoshi's grand vision, designed to make it more affordable for people to buy into bitcoin now that awareness has been raised.

The world had 12 months to accumulate bitcoin, and now that Satoshi Nakamoto has returned to Earth, it is time for the entire planet to be digitised and to join the great galactic blockchain where bitcoin is the only real currency and everyone drives space Lambos on the moon.

This is not financial advice.