Take the first steps in formalising a new business deal with a heads of agreement document.

Business transactions aren't always simple, which is where a "heads of agreement" can come in handy – especially during the first stages of a new business arrangement.

Read on and find a heads of agreement template and learn how to create the right document for your circumstances.

What is a heads of agreement?

A heads of agreement, also known as a head of terms, is a non-legally binding document that identifies the key terms and conditions of two parties that are entering into an agreement in the future.

Rather than being a legally binding document, this type of agreement is essentially an expression of intent from both parties and used to continue negotiations in good faith. You might also hear this document referred to as a letter of intent.

Get a heads of agreement template 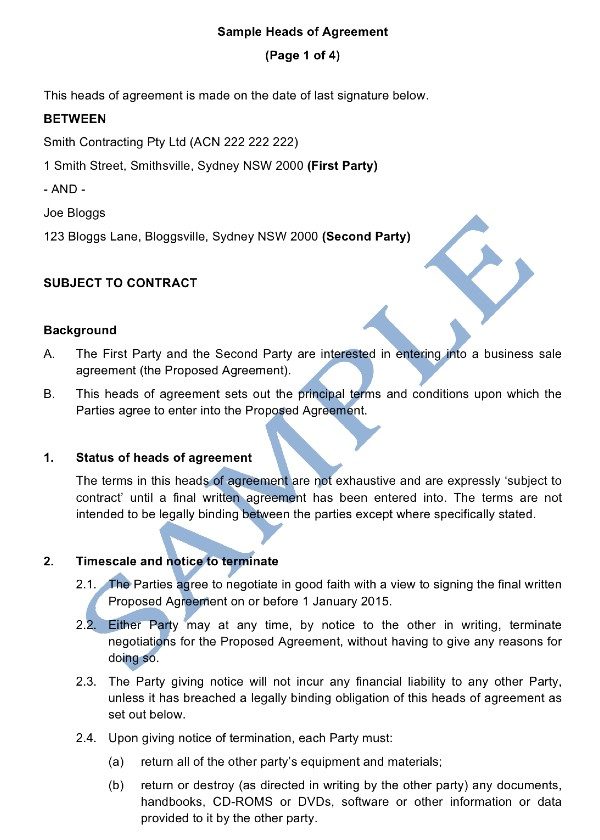 More on legal templates such as a heads of agreement

Using a heads of agreement template can make things a lot quicker when it comes to writing and drafting your document. Here's a rundown of where to find free templates online, including some that require a small fee or monthly subscription cost:

When should I use a heads of agreement?

A heads of agreement should be used during a period of negotiation before two parties enter into a binding contract. Generally, it can be used to validate prior discussions with another party or to record anything that has been verbally agreed before a contract is drawn up.

This type of agreement is often used by people who are planning to start a business together. However, it can be used for other purposes as well. For example, when two companies are negotiating a transaction or when someone is planning on buying over a business or its assets. It can also be used by someone who is looking for an exclusivity deal or who wants to get a documented commitment for the benefit of a third party, like a bank.

What does a heads of agreement include?

A heads of agreement should include several key elements that detail the offer on the table along with a proposed completion date, a list of agreed pre-conditions and an outline of both parties' main obligations and responsibilities. The key points with this type of agreement are usually as follows:

Heads of agreement vs memorandum of understanding

A memorandum of understanding is typically used prior to a heads of agreement, but it's not mandatory to do so. Although both of the documents are used as a precursor to a formal agreement, they act as subtly different things. A memorandum of understanding records the very first steps between parties and acts as an intention of common action. A heads of agreement is used when negotiations progress a little further and acts as a preliminary agreement to a contract, outlining more specific terms that may eventually form a formal agreement.

How effective is a heads of agreement?

Although heads of agreements aren't a legal necessity, you might want to consider using one before settling on a contract. It can help both parties involved in the contract to understand the exact terms and conditions of the agreement and prevent any misunderstanding when it comes to signing a legally binding contract in the future.

Do I need to use a lawyer?

A lawyer is not strictly needed to send a heads of agreement. However, with such a fine line separating this document from becoming legally binding, you may decide it's helpful to get some legal advice during the process of drafting one up. This could be through a heads of agreement template, or through actively seeking legal help from a professional.

How do I write a heads of agreement?

Writing a heads of agreement doesn't have to be a complicated process, but it's one that should be taken seriously. Start off by including the following key elements in your document, before adding any other clauses that are more specific to your agreement.

Partner with Finder
Back to top
Was this content helpful to you?
Thank you for your feedback!