Unless you’ve been following the blockchain gaming space closely, you no doubt missed the quiet reveal of HashCraft, a revolutionary mix of Minecraft and No Man’s Sky.

The first rule of blockchain gaming seems to be: don’t talk about blockchain gaming. When gamers see the word “blockchain” they tend to think “cryptocurrency”. And when they think “cryptocurrency” they tend to have negative thoughts. As if crypto is a gateway to some evil monetisation strategy, brought to you by the same jerks that cryptojacked your phone and bought all the graphics cards.

For this reason, games like Ubisoft’s HashCraft are announced in relative secrecy.

But blockchain and cryptocurrency are two separate things. Cryptocurrency uses blockchain, but so do many other industries. In particular, gaming. In fact, the application of blockchain technology to video gaming is set to be the biggest disruptor our industry has seen in a generation. It’s powering a future where we, the gamers, own and fully control not only the games themselves, but whatever we earn, create and level-up within them. Effectively, blockchain gives players ownership of their data.

That disruption is already in motion. Did you know Sony is moving towards using the blockchain to record who owns what on the PlayStation Network? That Fortnite creator Epic Games just partnered with a blockchain firm? Or that Microsoft is already using blockchain technology to handle its Xbox Live royalty payments to developers?

As we’ve seen many times in the past, Ubisoft is also looking to get ahead of the curve on this new technology. The industry giant is regularly a launch day presence on new systems, and always pushing at the boundaries of what games can achieve. It’s no different with the blockchain gaming disruption.

Ubisoft is a regular star of our GxB: Video Games and the Blockchain TV show, appearing at numerous conferences and actively talking up the possibilities of blockchain gaming. Early in 2018, it revealed the existence of an internal team, known as the Strategic Innovations Lab, who was experimenting with ideas in the blockchain gaming space.

At the recent Blockchain Gamer Connects San Francisco 2018 conference, Ubisoft's blockchain initiative manager, Nicolas Pouard, revealed what the Strategic Innovations Lab had been working on. The game is HashCraft, and finder saw it live in action. HashCraft is in very early development; effectively, prototype form. But it is in a playable state, and Pouard was able to show off a couple of minutes of gameplay, as well as talk through how the experience works.

HashCraft, as its name suggests, is heavily influenced by mega-hit Minecraft, but also nods towards Fortnite and No Man’s Sky. When the game begins, an island is randomly generated and you parachute your way down to it, much as you would bomb into a battle royale game. The record of that island generation process isn’t stored traditionally, however. It’s effectively the genesis block for its own unique blockchain.

Once you’re on the ground, you’re free to explore the landscape and then start crafting. Your goal is to craft challenges, quests that visitors to your island will need to complete. With a bright, colourful visual style, the procedural landscapes definitely have an alien, No Man’s Sky vibe. The avatar is small and cartoonish (Mighty Quest for Epic Loot?) and moves at a slightly unnatural pace over a world that feels large in scale.

It was unclear how deep your customisation of the environment could go, and how much crafting – and by extension resource gathering – is involved. Nor whether there would be enemies in play, or the ability to bring other objects into this world to help manifest your ideas. But the building blocks – pun intended – for a fun game are clearly there. How does HashCraft use the blockchain?

The "Hash" in HashCraft refers to the slang used to describe the process by which changes to a blockchain are confirmed by the community. It’s when your computer power is used to take a request and use an algorithm to convert it into an encrypted alphanumeric string.

This happens a lot in HashCraft, as each change you make is recorded to your island’s blockchain. Once you’re happy with what you’ve built you can make your island public, at which point others can explore what you’ve created.

By storing the entire HashCraft experience on the blockchain, it becomes decentralised and effectively owned by the community, not Ubisoft. The servers can never be shut down as they’re upheld by the combined power of the players’ computers. The game can never be hacked, and the individual players decide the fate of their creations.

This last point is important to understand. Pouard explained that players of HashCraft will be rewarded for uploading their island to the community with an in-game currency that is effectively a cryptocurrency, something you can exchange outside the game’s ecosystem for bitcoin, Ethereum or real-world cash at your discretion. Pouard explained that Ubisoft’s motivation here is to make the player a stakeholder in the game, an invested owner.

Of course, one of the most powerful features of the blockchain is the ability to set up smart contracts. This is a digital handshake deal where one party says, “I will give you this if you do that” and if the condition is met, the deal is executed automatically and instantly. This is a very powerful tool in gaming, especially in one where you craft challenges.

The end result for HashCraft is that as a player you could create this amazing island with brilliantly fun challenges. You could then charge an entrance fee for other players to come into that world and experience it. But you could also set it up in such a way that if they complete your challenges, they earn a monetary reward.

It’s pretty radical stuff, right? Imaging building a track in ModNation Racers and being able to say, “It’s $1 to play, but if you get a lap time of less than one minute, I will pay you $5.”

It doesn’t have to be money of course. Perhaps you create an amazing skin or earn a powerful object, and the master of your challenge earns one of those. The sky becomes the limit, but unlike previous games that have walked this path, you – not Ubisoft – retain the ownership and any monetary rewards.

“The prototyping team from our Strategic Innovation Lab designed a game named HashCraft. It allowed us to explore the possibility for the player to create their own Island and to share it with the community without any centralised servers. When the game is on, the player's PC works like a node in the network, which does store the history of past transactions, but more importantly, the data related to user-generated content.” - Nicolas Pouard, Ubisoft's blockchain initiative manager 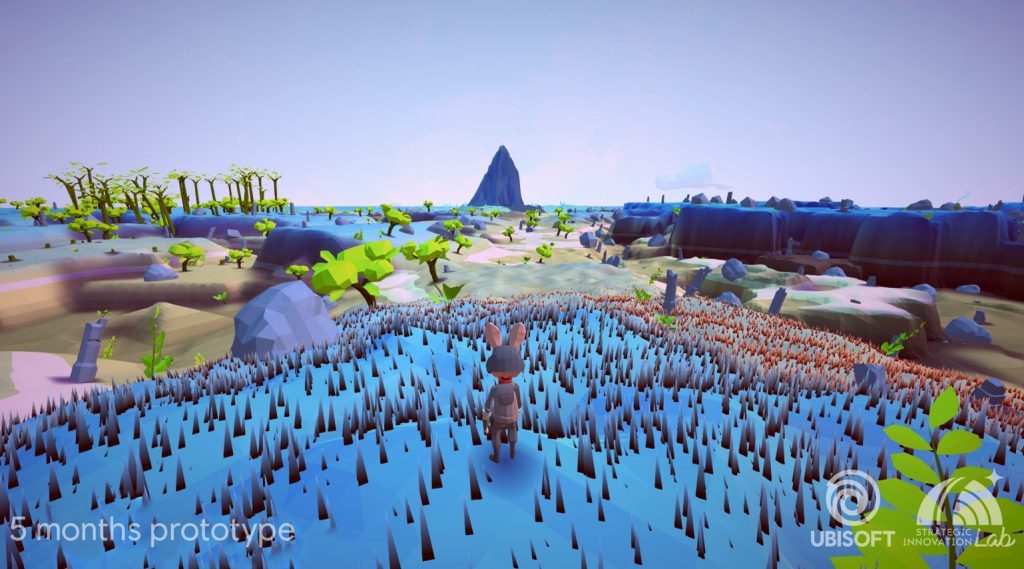 Will HashCraft ever come out?

As we discussed at the top of this article, the negative connotations surrounding the word “blockchain” among gamers makes it hard – even for a developer of Ubisoft’s ilk – to talk about projects like HashCraft as it would an Assassin’s Creed. However, you can absolutely guarantee that many of your favourite Ubisoft franchises will lean heavily on the blockchain in the near future.

A game like HashCraft would be the perfect little project to begin testing the tech and gaging gamer opinion without burning the goodwill of those invested in Ubisoft’s major brands. HashCraft the name may not see the light of day, but the experience we’ve seen prototyped will no doubt surface somewhere in Ubisoft’s future release schedule.

We, for one, hope that time isn’t too far away.