Hash Wars: Bitcoin Cash ABC takes early lead, but it’s not over yet 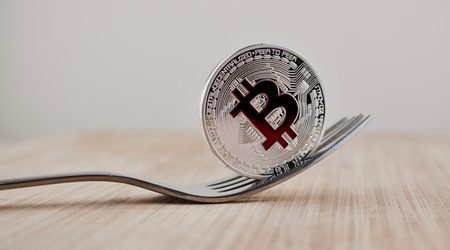 BCH ABC is clearly winning day one, but the full support of the Bitcoin.com mining pool won't last.

Begun, the hash wars have. And it's too early to call, but there's a clear leader in ABC already.

A hash war is when competing forks try to out-hash their rivals with mining power, essentially making it a very expensive way of lodging a vote. In this case the war is over a contentious Bitcoin Cash fork. The technical details being fought over are whether to increase the BCH block size yet again, with ABC being against it and SV being for it. Although there is little commercial interest in actually transacting with any variant of Bitcoin Cash, so functionally the outcome might not matter to anyone except BCH miners and others with a sizable personal stake in the outcome.

How to win a Hash War

A contentious fork is when a network can't agree which set of rules they want to follow, and hash wars are one way of solving it.

The goal is to win the support of miners, who can then throw hashing power at their preferred fork in the hope of demoralising the other to a sufficient extent that the other fork's miners give up, and cut their losses.

Miners are rewarded with coins of the fork they are mining, which means they want to side with whichever fork will have the most valuable coins in the end. If they choose a decisively losing fork, then their coins will end up being worthless and all the energy they have expended on mining the wrong fork is wasted. But miners who choose the correct fork can often cash in by earning coins which are likely to appreciate in value after the fight is over, as well as enjoying some lower-difficulty mining as long as network hash rate is split.

The two sides in this case are Bitcoin Cash ABC and Bitcoin Cash SV, and they are currently duking it out with the hope of demoralising the other.

And sometimes a hash war is inconclusive, and miners on both sides just keep on mining their preferred fork. This is what happened with bitcoin and Bitcoin Cash. When this happens, hashing power tends to reach an equilibrium based on equal mining profitability on either chain. But in this case the ecosystem probably isn't large enough to support two simultaneous Bitcoin Cash chains, and one is likely to wither away eventually.

The war is clearly tilting in ABC's favour just a few hours after beginning. ABC's hash rate has gained a decisive early lead, and at the time of writing Bitcoin Cash ABC is 30-something blocks ahead of Bitcoin Cash SV, according to CoinDance. The vast majority of the network's hash rate seems to know which side its bread is buttered on.

Too early for ABC to declare victory

No matter how you slice it, Bitcoin Cash SV is currently getting an absolute drubbing.

It currently has about a third of the hash rate of ABC, and even less popular support with less than 10% of BCH nodes getting behind it. The old BCH chain has already withered away, and it seems that almost everyone who is going to choose a side already has.

If it just continues as is, Bitcoin SV miners will be accomplishing nothing except throwing away money on a soon-to-be-dead fork. The leader of the SV fork can keep encouraging his minions to throw their hashing power into the breach, but it's increasingly clear that they are just wasting their efforts. Unless something changes they'll have to back out eventually.

To make matters worse for SV, it has recruited miners primarily with the promise of delivering them glorious profits after a swift defeat of ABC. However, the longer this drags on, the more money they're throwing away for uncertain returns. Eventually they'll realise the glorious profits are actually on the other side of the fence, and flip.

However, it might not be hopeless for SV yet.

Can SV come back?

At the moment, a full two thirds of the ABC hashing power is coming from the Bitcoin.com mining pool operated by Roger Ver, which has temporarily re-directed its entirety towards supporting the Bitcoin Cash ABC fork. Users of the mining pool will still be getting paid in their choice of BTC or BCH, but the hashing power itself is going towards ABC.

This will only be going on for a single day, after which users will once again be able to choose where they want the hashing power to go. Most will likely opt to go back to bitcoin for the additional profits left by the exodus of hashing power towards BCH during the fork. It's currently some 25% more profitable to mine bitcoin than Bitcoin Cash, so back to BTC is where many will go.

With two thirds of ABC's hashing power in limbo after a day passes, it's still too early to call the race one way or another. Plus, it's only just begun and there's still a lot of hash rate vacillation in both directions.

Having said that, even the total loss of all Bitcoin.com hashing power would only level the playing field, and leave both sides with roughly equivalent hash rates. And a total loss is unlikely. The bulk might switch back to BTC, but many will still opt to stay on BCH if that's where profitability lies. And those who remain will likely be sticking with ABC, because anyone who feels strongly enough in favour of SV has probably already switched to a pro-SV pool.

It's hard to see where SV is going to get the hash rate it needs to overtake ABC, and its best case scenario might be the creation of a new coin. The markets are also still leaning towards ABC over SV, roughly in line with the hash rate breakdown. SV IOUs from Poloniex and Bitfinex are only trading at about a third of the price of ABC IOUs.

The owner of the SV fork, Craig Wright, has repeatedly said on Twitter that this is going to be a marathon rather than a sprint, while threatening legal action against his pro-ABC rivals like Bitmain CEO Jihan Wu.

Entertainingly, Wright has been simultaneously calling Wu a "socialist" while threatening him with legal action for failing in his fiduciary responsibility to shareholders, suggesting that Wright doesn't really grasp at least one of those two concepts.

John McAfee has also taken advantage of the moment to chime in on Twitter, posting a screenshot of an objectively schlocky email he apparently sent to Wu. One might find it hard to shake the feeling that all this fork drama is just the result of people getting bored after a year of relatively stagnant crypto markets, and looking to entertain themselves with a bit of LARPing. 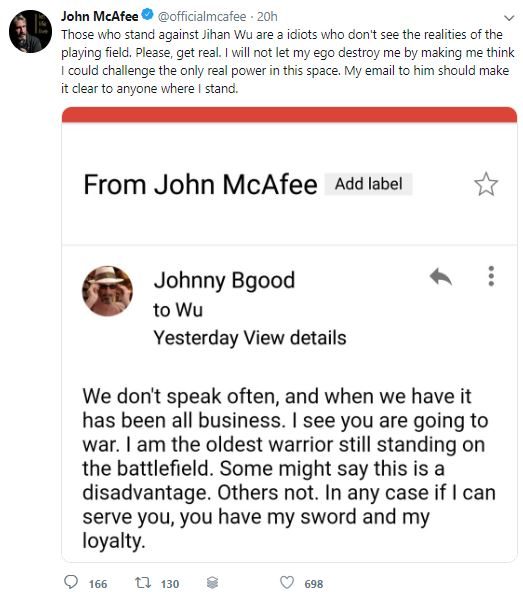