Half of cryptocurrency users happily admit to lying to the IRS 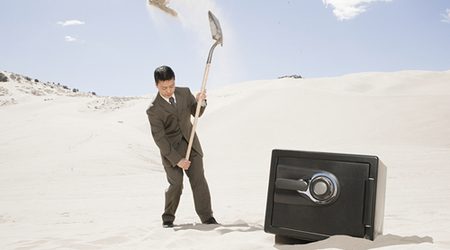 There's no doubt about it. Cryptocurrency users are absolutely lying to the taxman.

Recent figures from Credit Karma have found that out of 250,000 filers, less than 100 were reporting capital gains from cryptocurrency, causing some to cautiously speculate that "there's probably a lot of underreporting".

These unusually low figures have been explained in different ways, but the most obvious explanation is also the most likely. Underreporting is simply rampant.

A recent survey from Blind, an anonymous social app for tech employees, has helped clear things up. From the horse's mouth, it's clear beyond a shadow of a doubt that a huge portion of cryptocurrency users are not reporting their cryptocurrency profits. In a survey of over 2,600 anonymous individuals who made money from cryptocurrency in 2017, almost half (46%) admitted that they have not, and would not be, reporting it.

Despite the promise that the IRS would be targeting cryptocurrency profits this year, much like the ATO is, plenty of people are willing to risk the IRS' ire rather than pay taxes. However, those who used Coinbase between 2013 and 2015 might be less likely to get away with it.

On the whole, this should probably come as no surprise.

They ended 2017 with a six digit capital gain on paper. Unfortunately, the crypto markets crashed a few weeks later, leaving the total value of their cryptocurrency holdings around where they started. But because the new year rolled over after the trade, they couldn't write it off as a capital loss against the previous year's taxes.

"I feel like I might have accidentally ruined my life because I didn't know about the taxes," they said.

According to the anonymous individual, they were most likely going to immediately sell off their remaining cryptocurrency in case the price dropped further, and would be foregoing all savings for the next decade or so, while they paid off the tax debt they unintentionally incurred.

For those in a similar situation, the story might have served as a cautionary tale about the consequences of doing the right thing.

Some cryptocurrency fans also dug deep and managed to come up with philosophical arguments against paying taxes – an ethical stance which may or may not be tied to the amount of money they owe the IRS.

"The United States federal government is guilty of a lot of crimes I can't, in good faith, contribute to," argued one Reddit user.

Elsewhere, some crypto users are allegedly getting more creative. One YouTuber claimed they were hacked out of $2 million worth of cryptocurrency while livestreaming on YouTube on 15 April, but certain inconsistencies have viewers crying foul and speculating that it was a last ditch effort to somehow avoid paying taxes on their earnings.

Similar speculation has been running circles around developers of the Verge cryptocurrency, whose bizarre fundraising efforts are culminating in an announcement around tax time.

It doesn't help that cryptocurrencies are arguably the most complicated taxable assets/currencies that have ever existed. Between forks, airdrops, massive fluctuations, taxable crypto-to-crypto transactions, the possibility of spending a portion of someone's taxable appreciating assets as a currency, and the impossibility of retrospectively tracking the myriad fragments of every cryptocurrency transaction, it's possible that a lot of people simply couldn't be bothered.

Australia is operating on similar cryptocurrency tax laws as the USA, in which earnings may be subject to capital gains tax. If the USA is any indication, Australian cryptocurrency users might also widely underreport any gains. It's safe to say that both the IRS and the ATO are going to be in for a busy year.

If you are in a similar situation, or otherwise want to give your two cents, the ATO is looking for feedback on cryptocurrency tax reporting requirements. But generalising the Blind survey results, 46% of people might not want to risk drawing attention to themselves by leaving feedback.