Graceful Explosion Machine's inspiration is blindingly obvious, but in this case imitation by way of upgrade is indeed very flattering.

From the first second I started playing Graceful Explosion Machine (PlayStation 4,, Switch and PC) it felt instantly familiar, and it didn't take very long at all for me to peg exactly why this was so. It's a space shooter which puts you in command of the eponymous Graceful Explosion Machine (GEM) fighter, seeing off wave after wave of enemies with an array of four powerful weapons.

So far, so good, so very retro in its styling. I can well remember that a vast quantity of 80s arcade games were just this xenophobic, with little thought to the way of plot, because there were aliens to explode, and that's what aliens are for.

Graceful Explosion Machine's inspiration is a little more direct than most, however. It's essentially the classic Defender with a very bright colour swap, but the same essential gameplay intact.

Defender, if you've never played it, is one of the classics of the arcade scene, a hard-as-hell shooter with a prerequisite for hyper-fast reflexes and a very unforgiving set of aliens who would ultimately always win, no matter how many times you hit the hyperspace button.

Back in the 80s in arcades, you could get away with that kind of approach, because when you're just dropping a 20c piece into a machine for a few minutes of fun, longevity isn't an issue and hard can be OK. For a home game, though, Defender was a harder sell, and to mitigate that, Graceful Explosion Machine does mess with the formula a little.

Your GEM fighter in Graceful Explosion Machine is equipped with four primary weapons to see your foes off with. There's a basic blaster that heats up with excessive use, a rotating energy sword that's one half offensive weapon, one-half shield, a concentrated sniper beam and an array of missiles to finish off your armaments. You're also not stuck in a one-hit-kills-scenario, with your ship able to survive multiple hits before exploding when you get shot or crash into one of your many foes.

You've got to keep all but the blaster powered up to keep them functional, and this means that you'll frequently switch weapons mid-attack simply to keep on blasting, although I did find the sniper beam the least used of my choices. For the PlayStation 4 version reviewed, they map simply to the front facing buttons, with shoulder buttons used for fast dodging moves as well. It's a simple scheme that works pretty well, and I could see Graceful Explosion Machine working very well on the Nintendo Switch as a portable game as well. 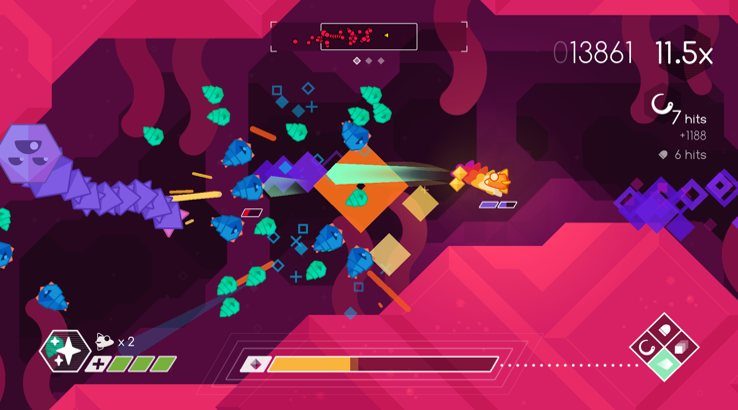 Like Defender, the screen in Graceful Explosion Machine wraps around if you fly too far to the left or right, which means you can't outrun your enemies and instead have to outfly and outshoot them over the game's

At a basic level, Graceful Explosion Machine won't actually take you that long to finish, because the one thing it didn't pick up from Defender along the way was punishing difficulty. That's a good thing because it makes it a more appealing pick-up-and-play type of game, rather than just one for the retro gaming masochists.

Instead, to appease that crowd, there's a linked kills combo mechanic that applies to your score at the end of each level, meaning that folks who obsess over high scores and score chasing generally can do so to their heart's content. That's clearly the core market for this kind of game because once you've worked through the tutorial, which gradually introduces your four core weapons and movement options, there's no further ability tree to unlock, but plenty of aliens to blow into colourful confetti.

We reviewed Graceful Explosion Machine on Nintendo Switch with a copy provided by the publisher.

Graceful Explosion Machine is a game that sits in an unusual spot, because it's not as hardcore as some bullet hell shooters, but it's still predicated on the idea that you'll be happy chasing high scores and combination attacks to give it value.

It takes the core Defender concept and tweaks it for modern sensibilities and colour schemes,
and does so in a way that's both charming and engaging for quick bursts of frantic play.