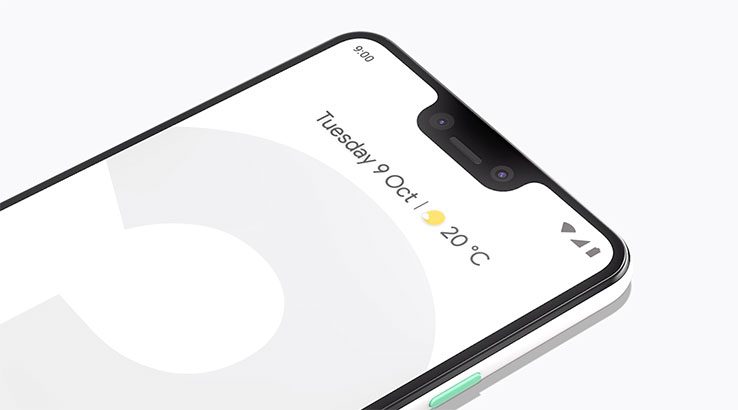 If you're after a smaller premium smartphone, should you opt for the Pixel 3 or the Apple iPhone XS?

Google Pixel 3 vs Apple iPhone XS: What to look for

Smartphone launches are all about hype, and both Google and Apple brought plenty of that to bear with their recent launches of the Apple iPhone XS and Google Pixel 3 families.

There's no love lost at all between the iOS and Android camps, with Apple often jibing about Android updates, while Android itself has taken the prominent position in terms of handsets sold worldwide.

Undoubtedly, the hardcore fans would never even invite the possibility of "switching", but if you're a more regular phone user, it's a comparison worth considering. So how do the two phones stack up against each other? 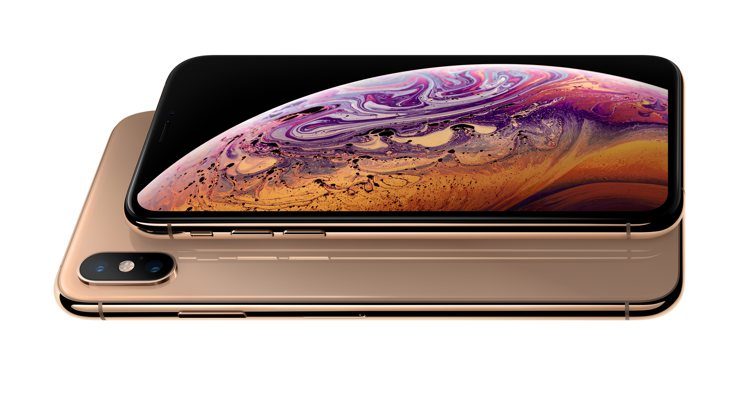 The Pixel 3 runs on a Snapdragon 845 processor, which is quite standard for a 2018 Android flagship. That's paired with just 4GB of RAM, which is somewhat low when other Android flagships offer 6GB or even 8GB in some models.

Then again, Google has the exact same advantage that Apple has when it comes to building smartphones because it controls the operating system. Android has to run across a huge variety of platforms, but Google can precisely optimise Android for the Pixel 3. Android 9.0 ("Pie") is already available for 2017's Google Pixel 2 family, and it makes those phones really sing. The same should be true for the Pixel 3.

However, with the iPhone XS, Google faces a stiff challenge. The A12 Fusion processor that powers the iPhone XS is an absolute world beater, and one that bests every Android device we've ever tested running the Snapdragon 845 in benchmarks and in real-world performance by a wide margin.

The practical reality here is that both should be fast and slick phones in real-world operation. The Pixel 3's close ties with Google will naturally see it incorporate Google features such as search, photos and Gmail more smoothly than on iOS, but then the same is true for Apple features such as mail, iCloud and macOS integration. 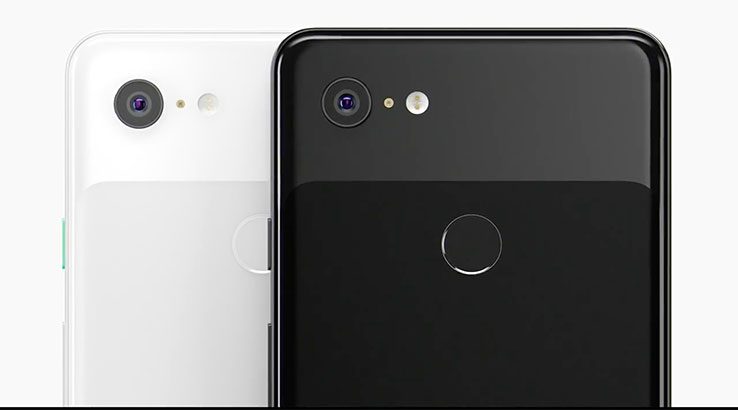 Google has stuck to its philosophy of a single rear camera for the Pixel 3, supplemented with machine-learning-based improvements in each and every shot that you take.

Google's promising a range of camera optimisations, from the "top shot" feature, which uses a burst mode and machine learning to select the "best" picture and avoid closed eyes or sneezes, or improved low-light photography, although that won't be available at launch.

Google itself didn't shy away from comparisons with the iPhone XS, showing off this comparative shot (which it claimed was untouched) at its Pixel 3 launch event. 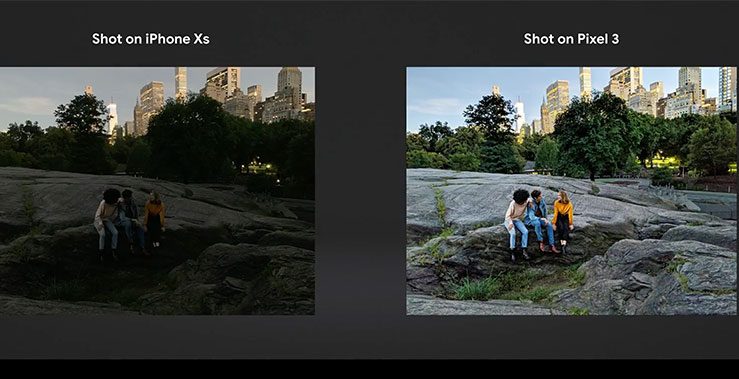 The iPhone XS camera is identical to that found on the Apple iPhone XS Max, with a dual rear lens array and larger individual pixels for improved low-light performance.

The iPhone XS can manage post-shot focus changes in portrait mode, and in our tests, it's a superb performer, right up there with premium offerings such as the Samsung Galaxy Note9 and the Huawei P20 Pro. Google's Pixel 3 is going to have to work hard to stand out, but then this is something Google's managed before.

One point of similarity between the two handsets is how they're pitching at more everyday photographers with a focus on automated shot selection, rather than manual features. For the vast majority of photographers that's a smart move, but if you prefer precise selection, you may find the stock camera apps approach somewhat limiting. 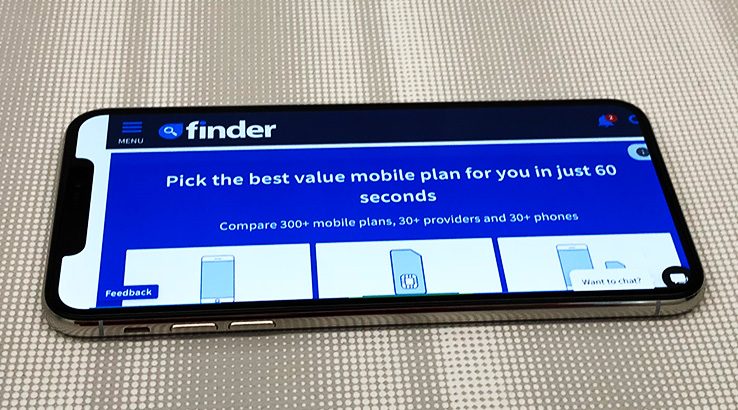 Apple's history with battery life isn't, to put it politely, a terribly happy one. Apple has long worked towards providing thinner handsets, but this has come at a cost in terms of overall battery capacity. By 2018 flagship levels, the 2,658mAh battery in the iPhone XS is tiny. It's actually slightly smaller than that found in the 2017 iPhone X.

However, the Pixel 3 isn't exactly packing a huge battery either. Its 2,915mAh battery is well below that of many other flagships. For both phones, if you want more battery capacity, opt for the larger model instead – the iPhone XS Max or the Pixel 3 XL respectively.

They're both based on the Qi standard, and any Qi charger could charge both. Google will bring its Pixel Stand to the market shortly, but we're still waiting for any word on the availability of Apple's once-hyped Airpower charging mat. 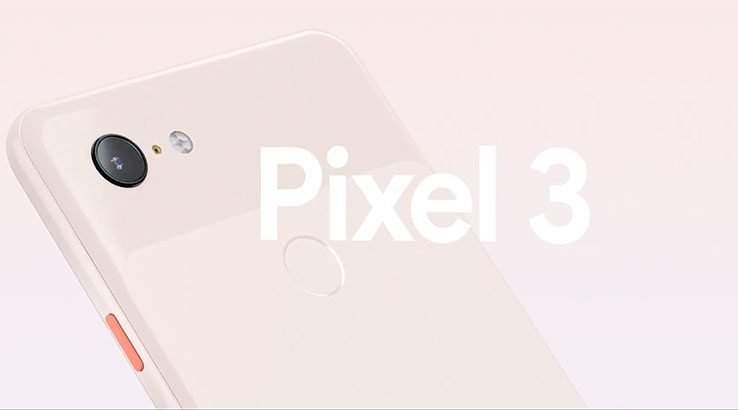 The Google Pixel 3 will be available in Australia from 1 November, priced at $1,119 with 64GB of onboard storage, or $1,349 if you want 128GB. Like the Apple iPhone XS, there's no capacity to boost that storage with microSD expansion, but this has long been a feature of Google's Pixel phones.

Telstra was the exclusive launch partner for the Pixel and Pixel 2 generations, but now Optus and Vodafone are both offering the Pixel 3 on contract, too.

Comparatively, Apple's pushed itself into the position of having the most expensive handsets in Australia, and by a pretty wide margin. The iPhone XS sells for $1,629 for the 64GB model, $1,879 for the 256GB model and an eye-popping $2,199 for the 512GB model.

It's available across major carriers on contract terms, which you can check below: