A tighter HBAR supply may have helped this news drive prices in a much bigger way.

Google Cloud will operate a Hedera network node, and make the Hashgraph ledger's data available alongside the other ledger information available on Google Cloud Platform. But perhaps more significantly, Google will now have a voice in the governance of the Hashgraph network.

For a sense of what that looks like, let's check the minutes of the last Hashgraph council meeting.

The meeting is called to attention

The last Hedera council meeting was on 10 October 2019, called to order by Brett McDowell, Hedera executive director and vice-chair.

Hedera CEO Mance Harmon opened the meeting by providing an update on network activity, noting that the mainnet was averaging about 500,000 transactions per day, or about 5-6 per second, most of which were driven by practical applications rather than simple cryptocurrency transfers.

The network was performing well, but tokenomics remained a challenge, Harmon observed.

"What has emerged as a challenge after Open Access was Hedera's coin economics model, as the price of the coin dropped from US$0.12 in the final SAFT round to a price of $0.038. As a result, a number of the SAFT 3 investors are upset and expressing their displeasure," the minutes note.

It's not just about satisfying investors. Hashgraph tokens need to have a certain value attached to them for the network to function as intended, and a certain level of performance is needed to attract users to the network.

"Differing from the original Hedera coin economics plan, and in line with recommendations from the community, coins from Treasury may no longer all be released on a pre-determined schedule, but instead, discretionary releases may occur as appropriate as the network matures and usage grows."

HBAR is currently trading at about $0.40, there's only about another 200% rise needed for SAFT 3 buyers to break even. Many of those who bought into the cheaper SAFT rounds, meanwhile, have just turned a profit.

Is that a lot? On the whole, yes. It's tough to say how much prices "should" have increased by, or to say that this is disproportionate to the news, but when people formed a mental association between Chainlink and Google, the price rise was in the order of 75%. Meanwhile, none of Hedera's other council members appears to have driven anywhere near this much price action.

Either way, the price change is just plain big.

The news of Google joining the council also had a plainly visible impact on Hashgraph network activity, mostly in the form of a lot of tokens moving, visible on the Kabuto Hashgraph explorer, and others. 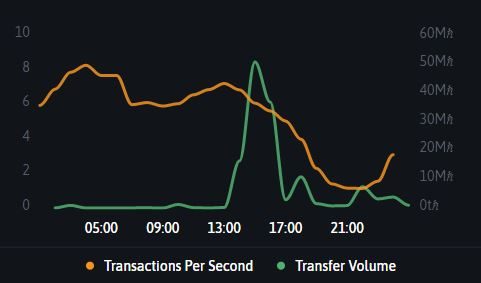 Now that those tokens are presumably changing hands on exchanges (mainly Binance, judging by HBAR trading volume), they're not registering on the mainnet anymore, hence the apparently reducing transfer volume in the above chart.

In fact, zooming in to just the last hour of mainnet Hashgraph transactions, we can see that there are entire minutes of practically zero on-chain volume, punctuated by what appear to be large individual transfers. 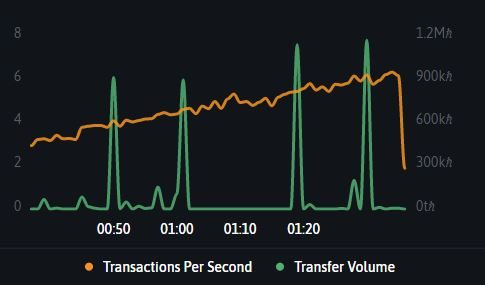 Each of those green spikes is a one minute span, and since that's as small as the chart goes we can reasonably assume that those are individual transfers, each worth a few tens of thousands of dollars. It could be buyers walking home with their new bags, sellers who wisely came to market late, or exchanges doing things behind the scenes.

Either way, the relative lack of on-chain activity, except for those spikes, suggests that most of what's happening with HBAR is happening on the market right now.

The total volumes are also interesting and go a very long way towards explaining why HBAR keeps climbing this hard and fast.

All up, at the time of writing, Hashgraph's total on-chain transaction volume over the last 24 hours is about 143 million HBAR. That's almost 10% of the total amount of HBAR distributed to all SAFT participants to date.

But before the rise, that was just a remarkably measly US$2.8 million worth. After today's big rise, it's still just a measly $6.3 million or so. By contrast though, Hashgraph's 24-hour trade volume across all exchanges is about $80 million at the time of writing.

This enormous disparity suggests that it's often the same tokens trading hands over and over again, and that the low supply is just as important to this price rise as the newfound demand is.

A tighter supply and slower release schedule seem to be working for now. It seems to have gone a long way towards helping news like this light a fire under token prices.