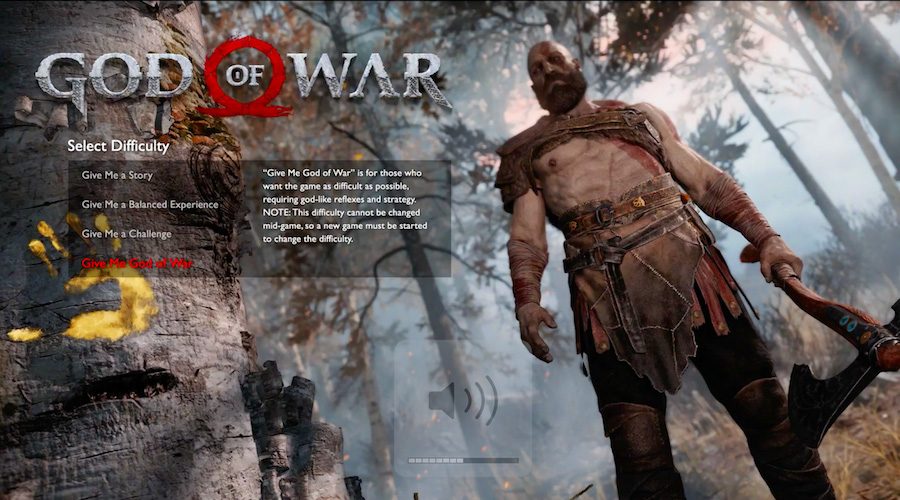 God of War is the highest rated game in the series but what you might not know yet is that this eighth entry is also the most difficult.

God of War is the highest rated game in the series (thanks to a godly Metascore of 95) but what you might not know yet is that this eighth entry is also the most difficult. By far. Like, Dark Souls levels of pain. I recently had the opportunity to sit down with Game Director Cory Barlog to relate my own frustrations with it and to ask why he and the team got so sadistic this time around...

Cory, I'm no stranger to the God of War franchise and I've finished every entry on the hardest difficulty available. That said, I had to do two things recently: pass a kidney stone and try to finish your latest on Give Me God of War difficulty – I think the latter experience was more painful...

So I have to ask you, what compelled you to hit so hard this time around? Because this is such a step up from the last God of War you did [God of War II]. Do you just expect more from players nowadays?

CB: Look, I think players have raised the bar over time and certain games have increased the challenge so much. Jason McDonald is our lead combat designer and he came to me and did this sort of mad drawing of all the different ways he wanted to manipulate the system [for Give Me God of War difficulty]. He told me “I want to take this farther than we've ever gone before”. So we separated the difficulty out, made it so that it was a super commitment – you can only do this difficulty and you can't jump out once it's been selected. And then he started breaking it down with all of these charts of different things he wanted the enemies to do.

Our lead combat designer, came to me and did this sort of mad drawing of all the different ways he wanted to manipulate the system [for Give Me God of War difficulty]

He didn't want [the difficulty] available right away, he wanted it as an unlock at the end. But I said, I love all this and I want people to dive into it from the start. You know, that Mega Man feel where you start and it's like, look, if you're c-r-a-z-y enough go dive into the deep end, do it.

I've since seen a bunch of people try to start up on it, and when they hit that first fight they're just like...nope.

I did that, I'm embarrassed to say. Time constraints for getting the review done made me back off, though I've started again and I'm about ¼ through it now. I don't think I've yelled at my television this much in years.

CB: Well it's good that you're back again. That's what we wanted to do, increase the aspirational curve of things. And this mode isn't like previous games where we had an algorithm that would mess with just damage dealt and damage taken – which is how we deal with the other difficulties lower than this one. But yeah, Give Me God of War is separate. It's the brainchild of Jason McDonald. He's gonna love your kidney stone comparison.

Sadly, I don't think the word is out about how different this mode is. I've had friends who are critics wrongfully say “yeah, the enemies are just more spongey”. I've been advertising it to them, pushing them to go get their arses kicked and appreciate what's changed,

CB: Oh, it's so much more than that. You've got different enemies at different levels. You've got enemies with D-trees – or “decision trees”, how they choose to attack, etc – being totally different. Jason went so deep on this thing. And I mean his favorite game is Nioh, which he calls “the game of the century” or “the game of the “millennia”. So to him, he wants something really challenging, and he was the guy who would beat our earlier very hard modes. He has a trophy named after him called “The Speed of Jason McDonald” because he's the fastest at beating games and is such an incredibly skilled gamer. Most of our team are of the Bloodborne, Dark Souls level of masochism.

As for me, I'm not even through my playthrough of Give Me God of War. There's only so much pain I can take, and then I'll go back to a lower level. I mean, it is hard, hardcore.

Thanks for your time Cory, and also for giving me a name to my pain: Jason McDonald.

Before we close, here are my top five (non-spoiler) tips for those of you about to foolishly attempt Give Me God of War difficulty on launch day...

Find the cheapest place to buy God of War

Just don't do it. Play the difficulty below first. Learn the parry system. Learn the pros and cons of using your fists versus the axe. Learn the basic attack patterns of your enemies. You'll be so much happier attempting this as a second run.

Never get sandwiched – evade using X so that the entire mob of enemies in front of you all of the time (Kratos can't magically insta-parry people trying to stab his kidneys.) If you use a heavy attack (R2) to knock an enemy on their butt, be aware that this will piss them off and make them enter a regen state (indicated by a blue glow). If in about three seconds you fail to knock them out of this state with another heavy hit, your life will get quite a bit harder. They will heal fully and enter a berserker state (indicated by glowing white eyes). When in berserk their attack strings can no longer be interrupted with your heavy blows, nor can you hit them to the ground again to earn yourself a bit of breathing room.

You're going to want to upgrade Atreus' ranged capabilities first. Having the ability to sap enemy life from afar using his arrows is an invaluable tool to have. Plus there are a few enemy types that are simply too fast for you to hit effectively, so super-size your son early. Second priority should be your Spartan Rage capabilities.

Be aware of your surroundings, in particular, any abyss drop off in the vicinity. This doesn't work all of the time, but I've found a few arenas where you can one-shot tough baddies right off the cliff with a timely R2 uppercut. Basically, put your back to said cliff and make like a Spanish bullfighter – when the enemy commits to a charging attack, dodge around behind them and smack them off.

There's nothing worse than getting pegged in the pancreas by a fireball when you're laying into an ogre. Freeze these sorts of enemies with an axe throw when you're on approach, then take them out of the fight early. Be aware that more will usually spawn in (so treat the purple enemy indicator like a major alarm). Kratos is incredibly weak in the early phases of the game. Three hits and you're out. Don't risk it.
Looking for an unholy deal on God Of War? We've compared prices from every Australian retailer

The journey Norse is an unusually thoughtful and technically impressive entry that revitalises the God of War series.