GoCube review: A Rubik’s Cube that’s smarter than you are

GoCube review: A Rubik’s Cube that’s smarter than you are

Quick verdict: If you've ever struggled with the algorithms behind the iconic Rubik's Cube, the GoCube will either make you into a cubing genius or overwhelm you with its own cleverness. 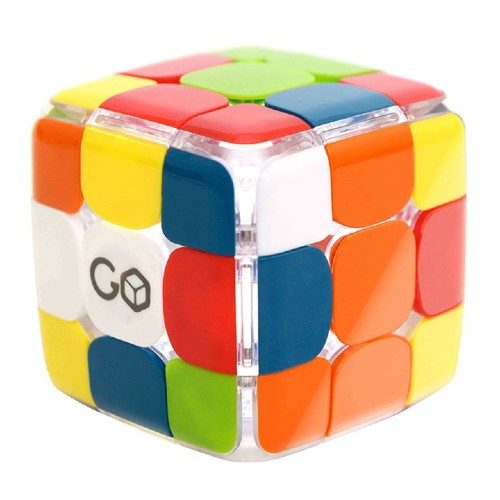 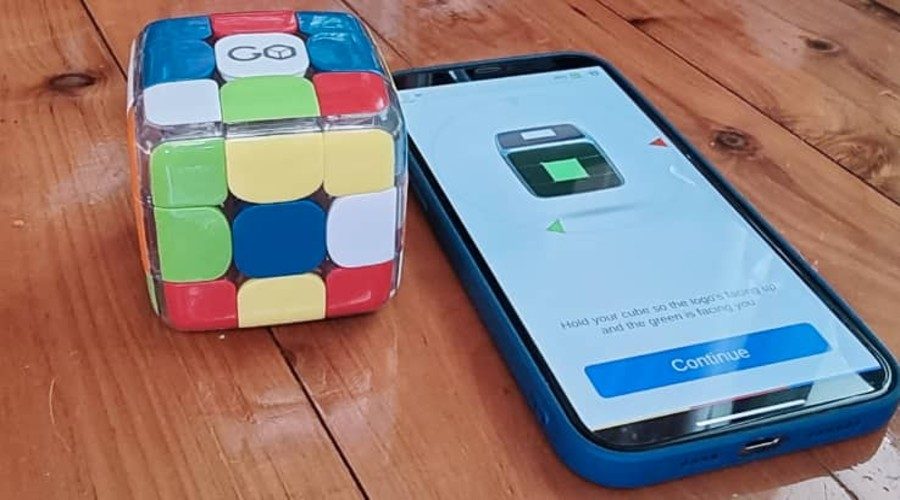 The Rubik's Cube is an iconic puzzle toy. There really can't have been that many people who haven't been faced with one at least once, although for most of us, the frustration of the underlying algorithms behind the puzzle means that it's a colourful if somewhat frustrating diversion. If that's you – and it's most certainly me – then the GoCube can almost certainly help.

Officially speaking, the GoCube isn't a "Rubik's" cube because that's a trademark. It's just a 3x3 puzzle cube with coloured sides.

Oddly, there is a GoCube licenced variant, the Rubik's Connected cube that appears to be much the same thing, only with official branding and a slightly different edge colouring system.

Keeping all this straight in my head is making it spin. Maybe it's time to delve into the puzzle toy instead? 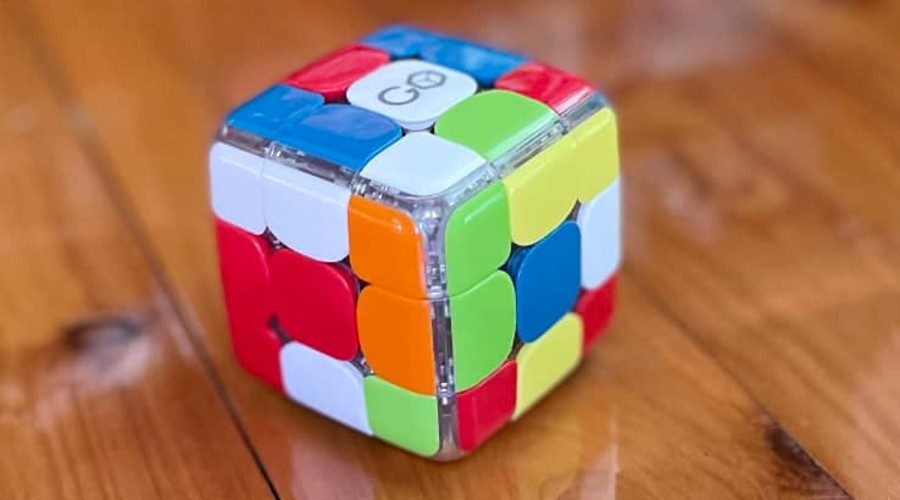 While the design of the GoCube utterly mimics the puzzle elements of the classic trademarked cube, it does have a few different design notes. The sides are more rounded with a clear threaded line that allows the internal lights to shine through the body of the GoCube where a classic Rubik's Cube has black sides and no internal lights.

Yes, I said lights because this is a cube puzzle that lights up and requires power to do so. It's not just a party trick either. With a nod to the fact that a good few years have passed since a Hungarian architectural professor came up with his puzzle idea back in 1974, the GoCube is also Bluetooth compatible. That's very much the point because this is a "smart" cube puzzle, which I'll get to shortly.

The GoCube itself is quite light, and if I have one criticism for something that's typically seen as a children's toy, it's that it is rather lightly put together compared to its brand name counterpart.

You can very easily stretch out the sides, and it wouldn't take much imagination to suggest that kids given a GoCube could break it without breaking a sweat. That lighter construction should make it a better prospect for speed cube solving if that's your thing, but then again it's not likely to be officially recognised if you do.

Aside from the GoCube itself, you also get a charging stand and cable to power up the GoCube and give it somewhere to live when it's not in use. The charging cable uses the typical pogo pins found on lots of cheaper fitness bands for connection, terminating in a USB-A type socket, but you'll have to provide power yourself. 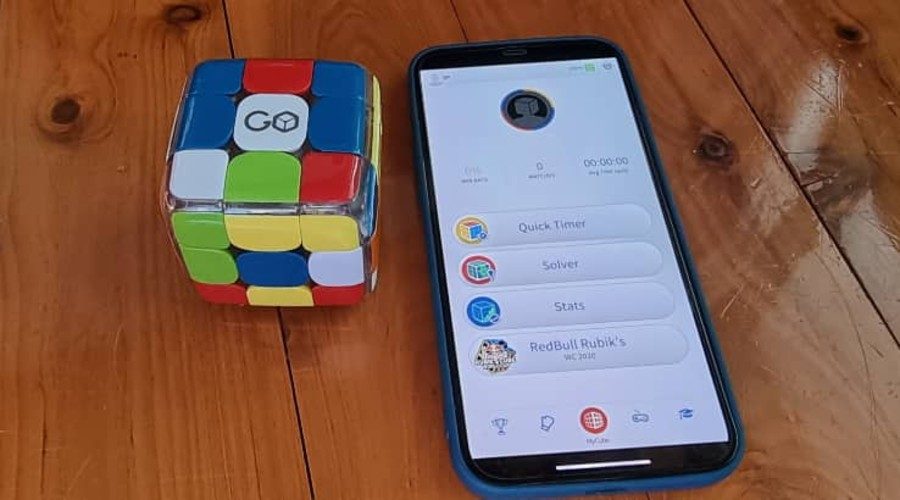 The big tech advancement that the GoCube brings to the cubing space is that it uses Bluetooth connectivity and an inbuilt gyroscope and accelerometer to accurately work out whatever its status is at a given point in time.

If you're wondering why that matters, it's because at its heart, the classic cube puzzle with the trademarked name is a mathematics puzzle. There's a core algorithm that can be used to solve the cube very quickly indeed if you know what you're doing. I've just looked it up, and the current rated world-solving record (albeit not on a GoCube) is some 3.47 seconds.

That's scary fast, and for most of us, the mysteries of that algorithm were always one part fascinating and one part frustrating. That's where the GoCube's knowledge of its status and the accompanying app can help.

Once you've set up an account and paired the cube, you can just use the inbuilt solver to walk you through getting it back to its pristine state if that's all you want. The odds are very good that the first time you do this, you'll be staring so intensely at the app rather than the cube that you're taken by surprise when the messed-up cube is somehow "magically" fixed in front of your eyes. 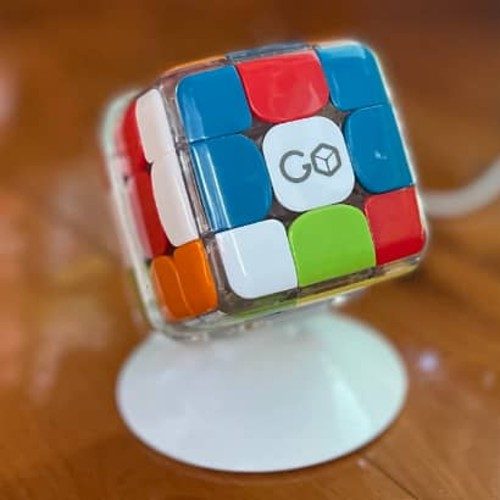 Frankly, at this price, just using the solver function would be a waste. What it can also do is teach you the underlying skill without having to stare at too many algorithms. It's probably not going to push you to the 3.47 seconds fast level, but everyone has to start somewhere.

The primary way it does this is via its solving academy, which steps you through the basic notation used and the way the algorithm can take a cube from any mixed state through to a fixed state with a set series of moves.

There's also a smattering of mini-games focused around the various ways you can twist the GoCube, with varying degrees of "fun". GoCube's take on Guitar Hero, for example, isn't particularly compelling. You're more likely to get drawn into competitively solving the GoCube online against other GoCube owners, vying for the best times possible. All of which naturally works to make you a better cube puzzle solver along the way.

Should you buy the GoCube? 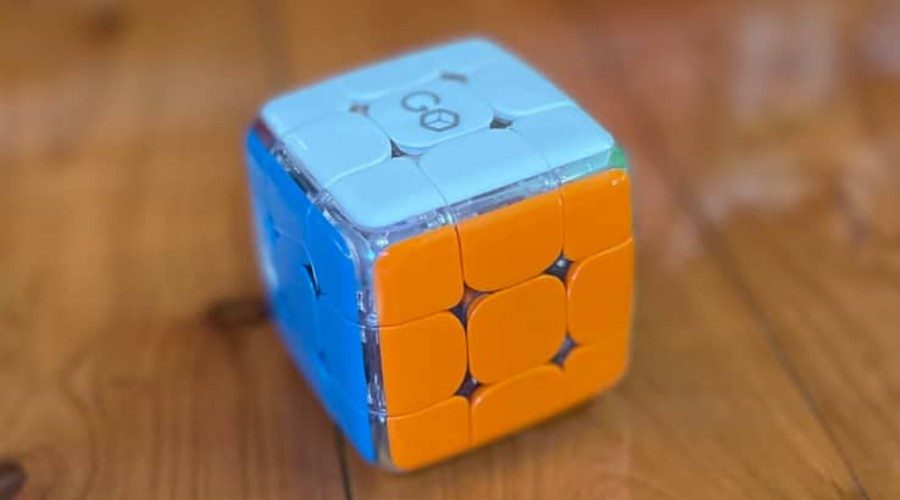 The underlying technology in the GoCube is pretty smart, and it's a good application of what can be done with a few simple sensors and some app programming.

If you've ever wanted to be able to solve the iconic cube to impress people… well, outside of the cubing circles, the GoCube can't guarantee that. But it can make you better at solving the cube puzzle over time with a little patience.

What you've got to weigh that against is the asking price. At $129, it's a pricey little cube, and even the official Rubik's Connected cube is a little less expensive at retail at the time of writing.

There are countless online tutorials and videos that can walk you through how the solution works and how to apply it to a given cube, although they're not quite as party-piece-attention-grabbing as the GoCube.