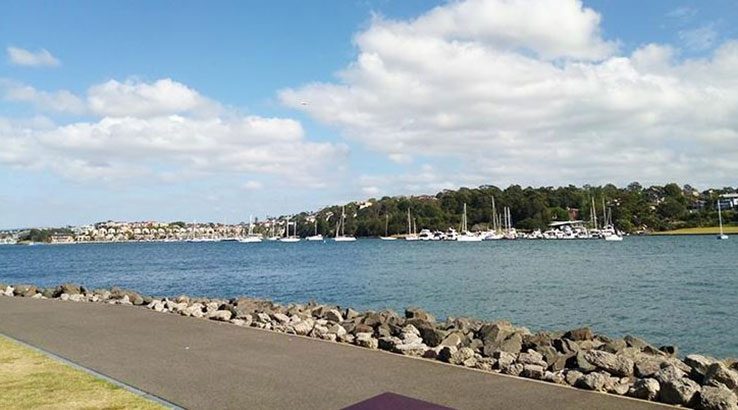 The view over Woolwich from my glamping tent

Because everybody deserves a little luxury sometimes.

A ray of light streams through my window onto my bed, warming the room and waking me up to the morning. Bleary-eyed, though well-slept, I creep to the edge of my room, unzip my tent and gaze upon unimpeded waterfront views, not metres from my front door.

I've just spent my night glamping for the first time on Cockatoo Island. And while I wouldn't liken the experience to a hotel stay, it's definitely a step up from camping that I'd be all too happy to do all over again.

For those unfamiliar with glamping, it's a portmanteau, or blend word, that means "glamorous camping" and it serves to bridge the divide between slumming it in a camping tent and shelling out for a hotel room by offering a luxurious bedroom set-up inside a tent.

It's an experience that's been cropping up more and more frequently across the world, and for those in Sydney, one of the closest and most accessible locations where yo can try it is on Cockatoo Island.

Just a 30-minute ferry ride from Circular Quay, you'll find this island nestled between Drummoyne, Birchgrove and Woolwich on the Parramatta River. It's tiny enough to wander around within a few hours (highly recommended) though large enough to be considered the biggest island in the harbour. 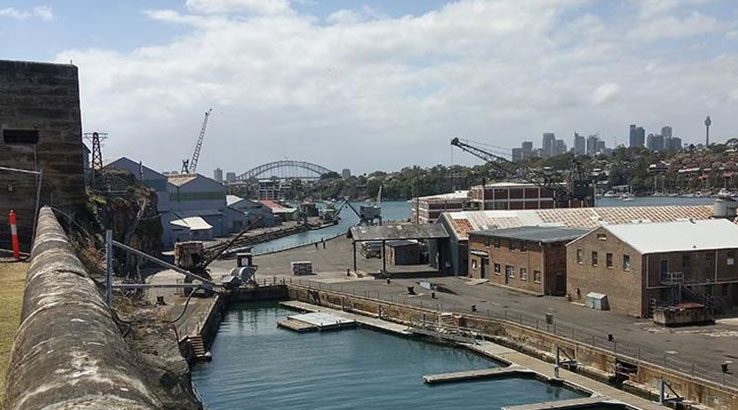 Cockatoo Island's shipyards and docks, with a view of the Harbour in the distance

As a UNESCO World Heritage Site, it's riddled with colonial and maritime history, having served as a prison, a dockyard and a shipbuilding facility in the past.

For those wanting to sleep under the stars in unique surrounds and wake up to pristine views, the island features three accommodation options.

The most affordable are the camping sites. These share the same grounds as the glamping tents, cost from $45 per night and are for the budget savvy who don't mind bringing and pitching their own tent.

Then there are the apartment and studio stays. These start at $250 per night and are aimed at those who'd prefer to stay comfortably in a homestead near the island's summit.

For a happy medium, there's glamping, which starts at $130 per night and is worth every cent for the view alone. 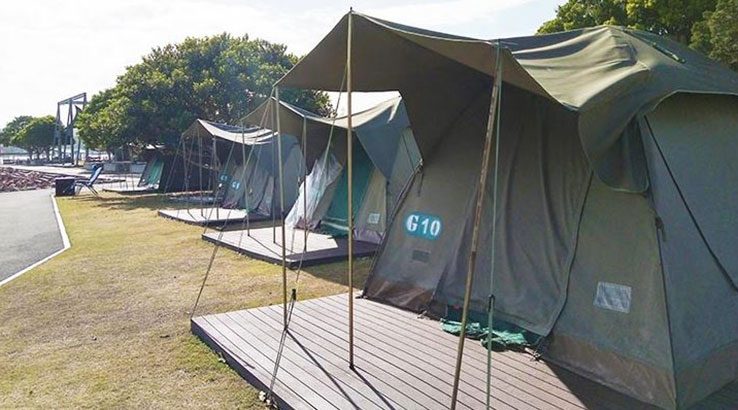 The line of glamping tents stretched along the waterfront]

Although the glamping tents share the same campground as the standard tents, they take up prime real estate by the edge of the water. And at $130 a night, this is more than a bargain considering Sydney's current housing situation. The tents are raised on a generous slab of decking with a porch space out the front where you can soak up the sun.

There's no need to "set up" or "pack down". The tents come pre-erected and the beds are pre-made and cleaned after you check out. And, as I unzipped my tent, I was surprised to discover a Mary Poppins bag full of treats.

Two beds are set within the tent, each made with clean bedding and pillows. A spare blanket is provided in case the night gets cold. Water bottles, towels and toiletries are also provided for those like me who forget to bring the important stuff with them.

Sadly, you still have to "campground it" in shared facilities if you wish to take a shower or go to the bathroom, but that's the camping life for ya.

Upon arrival, I'm also given a lantern so that I don't accidentally fall off the footpath and into the drink while trying to get to and from my tent at night. This can also be strapped to the roof of your tent as an overhead light. 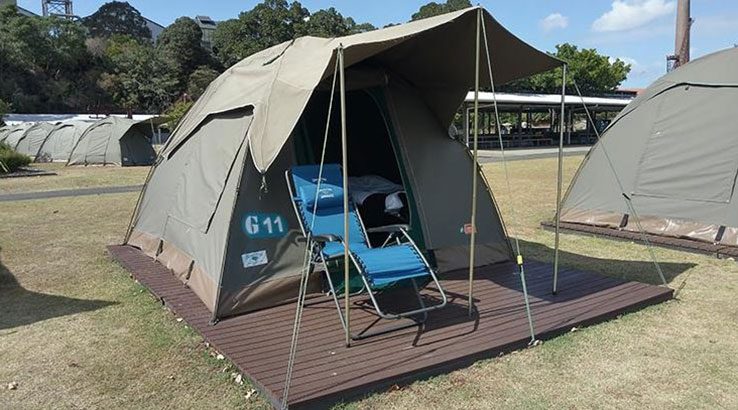 My home for the night

But the deck chairs are the real selling point here. A step up from those offered in the regular camping area, they're sturdy, adjustable and the peak of comfort. Set one up on your porch, soak up the sunshine and wave to the boats as they travel past, envious of your million-dollar views. It's the thing to do.

To book: Glamping, camping and apartment stays on Cockatoo Island can be booked online here. If you're looking to ring in the New Year in style, stays are also available for New Year's Eve at a premium.