Ready for Friends: The Reunion trivia? The 15 most important scenes to re-watch 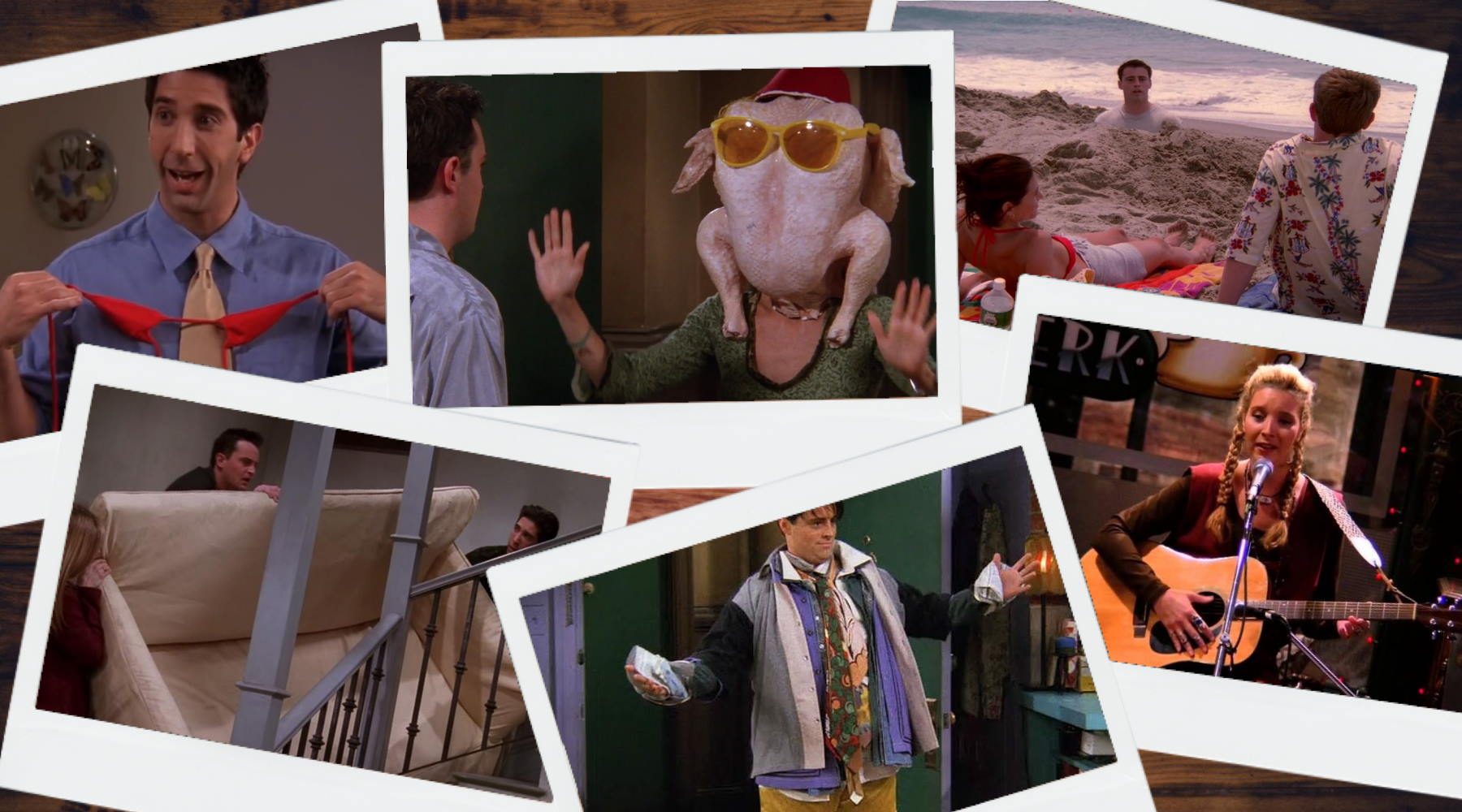 Brush up on your Friends knowledge ahead of the highly-anticipated reunion special.

Friends: The Reunion is just around the corner. You dusted off your Friends merchandise for the big day, purchased enough beer for the watch party and made sure you have a way to stream the TV special in style.

But how well do you remember the iconic sitcom, all these years later? Turns out, the six main cast members will test their Friends knowledge as well.

As seen in the trailer for the reunion special, Jennifer Aniston, Courteney Cox, Lisa Kudrow, Matt LeBlanc, Matthew Perry and David Schwimmer will play a round of trivia, with questions having something to do with arcs or scenes from the show. Like in the memorable episode that inspired the game, categories include Fears & Pet Peeves, Ancient History, Literature and It's All Relative.

If you're eager to play along, we highly suggest that you revisit some of the show's most noteworthy scenes – which may give you a welcome advantage when Schwimmer kicks off the lightning round. Don't have time for a proper Friends marathon? We've gathered everything you need below. Cue the laugh track.

The One Where Rachel Meets the Gang

If you don't want to re-watch the entire pilot episode, might we at least suggest the scene where Rachel enters the coffee shop and officially joins the gang? It's the first time we see the six friends together, so it's worth at least a couple of minutes of your time. It's from season 1, episode 1, The Pilot.

The One Where Joey Wears Chandler's Clothes

Joey steals Chandler's spot on Monica's comfy chair, causing an argument between them which eventually escalates to Joey wearing as many of Chandler's clothes as he can, while also going "commando". The scene is from season 3, episode 2, The One Where No One's Ready.

The One Where Ross and Rachel Break Up… Again

When Rachel decides she wants to get back together with Ross, she writes him a passionate letter in which she asks him to take responsibility for their break-up. Ross falls asleep reading it but takes responsibility anyway… until he doesn't. The scene is from season 4, episode 1, The One with the Jellyfish.

The One with the Jellyfish

Speaking of jellyfish, we couldn't skip over the hilarious adventures of Monica, Chandler, Joey and the mischievous jellyfish from the same episode. It turned out to be quite the traumatising event.

The One Where Monica Teaches Chandler About the Female Body

When Chandler doubts his ability to satisfy his new girlfriend Kathy in bed, Monica gives him some handy tips and teaches him that there are seven female erogenous zones, to surprising results. The scene is from season 4, episode 11, The One with Phoebe's Uterus.

The One Where the Girls Lose the Apartment

Also known as the scene that inspired the trivia game in the reunion special. When the girls bet that they know the boys better than vice-versa, a tough competition to determine the truth ensues. The stakes are high, the questions difficult, the acting stellar. From season 4, episode 12, The One with the Embryos.

The One Where Ross Says the Wrong Name

At the altar is really the worst place to say the wrong name, don't you agree? This history-making scene is from season 4, episodes 23 and 24, The One with Ross's Wedding.

The One with Monica's Turkey Head

As the main characters recall past Thanksgivings, Chandler realises that Monica severing his toe when they were younger wasn't quite as innocent as he thought. He gets upset, so Monica asks for forgiveness by doing a dance while wearing a turkey on her head. These two were clearly meant to be. From season 5, episode 8, The One With all the Thanksgivings.

The One Where Phoebe Finds Out

Monica and Chandler date in secret for a few months until they are ready to share the news with everyone. However, the gang eventually finds out about their romance – and Phoebe's reaction is one of the best. The scene is from season 5, episode 14, The One Where Everybody Finds Out.

The One Where They Have to Pivot

When Ross buys a new couch, he refuses to pay the exorbitant delivery fee and decides to carry the couch to his apartment with a little help from Rachel. However, getting the couch up the stairs turns out to be an ordeal. The scene is from season 5, episode 16, The One with the Cop.

The One with the Routine

Watch as Ross and Monica resurrect their silly high school dance routine for a New Year's Eve special. From season 6, episode 10, The One with the Routine.

The One Where Phoebe Sings Smelly Cat

Phoebe's songs are all over the place, but you have to agree that Smelly Cat is her biggest hit, at least as far as the show's fans are concerned. Watch a mash-up of her tunes to brush up on the lyrics.

The One Where Joey Pushes Ross into the Fridge

When Joey's fridge breaks, he can't afford to fix it on his own so he tries to convince his friends to contribute. While all the interactions are funny, Joey pushing Ross into the fridge takes the cake. From season 6, episode 19, The One with Joey's Fridge.

The One Where Ross Is Fine

When Ross sees Joey and Rachel kissing, he reacts poorly but insists that he is completely okay. To the point where he hosts probably the most awkward dinner party ever. The scenes are from season 10, episode 2, The One Where Ross Is Fine.

The One Where Rachel Gets Off the Plane

The Friends finale gave us plenty to cheer about, including a highly-anticipated Ross and Rachel reunion. Despite deciding to relocate to Paris for work, Rachel changes her mind and stays in New York with the father of her child. The scene is from season 10, episodes 17 and 18, The Last One.

Friends: The Reunion premieres Thursday, 27 May at 5:02pm AEST on BINGE and Foxtel. You can stream all seasons of Friends on BINGE, Foxtel and Netflix.