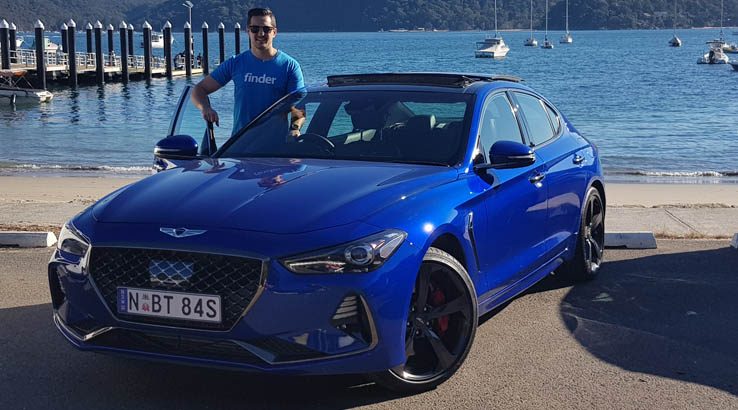 The Genesis of Genesis

Genesis has launched in Australia, bringing with it two premiere models to the Australian market: the performance focussed G70 and the limousine-esqe G80.

The South Korean manufacturer aims to be the leading producer of premium vehicles from the nation. Such is the company's confidence in its vehicles, it won't employ traditional salespeople in its "Studios", meaning there is no haggling over price. If you want a Genesis, this is the price. Don't like it? Go complain at Mercedes-Benz.

And while this hard-nosed stance may be off putting, Genesis is backing it up with a level of service never before seen in Australia. Owners get complimentary scheduled servicing up to 50,00km, a car collection and courtesy drop-off service, plus roadside assistance and mapping updates for five years, among other things.

All of this is great on paper, but if no one buys a car, it is all for nought.

I first saw the G70 at the Pitt Street Studio launch and thought it was appealing, although I was also acutely aware that the lighting in the company's renovated building was positioned with precision.

The more you look at it though, perfect lighting or not, the better it comes across. Its sporty stance and low profile make it fit to be every bit a 3-series competitor – at least visually.

At the back, you get hints of BMW and Mercedes, the brands from which Genesis is looking to take some market share.

Up front, with its sideways ''Y" configuration LED lights and mesh grille, the G70 looks quite splendid too. The "Mallorca Blue Metallic" particularly dazzles when paired with the dark chrome exterior package that the Sport model on-test benefits from. The package includes a Genesis "crest" grille, window frames and beltline, mirror base, door handles and what the company describes in its materials as a front bumper lower "garnish" – very tasty.

As a package, you can tell it isn't German, but it's up there. 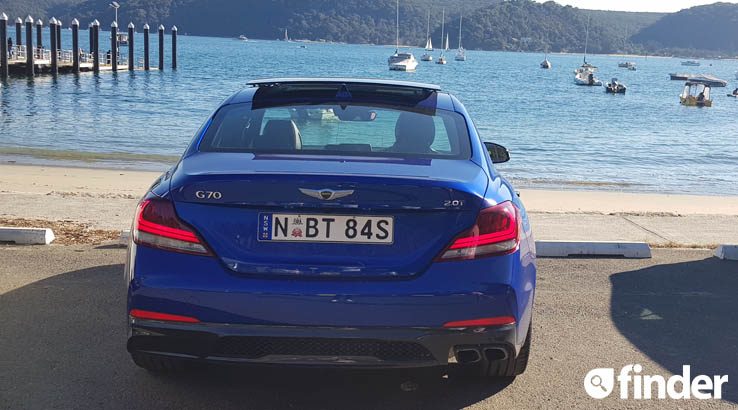 The 2.0-litre turbo petrol, which produces 179kW and 353Nm, is spliced to an eight-speed automatic. And while it will do the dash to 100 km/h in a brisk 5.9 seconds, the engine sounds like it is struggling higher in the rev-range. The exhaust note isn't all that fantastic and is amplified through the vehicle's audio system thanks to its "Active Sound Design" technology.

For everyday use, the combination is fairly good, but I think the 3.3L drivetrain is the one I would have. We were huge fans of that in the Kia Stinger and imagine, when matched with the dynamics of G70, it would be a tempting teaming. Hopefully, we can get behind the wheel soon and let you know.

When on windy roads, the G70 gives you plenty of confidence. The high-performance dampers and sticky Michelin PILOT SPORT 4 tyres do their bit to create an engaging drive. The vehicle feels planted and body roll is kept well in check, while the bright red Brembo brakes make sure you can cut speed efficiently before cornering.

Genesis has spent countless hours tuning the suspension of the vehicle to adhere to our roads as best they can. The suspension endured thousands of kilometres of what Australia threw at it and the results were pleasing.

There is plenty of tech to keep passengers safe as well. Standard on the base model, you get driver attention warning, blind-spot monitoring, forward collision avoidance, lane keep assist, rear-cross traffic alert and adaptive cruise control with stop and go.

You can tell the Genesis G70 is aiming to play in the premium market when looking at the interior. The leather interior with its quilted pattern and coloured stitching, in our case grey, looks high quality. The front seats are comfortable and are heated, plus they are 12-way adjustable while also including 4-way lumbar adjustment – all features that help position it well against its competitors.

You can charge your phone via any of the two USB ports in the front, or the wireless charging bay under the central command unit. You are going to need to share these two USB ports with the kids in the back though as there aren't any for rear passengers.

I say kids because once you start getting close to the six-foot mark, the back seats become more cramped. With the driver seat adjusted for a person of average height, a similarly tall rear occupant will have to put their legs on either side of the seat back.

Included are all the usual creature comforts, two cup holders in the front and two in the back in addition to door storage bins with bottle holders and dual-zone climate control.

Interestingly, there are signs of the vehicle's Hyundai origins. The eight-inch infotainment system comes straight from the Hyundai shared-parts bin. I would have loved for the interface to be at least skinned differently in order to carry the upmarket tone.

Sound is delivered through a nine-speaker sound system, which is crisp and as mentioned earlier, helps to amplify the engine note.

Hyundai's infotainment system does the job. It is intuitive and easy to use, but lacks the premium feel of, say, a Range Rover. The voice assistant will also only work if you have your phone plugged in for either Android Auto or Apple CarPlay, so it can use either Siri or Google Assistant.

One annoyance I found was when resting the arm on the doorsill while driving, the B-column is in a position that becomes uncomfortable. This is only going to be an issue if you are six foot or over, but worth noting if you take it for a test drive. I can also see it being a slight issue when checking your blind-spot; however, blind-spot monitors do help.

You can see thought and attention to detail has been given to the interior. There is knurling around the cup holders in the back, furthering a premium feel, as well as coat hooks on the B-pillar. 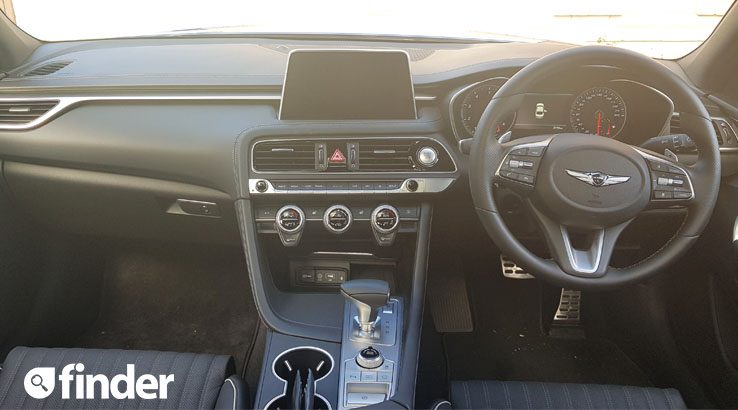 The boot is long and wide but somewhat shallow, I was surprised to see that it only holds around 330 litres as at first glance it seemed larger than this. As is convention, you can also fold down the rear seats for extra space.

There is a space-saver tyre, but given how shallow the boot is, I wonder if this could have been a full spare?

A first aid kit, warning triangles and a roadside assistance kit are also present. They're a nice addition should you find yourself in a sticky situation.

There are also two ISOFIX mounting points in the back as well as three top tether points.

The Genesis G70 2.0T is a stellar first attempt from the fledgling brand. Keep in mind if you are looking at a Genesis, there are a range of after sales services that make the brand a compelling, stand-out option.

In the not so distant future, I can see the big three German executive brands anxiously looking over their shoulders.