Find out how a power of attorney document could help you to manage your assets in Tasmania.

A general power of attorney can free you from financial burdens by appointing someone else to manage your affairs. This can be done for a number of reasons, for example, if you start living overseas and would find it difficult to manage your legal requirements at home. The appointment of the attorney is different for each state and depends on its legislation.

The document is pretty straightforward, but to know what to include and note include, we've written this guide.

What is a general power of attorney?

A general power of attorney is a legal document that lets an individual (the donor) appoint another individual or individuals (the attorney) to make financial decisions on their behalf. The donor or the principal can select more than one attorney.

The document lets the attorneys make financial decisions on someone's behalf while they are going overseas or are otherwise unable to manage their own affairs.

The document is only valid for a specified period and needs to be acknowledged by a witness. Generally, an attorney is a trusted friend or family who is not financially dependent on the principal.

The general power of attorney is covered under Section 18 of Powers of Attorney act of 2000 (Tas). 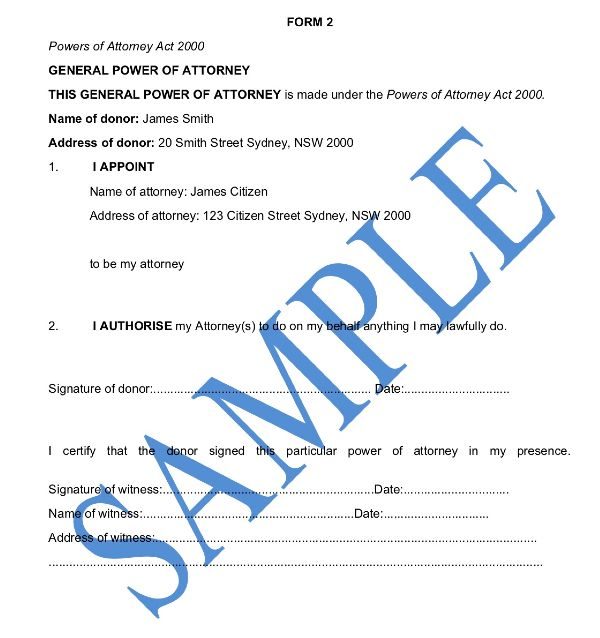 When should I use a general power of attorney?

A general power of attorney is used when the principal wants to appoint an attorney and have them manage their financial decisions. These decisions include selling or renting of property, managing their bank accounts and handling other investments on behalf of the principal.

The principal can also use the document when they are going overseas and want to appoint someone to look after their property, bills, investments and other financial prospects.

There are two major types of power of attorneys: general and enduring. The main differences between them are the period that they're valid and the extent of power given to the attorney. For both types, the principal must be capable of making decisions when signing the document.

The enduring power of attorney is a legal document where the principal or the donor appoints an attorney to make decisions on their behalf when they no longer have the capacity. These decisions are related to financial, personal and other health issues.

The principal often appoints an enduring power of attorney when they are reaching old age. This document is effective as soon as it is signed or after a specific occasion or time. This is mentioned in the document.

What does a general power of attorney document include and not include?

A general power of attorney document typically includes provisions specifying the extent of power given to the attorney.

How effective is a general power of attorney document?

Once signed by the principal, attorney and the witness, the document comes into effect. It is now a formal legal document that can be upheld in court in case of a dispute or other reasons.

A general power of attorney will not be effective in Tasmania if it's found the donor was not of sound mind when it was signed or other requirements were not followed.

Do I need a lawyer for a general power of attorney document?

A power of attorney is a simple document that may not require the services of a lawyer. However, as it can involve big financial decisions, especially in cases of land transactions, you might want to get the document checked by a lawyer. It may also a good idea to have a lawyer as a witness when the document involves buying or selling or assets.

How do I write a general power of attorney document?

The document needs to be written clearly and concisely and is usually written by the principal. The government of Tasmania advises its residents to download the form from its website to avoid any mistakes. However, if you are keen on writing the form, it should include the details of the powers that can be exercised by the attorney. It should also include the validity period of the document. For reference, see the templates as a guide.

Sheetal Singh is a writer at Finder. She is a graduate with Double Masters in International Relations and Journalism from Monash University. When Sheetal is not writing, she loves to paint and travel.