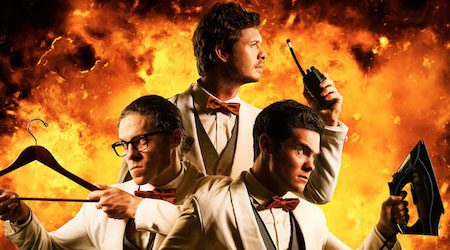 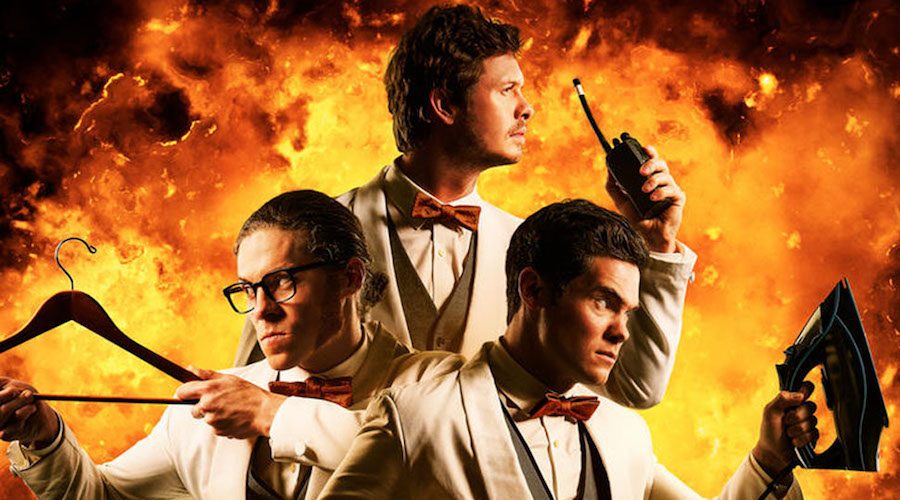 Game Over, Man! is what would happen if you tried to do a contemporary reboot of the Three Stooges with 100% more male frontal nudity, gross-out moments and subliminal Mountain Dew advertising. In Game Over, Man!, an idiotic trio of hotel maids try to pitch a blaxploitation video game to a VIP house guest – the cashed-up and utterly shameless Insta-king known as Bey of Tunisia (Utkarsh Ambudkar). Against all odds, this unlikeliest of elevator pitches gains traction but is derailed by a Die Hard-style takeover that forces the Dew'd Crew [sigh] to turn to guerrilla tactics.

Cue one hour and forty minutes of the former Workaholics comedians evading a pack of killers, narrowly avoiding bullets by the providence that protects idiots, salvia addicts and man-children. Alexxx (Adam DeVine) is their Moe, a self-described Rick Ross of the tripod whose solution to any problem typically involves whipping out his junk. Darren (Anders Holm) is the ideas man who can be counted on to get high and gurgle like a paralytic Wookiee when the chips are really down. Last but not least is the gun-phobic Joel (Blake Anderson), the undisputed MacGyver of this triumvirate whose closeted nature is obvious to everybody but himself.

Living a soul-destroying existence of being constantly hassled by seedy hotel manager Mitch (Daniel Stern), the Crew is fed up with having to clear the champagne bottles and the numerous used condoms of more successful people. The only thing standing between them making their patented “Skintendo” gaming system – and a life wearing diamonds, collecting albino pythons and dating Raya – is a bunch of beefy mercs led by the steely-eyed sociopath Conrad (Neal McDonough). This evil albino's goal is to siphon half a billion of The Bey's dollars, and until that's forthcoming, he's more than OK with murdering extras and cameo-making minor celebrities with explosive neck collars.

A bunch of zeroes forced to become action heroes may sound like a solid premise, but as The Level Hotel becomes riddled with bullet holes and pop culture references, there's an inordinate amount of joke misfires as well. Now that the Workaholics are unshackled by the basic censorship of Comedy Central, vulgarity is the go-to here as opposed to tightly-written comedy. More oversight needed to be placed on this production – there's a sense that no objective outsider was on hand to identify which recurring jokes weren't hitting their marks and when the Dew'd Crew ought to pull back on the incessant bickering and screeching. 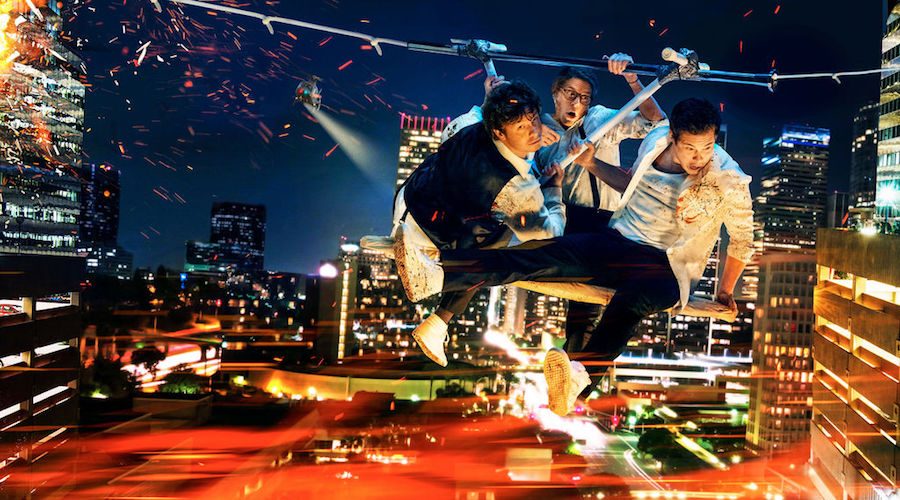 That's not to say there aren't some laugh out loud moments. Ambudkar's Bey is consistently amusing as the obnoxious social media jerk who confounds his captors by wholeheartedly embracing their attempts to embarrass him. The fractious nature of the bad guys is a source of amusement too, thanks to poorly-timed, inter-employee workplace shaftings (both figurative and literal). Speaking of poor teamwork, the Crew themselves do get into a ludicrous, strictly non-lethal gun battle, too.

Unfortunately, you have to slog through a lot of filler to reach these gems. Comedy is always going to be a subjective thing, but for most folks, I'd say screenwriter Holm pushes the envelope too far too often. The odd gross-out moment is always worth an inclusion, but there's a lot of overreaching here in the form of genital-severing gore and animal cruelty. There are also some dead notes struck when Game Over, Man! underutilises its cameo moments, of which there are quite a few. For those of you playing B-lister bingo at home, you can expect to spot Shaggy, Sugar Lyn Beard, Fred Armisen, Joel McHale, Flying Lotus, Steve-O and Chris Pontius.

In the end, what we have here is a lop-sided comedy that feels far too underdeveloped in some places and outright stale in others, thanks to a reliance on mid-Noughties humour. For many viewers, gay panic moments, forced anilingus and industrial meat slicers being used on faces won't be seen as a side-splitting time. Even if you are into an edgier brand of humour than most, Game Over, Man! is hamstrung by unsympathetic characters and fairly charmless performances across the board. Heck, in many moments I found myself rooting not for the influencer, his 106 captured sycophants and the Dew'ds, but for the bad guys themselves.

There's just not a lot to bro-fist about when it comes to Game Over, Man! It's a forgettable effort whose misguided hijinks aren't hi-score table material. Worse, it ends with the suggestion of a sequel called Game Overboard! Netflix would be mad to insert coin into such a venture.