Forging the future of cancer treatment 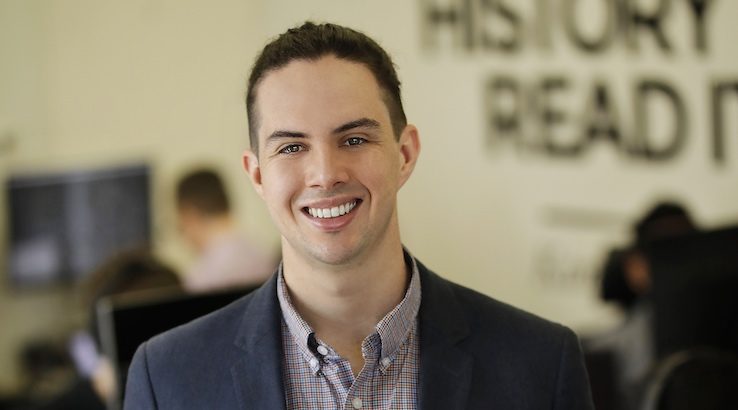 This young CEO is looking to use AI to save lives.

There are few two-letter words that can conjure up as much intrigue, or derision, as AI (artificial intelligence). For Elliot Smith, the 27-year-old CEO and co-founder of Australian medical startup Maxwell Plus, AI is the key to a potential revolution in the way we detect and diagnose cancer.

Using technology developed by Smith himself, the Brisbane-based company uses AI algorithms to analyse patient data, including medical imaging and blood samples, and to search for factors that may indicate the presence of cancer. The technology has the potential to transform the lives of millions currently at risk of cancer as well as improve the quality of life of those already living with the disease.

"I've had too many people I know be told 'if only we'd caught this earlier'."

Back in 2016, having recently completed his PhD (researching how to design MRIs so they could be paired with radiation therapy and better target cancerous cells), Smith found himself at somewhat of a career crossroads.

"It was a really interesting project, but I had decided that academia was not really my calling. I wanted to be in the space where great things like that could get in the hands of people very, very quickly. So I took what I knew, which was medical imaging, and how to design and simulate complex medical scenarios, and thought, 'where can I apply this today?'." he told Finder.

A conversation with Australian entrepreneur Steve Baxter prompted Smith to consider cancer treatment as the best use of his time and research. "He told me, 'look, I've had too many people I know be told "if only we'd caught this earlier",' and I wanted those conversations to go away."

"But digging deeper into why that happened, it turned out to be a problem analysing data. If there was ever a clearer sign than that, I don't know what it would be. So I thought, 'how can I take what I know about medical data and medical imaging and apply it to making sure that prostate cancer becomes effectively a solved problem?'."

As the most commonly diagnosed cancer among males, affecting one in seven Australian men, prostate cancer seemed a logical test case for Smith's technology. Over the last two and a half years, he has dedicated Maxwell Plus's AI technology to helping diagnose prostate cancer as accurately and early as possible.

"We've got a solution today that allows men to join a digital clinic and start getting tested for prostate cancer. And behind the scenes, they're connected with a team of dedicated prostate cancer clinicians that could use artificial intelligence to better analyse that data, better assess patient risk and better manage that patient through that pathway.

"If men are detected at stage one, when the cancer is a single lump or isolated lesion, the five-year survival rate is 99.8%. But if you're caught later than stage two, that survival rate drops to about 26%. Ultimately, what we're aiming to achieve is that every man that ends up with prostate cancer is diagnosed early enough that all options are in front of him, and that men that don't have it don't go through unnecessary testing."

"By no means is anyone here to take your job."

Following initial angel investment, Maxwell Plus went through the Muru-D/RCL accelerator in Brisbane in late 2016. In 2017, the startup raised $3.4 million in a seed round of investment led by Main Sequence Ventures, a fund originally financed by money from the CSIRO for the Wi-Fi patent. This money allowed Smith to expand the company from four people to twenty and to see it grow out of co-working space into its own office.

While Maxwell Plus has managed to successfully navigate the worlds of funding grants and venture capital, the unique positioning of the company presented its own problems. "I think medical technology has its own challenges, especially some of the stuff we saw around fundraising. When we went to the traditional tech startup VCs, we were too medical for them. And we'd go to the traditional medical VCs and we were too tech for them.

"So we sat in this interesting middle ground where we're medical technology, but not a pharmaceutical, and we're not an app that you can spin out to 100,000 people just by dropping a lot of money on Facebook ads," he said.

"So it took us quite a lot of time to really find the right partners and the right investors to really understand what we're doing and why it was so important." Convincing financiers was only half the battle, and Smith found resistance to the technology itself was another hurdle to overcome.

"One of the interesting things about our space is that AI, especially in the medical field, is quite new. Not only do we have to build the product and make it really great, but we have to get it in front of clinicians that are being told, incorrectly by people, that AI is here to take their jobs. So we have to re-educate the market to say, 'by no means is anyone here to take your job, we're just giving you new tools and news technologies to empower you to do more'."

"It's not just crackpots who have weird, wacky ideas."

Having previously founded another startup in the years before Maxwell Plus, Smith believes the local startup scene has grown immeasurably since then. "It's been about eight years since my original startup and so much has changed in that time. It's just a completely different conversation.

"There was really nothing around the last time around, and now the support and startup hubs that are in pretty much every capital city, the availability of capital, the fact that there's startup media in this country, I think is a huge sign that startups are a recognised pathway to business. It's a real career, not just crackpots who have weird, wacky ideas. Sure, there's maybe more that we can do, but I think the key for me is just reflecting on how far we've come," he said.

Now a relative veteran of the local startup sector, Smith says Australia is making up for lost time in establishing itself in the global startup community. "I think historically, yes [Australia was slow to adopt startups], but recently it's become a lot more at the forefront. There's a lot of Australian startups today that are on the world stage. We're not just a tiny little island at the bottom of the world anymore.

"Australia is a viable place to start a business and grow a business. There's a lot of challenge here and a lot of great ideas, and we're playing the game alongside all of those traditional startup hubs, which I think is really excellent to see."

Time to get onboard

Maxwell Plus has received approval as a medical device in New Zealand and has applied for the same in Australia and Europe. It also plans to expand into treatment for other forms of cancer, as well as neurodegenerative diseases such as Alzheimer's.

But for now, Smith is hoping that Maxwell Plus can start making a difference. "It's really about getting the message out there to as many men aged 40 and above that you can sign up right now anywhere in Australia, get on board and start to understand your risk of prostate cancer. For us, it's about taking this product that we've put our heart into over the last two and a half years and taking it out to the world and saying, 'look, it's here, we built this for you and it's really time to get onboard'."