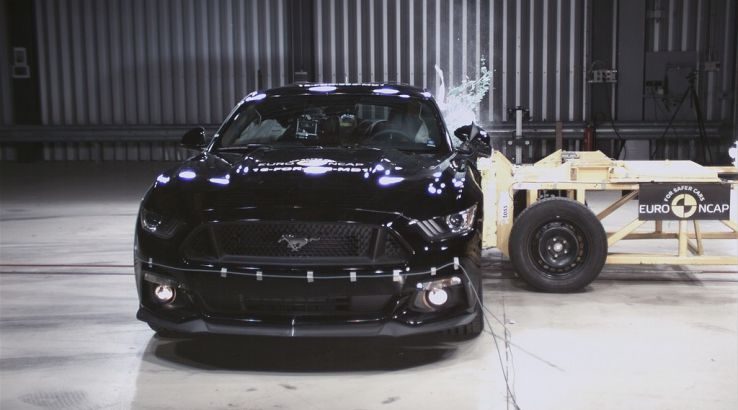 The Australian crash testing authority, ANCAP, has given the Ford Mustang a 3-star crash rating.

For December 2017 models onwards, the Mustang now carries a 3-star crash rating. It previously it held a 2-star score.

Ford revised the Mustang to improve the muscle car’s crash safety. Currently, the Mustang is the world’s (and Australia's) best selling sports car.

What did Ford improve?

“Improvements have been made to the Mustang’s Safety Assist features as well as tuning to restraint systems.”

After these new additions, ANCAP boosted the Safety Assist category score from 16% to 61%. The Mustang’s Pedestrian Protection rank also increased from 64% to 78%. The rating applies to 5.0-litre V8 models and 2.3 EcoBoost engined fastback models. ANCAP did not test convertible Mustangs.

Why the low score then?

Why did ANCAP evaluate Ford’s pony car as only a 3-star in crash testing then? Because, as Goodwin explains, Ford made no structural changes to the body. The car still falls down in two critical crash-testing criteria.

“Structurally however, the revised Ford Mustang is identical to the Mustang we originally rated, meaning it still falls short of our expectations in the areas of Adult Occupant and Child Occupant Protection,” Goodwin wrote.

Testers saw the inclusion of smart driving assists and safety features as an improvement. However, Goodwin said these did not reduce the “injury risk posed to rear seat occupants” or improve “whiplash protection”.

The new Mustang was given a 72% score for Adult Occupant Protection. It appears as though ANCAP did not repeat full frontal crash testing, but instead re-used the previous model’s scores. Rear passenger protection is where the Mustang lost points, delivering only poor/weak protection for the head, chest and pelvis. The Mustang was also marked down for whiplash protection, receiving 1.21 out of 3.

Additionally, Child Occupant Protection in the rear seats negatively impacted the overall safety evaluation, with 32% or 15.79 out of 49.

Ford fitted the Mustang with an active bonnet, which detects if the car hits a pedestrian and raises the bonnet away from solid components like the engine. The system worked well, but it failed to protect pedestrian pelvic regions.

The Mustang is one of the ultimate thrills to drive, with powerful engine options and fun inclusions like burnout mode. Compare Ford Mustang finance deals here. Buyers of a Ford Ranger or Everest can sign up to use a Mustang for two weeks under the Ford 2nd Car program.