A clandestine fitness tracker that's design more closely resembles that of a classic pedometer; the Fitbit One can be hidden away in your pocket, on your belt or clipped to your bra. 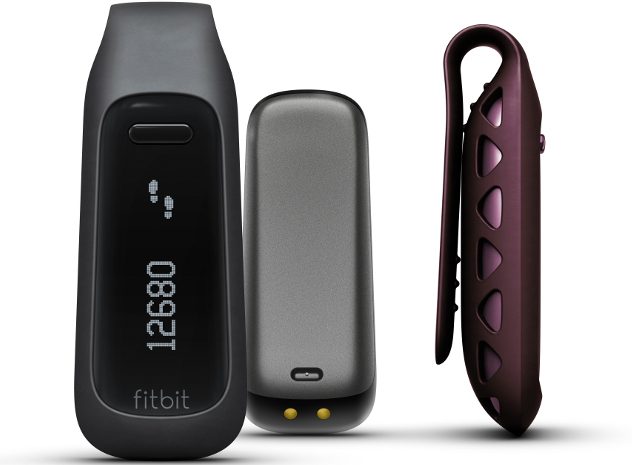 It’s no doubt that wrist-worn wearables have exploded in popularity over the last few years. While serving their ultimate purpose as a fitness companion, many models are made to be paraded about– for lack of a better term, a fashion statement. But, many of us consider the quest for better health a more personal, more private matter. It’s for these people the Fitbit One exists.

Though the design differs from what has become commonplace for fitness trackers, the Fitbit One still offers the same bevvy of features as other low-tier wearables. It uses an accelerometer and an altimeter to track your steps and stairs climbed and logs distance travelled and calories burned. Like most others of around the same price it will track your sleep patterns of a night, and can have an alarm set that gently vibrates on your wrist when it’s time to face the day.

Don’t let its size fool you, because the small but vibrant OLED display is capable of delivering a range of statistics when you’re on the go. With its one button control, the One cycles between steps, distance, calories burned, floors climbed, and the time. There’s also a cute little flower animation that grows in light of your recent physical activity. It’s gamification at its most basic. Hit your goals and the flower grows– a quaint, but effective impetus to help you hit your targets.

The display might just be the One’s greatest feature. For the same price as the Flex, you can do a whole lot more with the device itself. Even just the simple things, like checking the time, negate the need for a second device when exercising. Sure, there is always much more information to be found within the Fitbit app, but the One also stores your information for up to 7 days, just in case you forget to sync it with your smart device.

Its design is a marked improvement from its predecessor, Fitbit Ultra, and it exchanges the singular unit design, for a central unit with detachable clip. This is especially handy when switching between the clip and the packaged ‘sleep wristband’ at the end of the day. The Fitbit One measures in at 48 mm by 19.3 mm and weighs a mere 8 grams. Though it’s meant to be a discrete device, its basic pedometer shape does sacrifice some of the visual flair other wearables offer. The Ultra’s vibrant blue and plum colors are slightly missed, as the One only comes in black and burgundy, but again, the One is meant to be a discrete device, so the inferior design doesn’t really diminish its quality.

The Fitbit One is ready to use out of the box. But, you’re going to want to go through the initial syncing as soon as possible. It’s pretty straightforward, but newcomers will likely run into a few road bumps along the way.

The device comes with a USB base station, connecting your One to your computer via this device will begin a small download for the initial sync and then guide you to the Fitbit website where you will be asked to enter your basic personal information (age, weight, height etc.) This hub is also where you can customize goals and preferences and set alarms and reminders, so it’s worth getting acquainted with. After that the One can be synced to just about every device wirelessly over Bluetooth.

The One is compatible with iOS, most Android devices and wait for it… some Windows phones (well, it’s a start). Yes, the Fitbit app joins a very small crowd in the Windows Store. So, you can enjoy the benefits of Fitbit’s helpful app even if you are a Nokia diehard.

For such a small package, the Fitbit One is a versatile little device. It offers all the trimmings of a premium device in a tiny, modest package. Even though this device appeals to a more humble crowd, it is strange that Fitbit decided to limit the colour range. It would also be nice if the packaged wristband were more suited for rougher activities so users at least had the option to wear their fitness tracker with pride if they so desired. All in all, though, the Fitbit One is

Pick up the Fitbit Ionic from Rebel Sport and start tracking all aspects of your health with the first real Fitbit smartwatch.

Compare Wear OS smartwatches Compare Fitbit wearables: How to choose the right Fitbit for you

How to stream 2020 NRL trials live and free

Never miss another try with our guide to NRL streaming.

The third and deciding match in the Australia vs South Africa T20I series is here. Finder has the details on how to watch live.

How to watch LA Lakers vs New Orleans Pelicans: LeBron vs Zion live

LeBron James vs Zion Williamson: who will win?

There's nothing more Aussie than sitting with a Four'N Twenty meat pie to watch the AFL. Here's where you can catch it online in Australia.