One of the key benefits of being a Qantas Frequent Flyer member is that you can use your points to redeem first class seats with partner airlines.

All of these first class seats can be booked online through the Qantas Frequent Flyer platform. As these seats are more sought after than regular economy and business class seats, it may be harder to find available seats. The best tip to combat this is to book as early as possible. Remember that the higher your status, the more/earlier seats will be released.

Finally, note that some of the seats pictured may vary depending on the aircraft and route. Not every route will offer first class as many airlines focus on business class instead.

Without further ado, here are some of the first class seats you can book with Qantas Points: 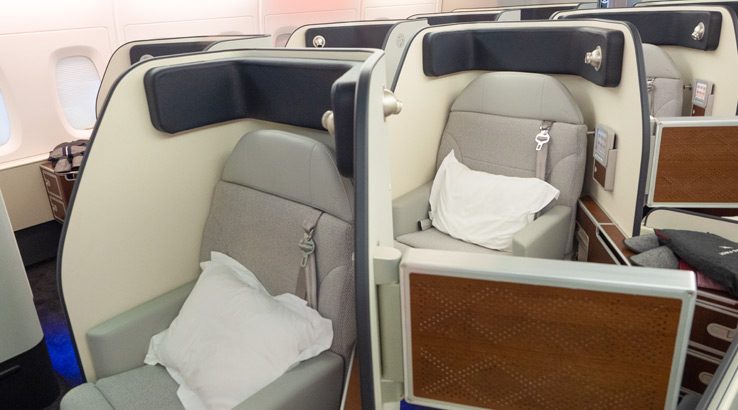 Qantas first class seats are available on the airline's A380 aircraft servicing routes from Sydney and Melbourne to London as well as a number of locations in North America and Asia.

The experience starts in the world-renowned First Lounge in either Sydney or Melbourne, both of which have menus inspired by Neil Perry's Rockpool restaurant. Frequent flyer favourites include the deconstructed pavlova and the salt and pepper squid. The lounge visit also includes a 20-minute complimentary spa treatment before the flight.

Onboard, the seats have received a recent update, and the new onboard lounge for first and business classes has also been refurbished. 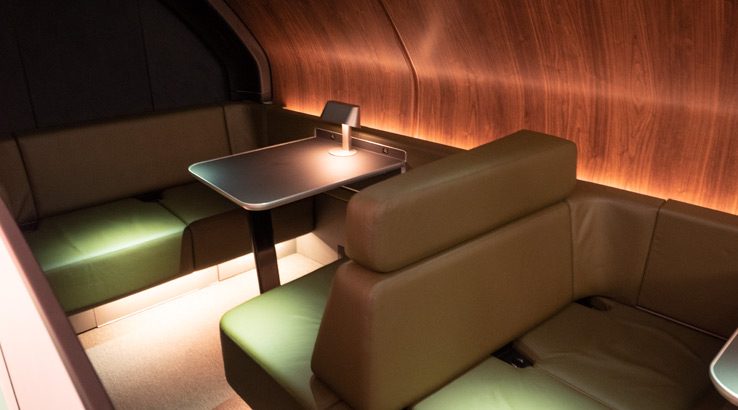 The updated A380 onboard lounge 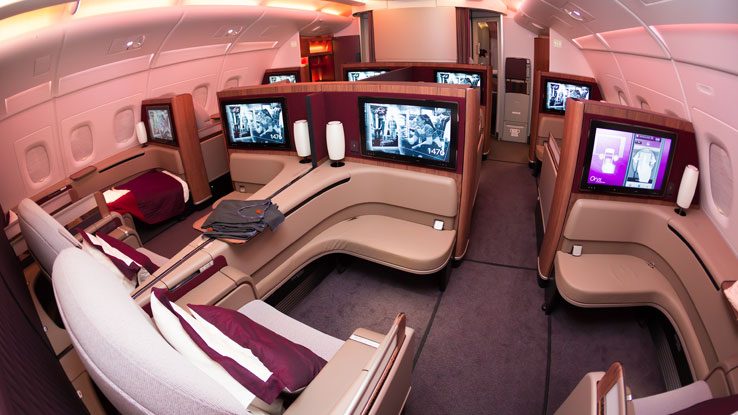 The seats come with loads of legroom and space, even if they're not very private. The inflight meals and beverages are top-notch, with premium champagne served onboard.

A standout part of this experience is the onboard bar, which is widely viewed as one of the best onboard any current aircraft. The Al Safwa lounge in Doha is also a must-see lounge with grand high-ceilings and both a-la-carte and buffet dining. 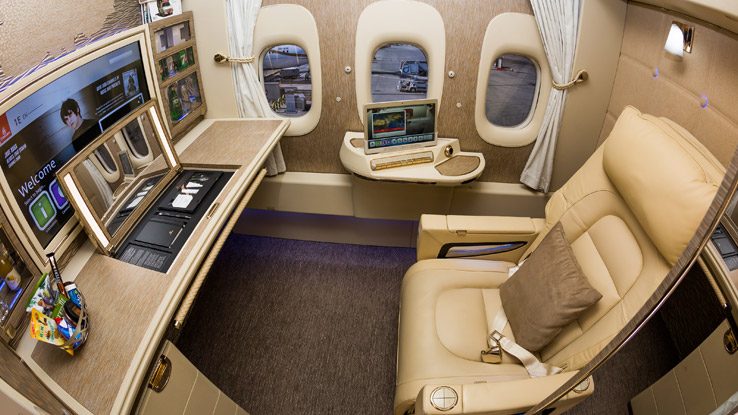 Emirates' new first class on the 777

Emirates has some of the most opulent and well-known first class seats available. There are currently two versions available: the original first class seats on its A380 fleet and the new fully-enclosed "Private Suites" being rolled out on Emirates' 777 fleet.

The seats are both grand and feature typical Emirates' styling. On the A380, this also extends to the iconic onboard bar and shower. Both seats are very private and include a minibar and luxurious dining and beverage menus with caviar service and champagne. 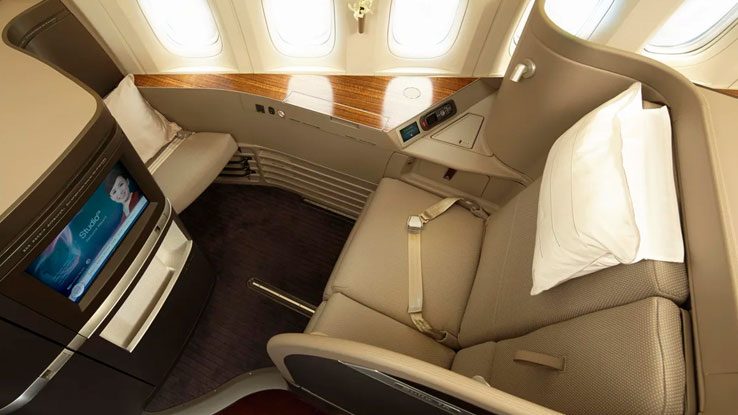 Cathay Pacific's first class seats aren't as opulent as the other options on this list but still have some great features. The seats are very wide and private, and they also include a caviar service, an 18.5-inch HD screen and an Aesop amenity kit.

A first class ticket also offers access to the amazing first class Pier (and business class Deck) lounges in Hong Kong airport, which consists of The Bar, The Dining Room, day suites and The Retreat, which is a spa centre. So make sure your booking gives you enough time to enjoy these on-the-ground perks. 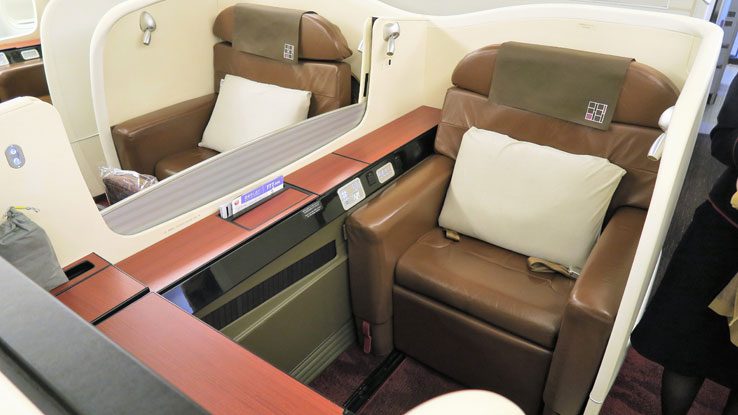 Japan Airlines' first class suite makes up for its lack of bold styling and opulence with its standout meal service, consisting of an eight-course Japanese menu designed by Michelin-star chefs.

The seats have brown leather and wood styling, with Bose noise-cancelling headphones provided to every passenger and a 23-inch touchscreen for entertainment. 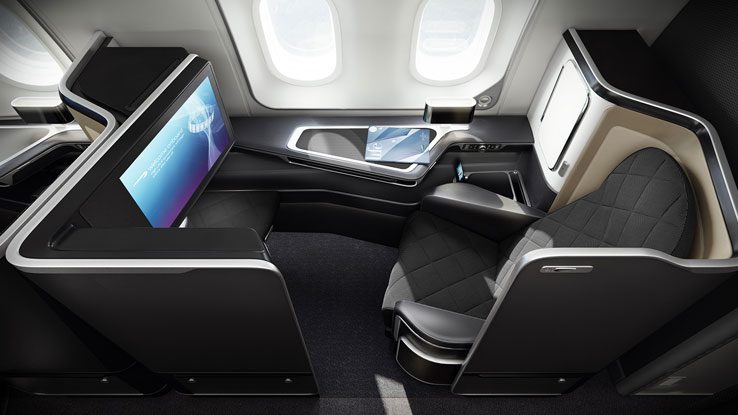 British Airways' first class seats run on a number of aircraft, including the A380 and 777. There are also updated seats on the 787-9 aircraft.

First class on British Airways isn't as flashy as the first class seats on Emirates or (non-Qantas partner) Singapore Airlines, but there are still premium food and beverages offered.

In addition to the onboard experience, British Airways also offers The First Wing at Heathrow airport. This is a dedicated check-in and security screening area for first class passengers and high status flyers. There's also the exclusive Concorde Room lounge in both Heathrow and JFK airports.

You can book these first class seats through the Qantas Frequent Flyer program online.

Many credit card offers earn Qantas Points for purchases, and some even offer a large amount of Qantas points as a sign-up bonus. These can help when trying to book a first class flight with Qantas Points. You can compare options below.

First class flying experiences are very attainable with the right number of Qantas Points and some forward planning. Read our first class flight reviews for more information about what is worth the points.

Marc Terrano is a lead publisher and growth marketer at Finder. He has previously worked at Finder as a publisher for frequent flyer points and home loans, and as a writer, podcast host and content marketer. Marc has a Bachelor of Communications (Journalism) from the University of Technology Sydney. He’s passionate about creating honest and simple reviews and comparisons to help everyone get value for money.

Optus is joining flybuys Interactive: How late will my flight be?