What fintech companies really think about partnering with banks 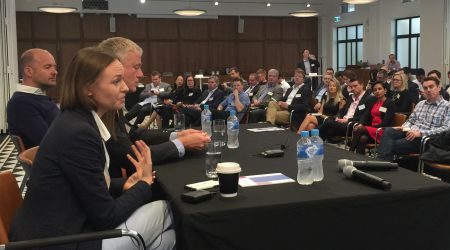 Panellists at Sydney's Fintech Summit debated the value of partnerships in the fintech market.

Partnering with banks was the topic of a much-contented discussion between three fintech companies at the third Fintech Summit, held in Sydney yesterday. While it's becoming a commonly held belief that partnering with a bank is good for fintechs, the panel revealed that this is not always the case.

"I fear the inclination to huddle up and think problems involved with scaling up and funding will be solved by partnering with a financial institution," said Jost Stollman, executive director of Tyro Payments at the event.

Stollman went on to say that while there is no easy answer to fintechs "cuddling up" to banks and large financial instutitions, he was "trying to encourage (fintechs) to rethink banking and financial services and how we can really disrupt and really compete."

"For us, partnerships are crucial," said Oleinikova. Persello recently won a Visa API competition for its one-step sales platform for retailers and is currently integrating with Visa's APIs. The platform relies on strategic partnerships with companies such as Visa, as well as merchants, bloggers and influencers developing their sales systems with Persello's platform.

While uno doesn't rely on partnerships as Persello does, for Turner it made "absolute sense" for uno to partner with a bank.

"If you can see a shared strategic advantage for where you think the market’s going to end up then partnering is not a dirty word by any measure," he told the summit.

uno's main partner is Big Four bank Westpac, which gave the fintech $16.5 million as part of a strategic partnership. The funds saw uno through to launch its innovative mortgage search platform.

"I think partnering with a bank can make sense because then you can work out what it is that you’re trying to do," he continued.

"The motivation for partnering with a bank is to say that the strategy isn’t to build a shiny front door for mortgage broking, and a great experience on top of that...but it’s actually to work out the different models of lending to market."

While Oleinikova and Turner stuck to their partnership mindset, Stollman did not waver.

"You are basically selling your technology, your idea, your genius. They don’t have to take your risk, they don’t do the heavy lifting or the effort," he said.

"Partnerships with major banks and major institutions; I would advise you to think twice before you do such injustice to your business."