How mmWave 5G will make life easier for travellers - finder.com.au

How mmWave 5G will make life easier for travellers 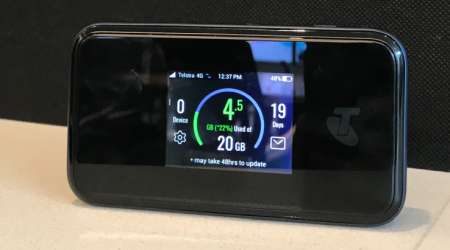 Telstra Wi-Fi Pro trials herald even faster access when you're on the go.

I know, "mmWave" sounds like a long-lost song from Hanson, but it's the next major development in 5G mobile networks, and something that holds a lot of promise for bandwidth-hungry frequent flyers. (I am definitely one of those.)

If you think 5G is the name of a primary school class, check out Finder's 5G primer for the details. The short version? 5G promises higher data speeds and better reliability; all three Australian networks (Telstra, Optus and Vodafone) are rolling it out; your phone needs to support 5G to get the benefit.

2020 is expected to see major growth in 5G. One reason is that a lot more phones are going to support it. In particular, if Apple launches a 5G iPhone, a widely-expected development, usage will grow very quickly. "If that happens this year, that will be very significant because the Australian market is heavily weighted to Apple," Telstra CEO Andy Penn told a media briefing today. "We're on the cusp of the next generation of handsets."

The other reason for growth? The networks are going to keep expanding. Telstra says its 5G network is now accessible to 4 million Australians and in 430 suburbs, and it has 100,000 active 5G customers signed up.

Telstra's main announcement at the media briefing was its plans to experiment with millimetre wave 5G, catchily abbreviated to mmWave 5G. That uses a different frequency band (26Ghz) to Australia's existing 5G networks. Telstra will set up an experimental mmWave 5G network in mid-2020.

The clever part is that 5G devices can ultimately use multiple 5G sources to optimise performance. "Multiple bands will be able to be used on the same devices on the same network," Penn noted.

The first device that can use mmWave will be the Telstra 5G Wi-Fi Pro, a hotspot device which you can use to connect up your other devices (think phone, laptop, Kindle). If you travel a lot for work, then a hotspot can be a more efficient and reliable choice.

That's the good news. The bad news is that you won't see the 5G Wi-Fi Pro on widespread sale in 2020. Telstra will be running a limited trial mid-year, taking advantage of a special testing licence for the mmWave spectrum. Where those services will be tested hasn't yet been revealed. The Gold Coast seems one likely candidate, given Telstra runs an innovation centre there.

Commercial mmWave 5G services can't roll out until there's an official auction of the 26GHz spectrum in Australia, which is expected in the first quarter of 2021.

That doesn't mean you can't take advantage of 5G in the meantime. Plenty of phones already support it, and all three telcos also offer hotspots if you want a device you can travel with. I tested out Telstra's HTC 5G Hub soon after launch last year in several Australian airports, and was pretty impressed with the results.

Speaking of airports, one other thought occurred to me: might the whole Wi-Fi Pro launch be delayed if coronavirus-related airport route shutdowns and supply chain disruption mean the hubs can't be shipped into Australia in the first place? I asked Penn, and he said he wasn't worried.

"I couldn't imagine that being a problem, because we can only do a limited number of trials," he said. So fingers crossed I get to try one out when they do land.