Finder to the Node: Wrapping up this week’s NBN news 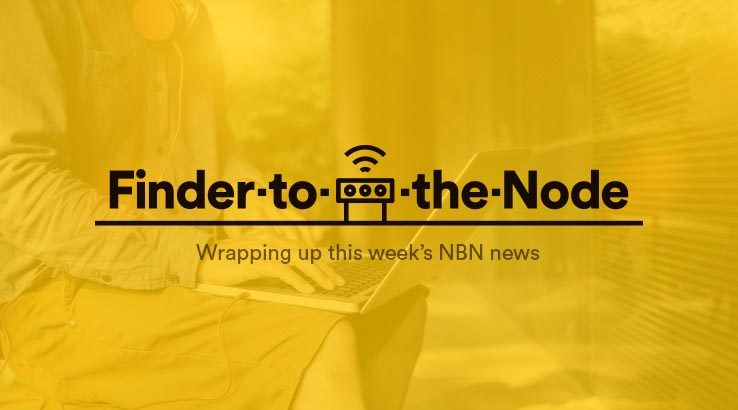 The rollout of the NBN has officially passed the halfway point with more than 5.7 million homes and businesses now able to order a service from their internet provider. NBN Co continues to ramp-up the rollout of the network by adding up to 100,000 new properties to its footprint each week. NBN Co expects three-quarters of the network to be built by the middle of next year with the aim of completing the rollout by 2020.

However, the deployment of the nation’s largest ever infrastructure project has been far from smooth. NBN Co’s decision to deploy the network using a mixture of technologies as opposed to piping full-fat fibre directly into the majority of Australian homes has left many consumers scratching their heads over the set-up process and the speeds that they should expect. What’s more, costly bandwidth charges set by NBN Co has made internet providers gun-shy about buying more capacity on their network, leaving end users with plummeting speeds during peak time usage.

While NBN Co boasts about how the network is now accessible to over 5.7 million homes and businesses, the reality is that less than half of those premises have actually signed up for an NBN service. Those that have made the switch, don't appear to be particularly satisfied either. According to the Telecommunications Industry Ombudsman (TIO), complaints about NBN services from customers more than doubled in the final half of last year.

The bulk of the frustration appears to stem from the speed and reliability of the connection. With over 50 percent of premises expected to utilise the existing underground copper network for the last mile to their homes, which introduces a number of determinant factors as far as speed and reliability are concerned, the trend is only likely to continue.

Similar to ADSL, speeds on an FTTN connection depend on how close your home is to the network infrastructure. The closer you are to the big green cabinet installed in your area, referred to as a node, the closer you will get to those top 100Mbps/40Mbps speeds. This means that unlike a direct fibre connection, also known as fibre-to-the-premises (FTTP), only a limited number of people will be able to achieve top-tier speeds when using an FTTN connection. The quality of the copper that runs down the street and inside the home also has a bearing.

The upside is that NBN Co announced that around 1 million premises will get the newer fibre to the distribution point, also known as Fibre-to-the-Curb (FTTC), instead of FTTN. Designed to bring faster speeds closer to the doorstep, the technology will provide access to services over the NBN network by delivering fibre straight to the driveway and then use the existing copper line into the home. The significantly shorter copper run means that more people should be able to achieve top-tier speeds than would otherwise be possible on FTTN.

NBN published the list of suburbs earmarked for FTTC, and they will now show up on the roll out address checker.

I also discovered that picking the right modem can also have a significant impact on your connection speed. My tests revealed that the difference in sync speeds (the speed at which the modem is synchronising with the NBN network) between the lowest and best performing modem routers was more than 20 percent. This means that you can gain a significant boost in your NBN Internet speeds by simply picking the right modem router for the job.

I also discovered that some models can lock your port despite being advertised as "NBN ready" on the box. I put 17 models to the test to find out which ones produced the best connection speeds without compromising on Wi-Fi performance. The results were quite surprising. In some cases, I found the more expensive models performed worse in terms of Internet connection speeds than some of the more budget-orientated ones. Similarly, some internet provider-supplied models produced slower connection speeds when compared to other models you can buy in stores.

What was perhaps unsurprising is that the modems that use a Broadcom chipset generally produced a faster and more stable Internet connection than the modems using other branded chips (the network infrastructure that powers NBN’s node equipment also use Broadcom). However, what was interesting is that there were a couple of models using silicon from Chinese chip maker, Triductor, that either matched or exceeded the connection speeds achieved on Broadcom models, particularly when it came to downstream (download) speeds.