Finder to the Node: Cheaper fast plans, but is the NBN inherently a disaster? 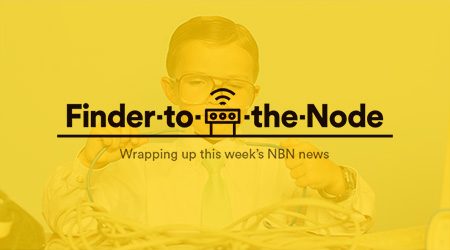 Huawei doesn't mince words while NBN Co prepares for a cheaper 100Mbps NBN tier in our wrap of all the week's NBN news.

Are cheaper 100/20 plans the way to get consumers to upgrade?

NBN Co is consistently seeking to get more Australians to sign up for higher-speed NBN services as it seeks to improve its own bottom line revenues. As ITNews reports, it's examining the possibility of offering a secondary cheaper 100Mbps tier to its internet provider partners.

The new plans would be cheaper than the existing 100/40Mbps plans because it would halve the existing upload maximum to 20Mpbs. Most Australian Internet users are significantly asynchronous in their usage patterns, downloading far more data than they send upstream.

At the same time, if you're already on a 100/40 plan, you should start to see better typical evening speeds, as NBN Co shifts the CVC allowances for 100Mbps plans up by 500Kbps from 2.5Mbps to 3Mbps. Either that or you may see a small price cut on those plans.

ITNews quotes Ken Walliss, NBN Co's general manager of pricing and commercial, as saying that "It is effectively a $4 cost saving for our RSPs - 500Kbps is $4 value".

The 100/20 plan is a prospect that NBN Co is taking to internet providers for consideration.

"It is just a proposal at this stage - it's very much up for industry feedback," Walliss said.

"How we landed there was we look at how residential customers, in particular, are using the 100Mbps service, and what we could see from our work is that they were obviously demanding higher and higher download speeds, but their upload speeds were well below the 100/40 service we provide at the moment."

"We do see an opportunity there that we want to consult with industry about where we reduce the upload speed, and that potentially leads to some cost savings for NBN Co that we're looking to pass onto RSPs as well. That means that the 100Mbps service, particularly for residential customers, can become more affordable."

NBN Co says that its Wholesale Pricing Review Consultation Paper will seek feedback on "how new wholesale pricing and discount constructs may be used to encourage greater take-up of nbn services by under-represented, price-sensitive segments of the market such as low-income earners and older Australians".

NBN Co is seeking feedback on how to lift take-up for under-serviced areas of the community, as well as promoting higher speeds and ways for it to more seamlessly work with its RSP partners in terms of broadband delivery and future pricing shifts.

Brad Whitcomb, NBN Co's Chief Customer Officer Residential said: "As part of our review, we will be seeking feedback on the pricing and discount constructs across our business. We want to provide RSPs with simple wholesale pricing bundle discounts, which will offer them greater flexibility to construct differentiated retail products to better service their customers' needs."

It's no secret that Chinese telecommunications provider Huawei has had a rocky time of late, what with the US government effectively blocking its access to US companies amidst allegations of espionage. That hasn't stopped Huawei from coming out swinging on the NBN debate.

As the AFR reports, David Soldani, Huawei Australia's chief technology officer told an audience at a 5G conference at UTS that the NBN has "failed".

"Australia has somehow managed to invest $51 billion on a network that can't even deliver 50Mbps to around 1 million of its fixed-broadband end-user premises," he said.

"We have spent around $10,000 for every activated premises on the NBN fixed wireless network and yet hundreds of sites are only delivering 6Mbps or less at peak-time to end-users – worse speeds than many were getting on old ADSL services."

Despite not being part of the fixed-line NBN rollout, Huawei is not a disinterested observer here. Soldani's pitch is that the fixed wireless areas of the NBN could be improved with more mobile spectrum and the implementation of 5G mobile broadband. Huawei is currently banned from providing 5G network equipment to Australian networks, something Soldani would like to see reversed.

"It makes no sense for Australia to continue to exclude the world's leading 5G technology provider from the marketplace," he said.