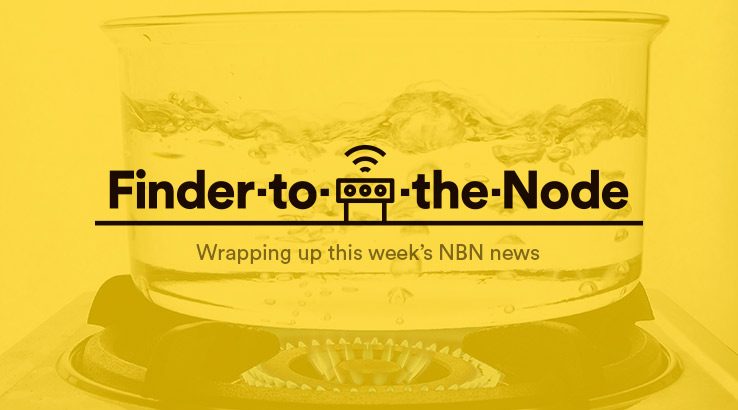 Telstra and Optus land in legal hot water as NBN Co takes Fixed Wireless off the boil in our roundup of the week's NBN news.

The Australian Federal Court has found the advertising of Telstra's "unlimited" mobile data plans to be misleading and deceptive and has granted an injunction to stop the marketing.

The advertising campaign in question made its way onto bus stops, billboards and social media with the tagline "One word from Australia's best mobile network. Unlimited."

In reality, "unlimited" mobile data plans cap the download speed after a certain amount of data is used which, in Telstra's case is 40GB.

According to Justice Gleeson, Telstra's advertisements "falsely convey the representation" that the telco offers a mobile product with no limits on data speeds and data usage, when in fact it "does not offer a mobile product or service that is unlimited".

Justice Gleeson said the speed cap "is a significant limit on usage of the services provided under the plan because the plan does not permit a user to download and upload unlimited volumes of data at unrestricted speeds".

The case was not brought against Telstra by the consumer watchdog but by rival telco Optus who was technically the first to market with "unlimited" mobile data plans before quietly removing the offer, then relaunching it to a limited number of customers.

“Optus took this action because it felt the advertisement was likely to mislead consumers and our actions have been comprehensively vindicated by this judgement,” he said.

Telstra might be the country's first telco to come under fire for its "unlimited" mobile data claims but it certainly won't be the last with the likes of Vodafone and newcomer TPG launching similar limitless mobile data products.

However, a Vodafone spokesperson told Computerworld that it doesn't expect any impact from the federal court ruling as it believes it has gone "above and beyond" to ensure that its advertising of unlimited plans complies with all relevant advertising codes.

In a move that will affect more than 300,000 potential customers, NBN Co boss, Bill Morrow, revealed to a Senate Estimates committee last night that it had dumped plans to provide 100 megabit per second (mbps) speeds on its fixed wireless network.

"We killed it," Morrow told a Senate Estimates committee.

Morrow said consistently achieving 100Mbps would cost "billions and billions of dollars" — a taxpayer spend he described as "outrageous".

"It would just never happen."

The decision came as somewhat of a surprise given that earlier this year the company told Parliament half of its 600,000-plus fixed wireless customers would be able to access top speeds. I say "somewhat" as NBN's fixed wireless network has also been plagued with congestion issues from the start. Last month, NBN Co revealed that only 46.08 percent of its fixed wireless infrastructure averaged speeds above 25Mbps during the busy evening period.

Outside of financial reasons, Morrow says that scrapping the idea of offering speed tiers beyond 50Mbps on the fixed wireless network made sense as "there's not mass-market demand for 100Mbps services".

"There is no economic model that would work … especially when it's hard to find applications that warrant the need for 100Mbps".

All is not lost for fixed wireless customers, however, as NBN Co is also trialling 5G broadband technology which could improve network capacity and speeds in the future.

Optus was hit with a $1.5 million fine by the ACCC for pressuring 14,000 of its cable internet customers to move to the National Broadband Network in as little as 30 days or their services would be disconnected. Under the terms of its contract, Optus could not force disconnection within the timeframe it claimed.

Optus, who is the third largest provider of NBN internet services by market share, also made misleading representations to customers that they had to sign up to Optus’ NBN services, when they could have chosen any internet service provider.

Optus was entitled to receive migration payments from NBN Co for each of its customers that moved from the Optus cable network to an NBN based service. Obtaining these payments became part of Optus’ annual financial targets and was referred to by Optus as “bounty”.

The misleading behaviour took place from October 2015 to March 2017 with the telco benefiting by around $750,000 as a result of the misleading conduct.

"Optus pressured customers by misrepresenting the time period in which services could be disconnected," ACCC Chairman, Rod Sims, said.

"Businesses should not make false representations which distort customers’ decision making. This is particularly important when many Australians are moving to the NBN for the first time."

"It is illegal for businesses to mislead their customers and create a false impression through their communications. Today’s penalty serves as a warning to all businesses that such behaviour will be met with ACCC action."

Optus acknowledged it was wrong in this matter. In a statement, its spokesperson said:

"Optus has written to affected customers apologising for this error and offering compensation to customers that had been disconnected without sufficient notice. Optus has also established a revised set of migration processes for its cable customers that we believe will deliver customers the migration experience they expect."

Since the ACCC began investigating Optus, the telco has paid $833,000 to compensate customers who had their services disconnected.