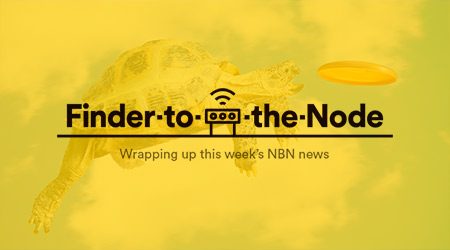 The hype around the quality of 5G networks gains pace as the outgoing CEO casts doubt on mixed technology models in our round-up of the week's NBN news.

Next generation 5G wireless technology promises dramatically faster data speeds over 4G, but its secret weapon will actually be ultra-low latency, a concept that's easily understood but hard to market.

This is why telcos have been fervently showcasing extravagant demos to the media in the lead up to the rollout of 5G next year.

So what is latency and why is it important? Latency essentially is the time gap between a request and a response. In other words, the seconds it takes between when you finish entering a URL in your phone's web browser to the time it takes for the request to be acknowledged by the corresponding server and display on your phone, hinges on the latency of the network.

While 5G is technically capable of download speeds as high as 20Gbps. It also can cut latency down to 1-2 milliseconds (0.001 - 0.002 seconds) from 4G's average 40ms (0.04 seconds), opening the door to a wide array of use cases. The biggest beneficiaries of 5G's ultra-low latency are expected to be in areas such as autonomous vehicles, virtual reality, medicine and the remote control of machinery in the industrial sector.

Yesterday, Telstra demonstrated the benefits a low latency 5G connection can bring to the gaming space by hosting an eSports match where milliseconds can literally mean the difference between winning and losing. The demonstration ran at around 5-6ms which is around five times lower than the average latency of 4G today. The connection delivered data speeds of 3.2Gbps down and 265Mbps up.

Earlier this year, Telstra demonstrated other uses of 5G's ultra low latency such as connected drones that can communicate and adjust flying behaviour based on real time data inputs.

Meanwhile, Optus recently demonstrated a range of applications running on their 5G network including VR and immersive 360-degree video which were all powered from a single, commercially available 5G router.

The standards for 5G will not be finalised until June while the compatible handsets won't be available until the second half of 2019. However, the standard for fixed wireless using 5G has been set with Optus expected to be the first telco out of the gate with their own fixed-wireless 5G service designed for home users arriving early next year.

Outgoing NBN Co boss, Bill Morrow, published a position paper conceding how the increased use of copper in the National Broadband Network has caused poor speeds and problems for the customer.

Morrow admitted that while reusing the copper and HFC networks was slower and more prone to problems than the fibre to the premise (FTTP) model used by the previous Labour government, he still believed it was necessary in order to meet the expected pace of the rollout.

“While the use of the existing copper and pay TV networks has led to a faster network build and a lower cost-per-premises, there are consequences to this approach,” Morrow said.

The first and most notable consequence he noted is the "maximum speed limitations of copper versus the previous-fibre model". However, he also said, in a line that is likely to aggravate most Australians, an independent review concluded that a "minimum peak speed of 15Mbps would be adequate for most households now and into the near future".

"The copper-based FTTN network would, therefore, be sufficient until the demand exceeded these levels."

The use of copper in the last 1km of the network led to an "increased fault rate and operating costs versus the all-fibre alternative".

Morrow says that the third main consequence of using copper and HFC is the co-existence period in which FTTN and ADSL, or HFC and Foxtel services run simultaneously for a period of 18 months. During this period, maximum connection speeds are purposely reduced on HFC and FTTN services to avoid disruption to legacy phone lines and pay-TV connections.

"As a result the minimum target speed for services on the FTTN network during coexistence is 12/1Mbps. At the end of the co-existence period, NBN Co can optimise node configurations and maximise the speeds achievable for services and move to the expected minimum peak data speeds of 25/5Mbps."

Morrow added that "this co-existence was considered as a reasonable trade-off to the faster rollout and lower cost associated with the build".