Finder to the Node: Does 5G really threaten the NBN? - finder.com.au

Finder to the Node: Does 5G really threaten the NBN? 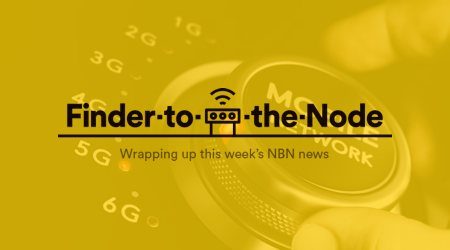 NBN competition heats up as Optus plans to rollout a 5G-powered fixed-wireless service aimed at city users by early 2019.

There has been a lot of talk about 5G posing a real threat to the NBN and Optus has just added more fuel to the fire with the announcement of its plans to deploy a fixed-wireless Internet service based on the next-gen mobile network to metropolitan areas in early 2019.

This announcement follows Optus's launch of a successful outdoor trial for 5G New Radio, which showed 2Gbps (two gigabit per second) download speeds using a fixed wireless in-home modem device. Telstra is also preparing to rollout its own 5G network next year, but has not yet announced any plans for a fixed-wireless 5G service designed for home users.

To date, providers building out their own NBN-like services using fixed wireless have been in regional and rural areas, targeting NBN blackspots or areas where NBN's services are slow or unreliable, but this is the first time we are seeing a major player take the lead towards a faster brand of fixed-wireless in metropolitan areas.

“Everyone has heard of concepts like self-driving cars, smart homes, AI and virtual reality; however, their full potential will require a fast and reliable network to deliver,” Optus Managing Director of Networks, Dennis Wong, said.

“Seeing 5G data speeds through our trial that are up to 15x faster than current technologies allows us to show the potential of this transformative technology to support a new ecosystem of connected devices in the home, the office, the paddock and in the wider community.”

5G stands for "5th generation mobile" and builds upon today's 4G mobile network technology, but promises to offer much higher peak connection speeds and lower latency. While 5G trials by the likes of Optus and Telstra have yielded speeds beyond 1Gbps, in practice it will likely provide download speeds around 100Mbps or higher which is why it poses a genuine threat to the NBN. You can read more about 5G here.

However, 5G is constrained by capacity where the actual speed of connection for an individual decreases as the number of users increases – an issue that a fixed-line network like the NBN doesn't need to contend with (provided ISPs buy enough bandwidth from the network builder). This limitation of 5G and mobile networks in general is the reason why we see significant data download limits.

That said, Optus has made some real strides in this area offering 140GB mobile data plans on its 4G network for as low as $70 a month. Optus also has some experience selling wireless products aimed as fixed-line substitutes through its VividWireless brand where it offers unlimited data on Optus's 4G LTE network for $90 a month though speeds are limited to 12Mbps.

Telecoms analyst, Paul Budde, says that Optus will initially limit its 5G fixed-wireless service to 25Mbps, indicating that the telco is aiming at the sweet spot in the market where 5G can compete effectively against the NBN. He added that higher speeds will come but they will be sold at higher prices similar to how ISPs break up their NBN plans into different speed tiers.

"The sweet spot for 5G is indeed at the bottom end of the broadband market, the group of customers that don't download movies every night and have a relatively moderate broadband use," Mr Budde said in a blog post.

"Theoretically at least, this is where 5G will be able to deliver a similar or better performance than the NBN at a competitive price. Optus will most certainly make this as attractive as possible by bundling 5G products with their existing mobile service."

One such bundle opportunity could come in the form of data pooling between mobile and fixed wireless services. Currently, Optus allows its customers to combine their mobile plan data quota with their mobile broadband plan, giving users the ability to share their total monthly data between devices. It's unclear whether Optus will offer data pooling with a 5G fixed-wireless service, but if they do, it could open the door to larger data caps.

It's worth noting that fixed wireless means that the 5G service will be delivered to a fixed spot in the premises – like current fixed modems – so it is technically different from a mobile service on a smartphone which might prevent Optus from offering data pooling with its fixed wireless plans.

Meanwhile, nbn doesn't see fixed wireless and mobile services as direct competitors as it argues that they can't match the download quotas or prices of its fixed-line services.

"Whilst future 5G services are likely to deliver very high speeds, they will find it hard to deliver the kind of data allowances to consumers that are available from retailers delivering services to end-users on the NBN network," says nbn spokesperson Tony Brown.  "At present, NBN end-user premises are already downloading a monthly average of close to 200GB per month compared to the average mobile download of below 3GB per month on mobile handsets."

nbn has announced that Telstra, Vocus and TPG have begun trialling its new direct fibre product called "Enterprise Ethernet" aimed at delivering 1Gbps symmetrical speeds to large businesses and government customers, ahead of a full launch later this year.

nbn's Chief Customer Officer John Simon says that the product is designed to bring more choice to the market and will provide large organisations with the ability to run data-intensive applications such as Virtual Private Networks (VPN), multiple voice lines and cloud-based solutions.

“In the early stages of the trial, participating phone and Internet providers will identify a number of business customers with varying construction and broadband requirements, where our focus will be on testing the infrastructure design and build.

“As we near closer to launch, we will begin to test the performance of the product as well as internal processes to ensure we are positioned to meet the growing needs of enterprises. The trial will give retailers the opportunity to provide feedback on the design and delivery of the product and ensure it is a competitive and valuable option for their enterprise customers."