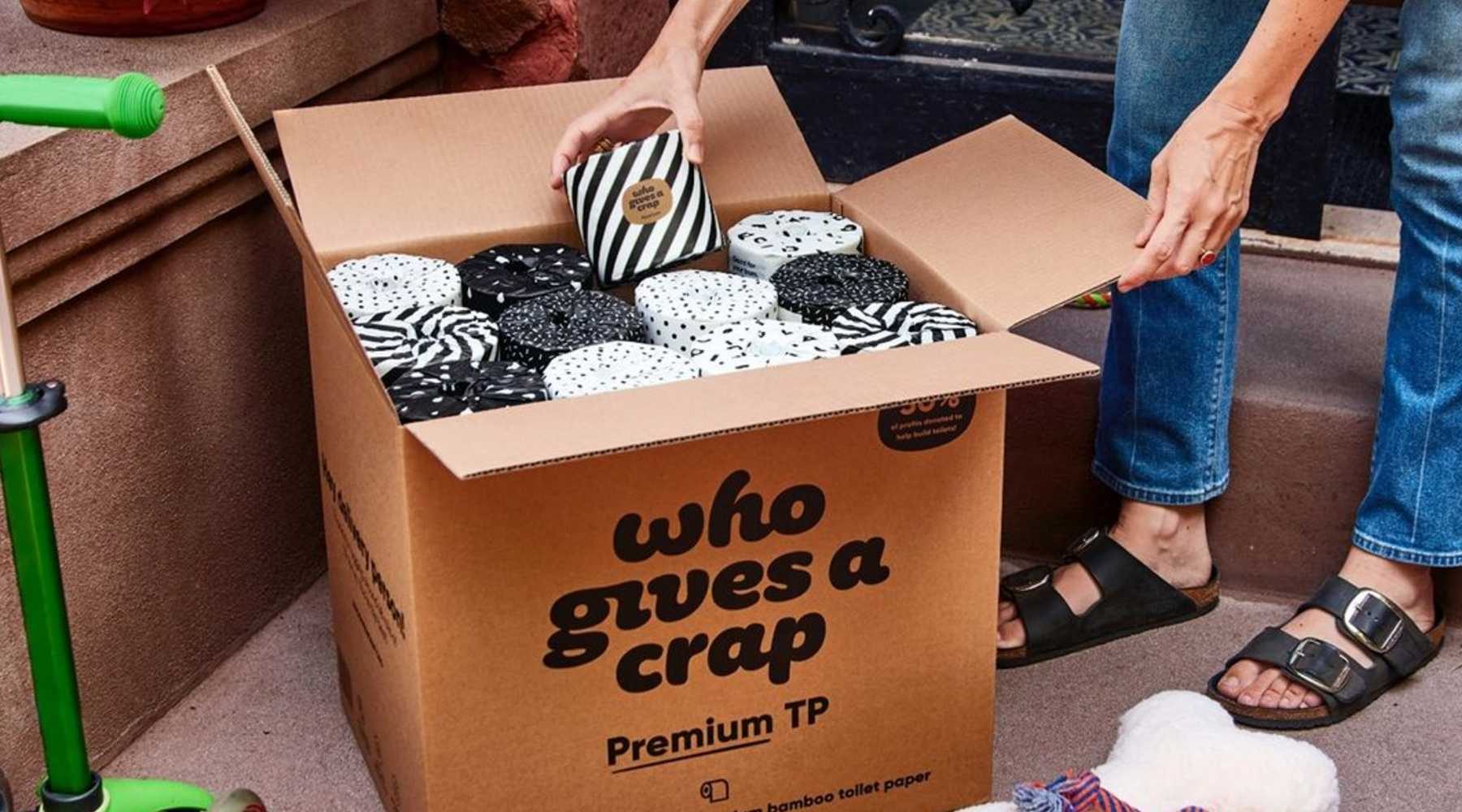 Sustainable toilet roll that pays for toilets in the developing world.

Toilet roll probably isn't the first place you start on your personal mission to reduce your environmental impact. It certainly wasn't for me anyway. But after seeing the unmistakable "Who Gives a Crap" logo in one too many restaurant bathrooms I decided to do some research and what I found was quite shocking.

According to research from the World Counts, 42 million tons of toilet paper is used every year – that's about 184 million rolls. More importantly, that equates to around 712 million trees a year being used to make toilet roll alone. On top of this tree-destroying production rate, most toilet roll is then packaged up with plastic that goes on to create even further environmental issues when it finally ends up in landfill or in the ocean.

At the same time, over two billion people around the world don't have access to a toilet and this has a huge knock-on effect. It is estimated that around 289,000 children under five die every year from diarrhoeal diseases caused by poor water and sanitation.

Who Gives a Crap exists to solve these two problems. It provides a direct-to-consumer toilet roll subscription service that specialises in sustainable, plastic-free products whilst also donating 50% of its profits to charities that build toilets and improve sanitation in the developing world.

What makes Who Gives a Crap toilet paper environmentally-friendly?

Who Gives a Crap offers two types of environmentally-friendly toilet paper. The standard option is also the most eco-friendly one as it is made from 100% recycled paper. That means no additional trees were cut down to make these toilet rolls.

The premium toilet roll option is more expensive and slightly less sustainable as it is made out of bamboo fibres. Whilst that might sound like moving from trees to bamboo shoots, bamboo is actually a grass that grows incredibly quickly. This means that you can make toilet roll out of it at a much more sustainable rate. The cheaper 100% recycled rolls are the better option if environmental impact is your main concern though.

The good environmental news also doesn't stop there because Who Gives a Crap uses absolutely no plastic packaging. From the cardboard box it arrives in, to the colourful paper that wraps each roll, to the cardboard cylinder at the core, everything is 100% recyclable.

We were also pleased to see that it offers carbon neutral delivery as standard and were even happier to see that the business is B-Corp certified meaning it meets high external standards on social and environmental impact.

I've now been using Who Gives a Crap for around 18 months and I absolutely love it.

The subscription business model means that I haven't even nearly run out of toilet roll since we started ordering. This was particularly useful at various points during the COVID-19 pandemic when toilet roll became a very valuable asset.

The online ordering system is also slick and has never failed us. You receive an email a week before any delivery is sent and you can easily delay by a month or two if you still have a toilet roll surplus. We found this particularly helpful as we seem to take longer to use the toilet roll than Who Gives a Crap estimates. There are two adults living in my apartment (that have mostly worked from home for the last 12 months) and we've found it takes us between 4-6 months to use 48 rolls.

Another surprising perk is that the colourful toilet roll can actually be recycled creatively in the form of gift wrapping. The patterns are so visually appealing that many of my friends have received gifts from me wrapped up in toilet roll packaging this year and have been none the wiser.

After our first order, it is worth noting that we did upgrade from the 100% recycled paper option to the premium bamboo alternative. I loved the colourful wrapping and the sustainability credentials of the cheaper option but I found that it was a bit too thin compared to the toilet paper I was used to. Since we've switched to the bamboo option we've never looked back.

Probably the biggest downside of the Who Gives a Crap model is finding somewhere to store 48 toilet rolls when they've just arrived. This might be a particular issue if you live in a small apartment but even in our one-bedroom flat we've found lots of little places where we can stash them away until we need them. You can also order fewer rolls more frequently but we've managed to avoid doing this.

It's also worth noting that pricing is very competitive. We've been paying $56 for 48 rolls of the premium toilet paper but it looks like this has now increased to $60 which works out at $1.25 a roll. This is for a double-length roll which means twice the amount of paper compared to most rolls.

In comparison, a 6 pack of Icare 100% Recycled Double Length toilet roll from Woolworths costs around $6.50 or $1.08 a roll, whilst an 8 pack of Quilton Double Length toilet roll costs $9.50 or just under $1.19 a roll. Personally, I am very happy to pay a few cents extra per roll to support an Australian social enterprise doing such important work.

Who Gives a Crap is only available for purchase directly from the website. At the time of writing, a 48 pack of the 100% recycled toilet rolls would set you back $52 whilst a 48 pack of its premium bamboo option costs $60.