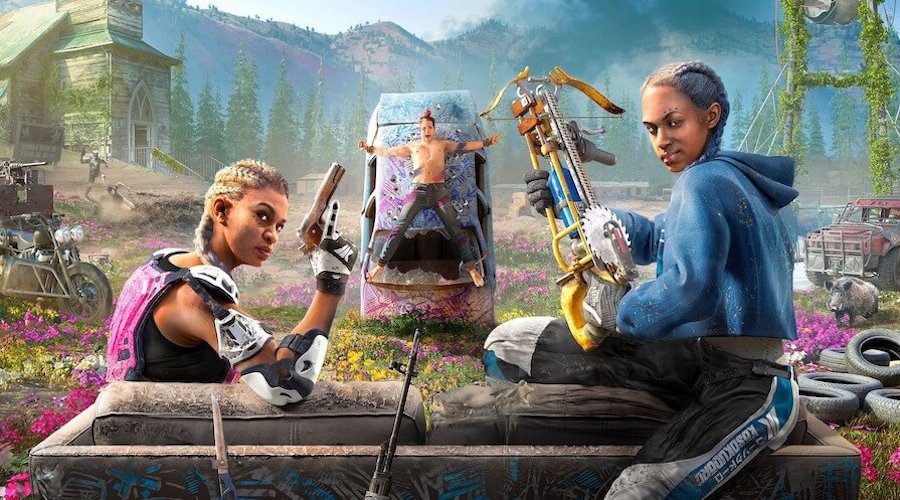 Far Cry 5's co-op hijinks are still rad but this mad-cap spin-off can easily be missed.

As far as standalone sequels go, New Dawn really isn't a far cry from, well, Far Cry 5. It's a repaint of Far Cry 5 and in hot "post-apocalyptic" pink, no less. You're staring down the (double sawed-off) barrels of a Mad Max-style epilogue. It's a chance to smell the ashes of nuclear fire by making a return trip to [Bugger All] Hope County. Also, if we're being brutally honest here, New Dawn represents a cost-effective means for Ubisoft to slide out the same old sandbox, sprinkled with extra grit.

Don't get me wrong here. Spin-offs aren't necessarily a bad thing if they're executed with a bit of flair. Also, if I sounded pessimistic before, chalk it up to being forced to play and preview an inordinate amount of depressing, dystopian games lately. Seriously, though, Fallout 76, Metro: Exodus, The Division 2, Rage 2 and Days Gone? The End Times are hotter than an irradiated Hansel right now. 2019 has basically become a Thunderdome where ten bleak shooters shall enter and only one will leave (in your shopping basket at full RRP).

It's a shame then that this particular Far Cry spin-off isn't firing on all guzzoline-soaked cylinders. The goal Ubisoft should have shot for, in my mind, was 2003's Far Cry 3: Blood Dragon; an adventure that was radically different across the board, be it in terms of visual aesthetic, storyline, weaponry and tone. In comparison, New Dawn makes mild tweaks in a few of those key areas but simply doesn't go far enough. In fact, some of the new changes it brings to the table will feel immediately detrimental to anyone who dropped serious hours into Far Cry 5.

For reasons I cannot explain, 17 years after the nukes, people just got harder to kill all of a sudden. New Dawn layers in excessively large health bars and erupting damage numbers that feel like a hasty cross-pollination from The Division. All weapons and enemies are graded into one of four tiers. If you shoot a rank 1 enemy with a rank 2 weapon, they'll drop quicker than a Marshmello bassline. Use that same gat on somebody who shares your rank 2, and you'll feel slightly miffed when they shrug off a few .50 rounds before joining the choir invisible. And so it goes, the bigger the mismatch between ranks, the less happy one party is going to be. 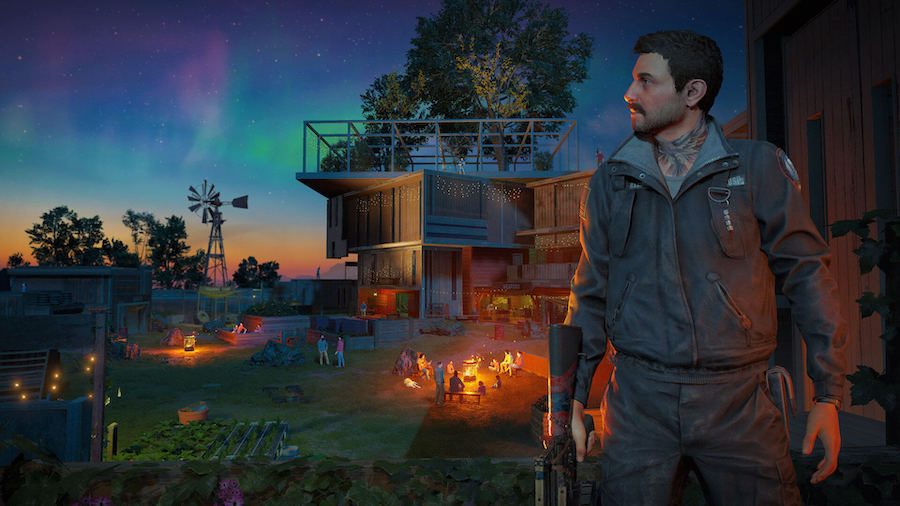 Pretty soon you'll get cocky and travel a bit too far North to encounter folks who sure look like the usual pushovers, but they can magically absorb sniper rounds like body-piercings, or a flamethrower bath that'd flash-fry a rhinoceros. If you've arrived fresh into New Dawn with no prior experience Far Cry, that'll feel fine and dandy (almost like playing some sort of non-cel-shaded Borderlands sequel). But here's the rub: veterans transitioning from Far Cry 5 will instantly find the opening hours to be an unnecessary slog steeped in artificial difficulty.

That general sense won't improve when those folks realise how much looting/crafting busywork stands between them and acquiring weapons that...yeah, behave much like they always did (only this time you'll have to craft them a few times to make 'em look increasingly edgier and therefore more potent). Pretty soon you're roped into sniffing out crates full of crap to build guns of a specific type and rank just to satisfy the skill-based challenges that earn you precious perk points. Worse, these are spent on unlocking mechanics your avatar ought to already know (like holding a few guns or having the knowledge to stealth kill certain enemies).

the less said about the microtransaction options the better

Once again, don't get me wrong. I'm not against some grind, but New Dawn comes close to taking the piss with its rampant kleptomania. And the less said about the microtransaction options labelled "buy moar crafting materials" and "buy perk pointz", the better. That's more on the nose than a dead demon fish. Which is an actual thing to catch in this game (the fishing's still the reel deal, folks).

On the topic of gameplay loops, in order to keep the story missions flowing you'll need to engage in some outpost renovation work, both enemy and allied. Your home digs, Prosperity, is more or less that crappy little fort from Mad Max 2, sans a feral kid with a super sweet razor boomerang. In each major act of the game, you're expected to go out and secure an increasing number of Specialists, and you'll also have to secure ethanol to improve various stations. This will expand your shopping selections, make you more powerful and give you helicopter access to Expeditions (more on these in a sec).

Increasing your ethanol supply is done by visiting enemy outposts, killing every squatter in there, and then anteing up and doing it all over again. Every time you scuttle the cubby houses of these psychopaths they'll respawn back angrier, sporting larger mohawks and additional defence systems are randomly installed. It's a simple gameplay wrinkle that I nevertheless got hooked on.

Too often does their dialogue shoot for "wacky" and hit annoying

Meanwhile, the task of gathering Specialists is par for the course side-missioning; just travel to a face icon on the map, do some legwork for said survivor and get them to move into Prosperity. I loved the majority of Specialists that were returning faces from Far Cry 5 or were relations of them. I didn't really warm to a few younger "grew up in the pocky-lips" characters. The Bible said the meek would inherit the earth. It feels like a bunch of dysfunctional morons did instead. Too often does their dialogue shoot for "wacky" and hit annoying.

Speaking of writing, New Dawn has some hits and misses when it comes to your new allies and antagonists. On the positive side: there are some tender moments where you'll connect and start to care about salt-of-the-earth residents, like the Rye family and Thomas Rush (he's a more affable Max Rockatansky). That said, the two-dimensional antagonists that are The Twins can't hold a candle to Vaas Montenegro, Pagan Min or even Joseph Seed. 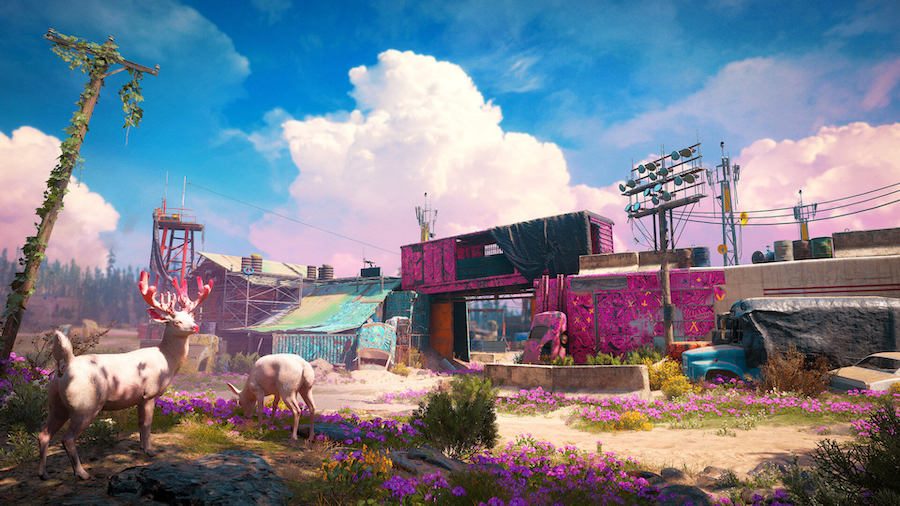 Fortunately, and without revealing too much, the cult founded by the latter does resurface. It soon becomes apparent that you'll need to parlay with the enemy of your enemy, and this jagged alliance turns out to be a decent yarn with some interesting twists. Despite myself, I also got drawn into unravelling the fates of the original landmarks and residents of Hope County. You know, that old morbid curiosity chestnut.

Honestly, the only feature of this game that truly held me in thrall was the aforementioned Expeditions. In a nutshell, it allows you to exfiltrate to other locations in the United States to baddie outposts that are teeming with enemies and a big box of rare resources. Though these mini-sandboxes are vastly smaller, the breath of fresh air that comes from just being somewhere that isn't Montana can't be understated. Likewise, the heist feel of Expeditions offer some of the most challenging and rewarding action in the game. I just wish there were more of them.

Far Cry: New Dawn was reviewed on PlayStation 4 with a copy provided by the publisher.

When the sun set on this adventure, it dawned on me that there simply wasn't enough new about it. A lot of the differences between this game and what you finished last year will feel skin deep. That said, it ought to be noted that this spin-off was spun from a very sharp original product (particularly in the area of co-op hijinks, which return here again). Far Cry New Dawn looks like an Immortan Joe promise of a better world, all shiny and chrome, but what you're getting is something non-essential that doesn't really demand be witnessed.